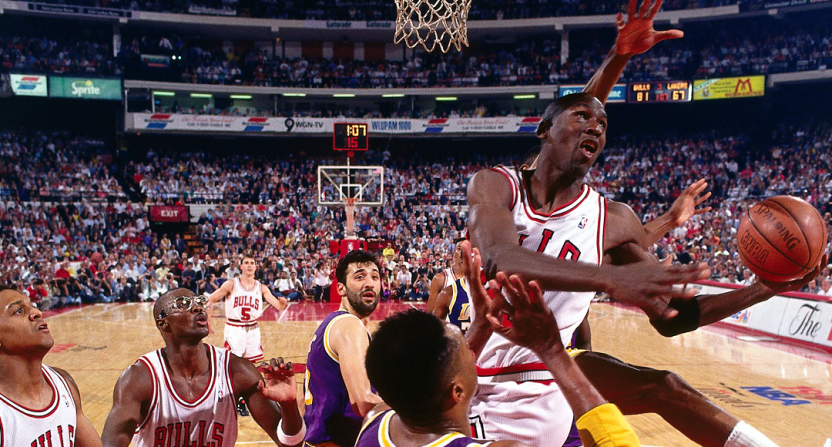 In the ultracompetitive ecosystem of the NBA, there’s always someone better, stronger, faster on the rise. No one stays on top forever. And sometimes you get to see this evolution in real time.

For over a decade (1980-1990), the NBA was dominated by the Los Angeles Lakers, the Boston Celtics, and the Detroit Pistons. One of those three teams won the championship every year – with the lone exception of the Philadelphia 76ers in 1983. This is the era when the league transitioned from the NBA Finals being televised on tape delay to becoming must-see TV. This is the league that Magic, Bird, and Isiah built.

Jordan’s first championship with the Chicago Bulls in 1991 was a seminal moment for the league. Not just because it was the start of a dynasty that would usher in an unprecedented financial wave and international reach. It also marked the end of the NBA’s old guard. The megastars of the 80s were done. A better, stronger, faster model had arrived. Magic Johnson, with his career interrupted for four years by his HIV diagnosis, never returned to the NBA Finals. Neither did Larry Bird and his bad back (retired in 1992), or Isiah Thomas and his Bad Boys.

Jordan’s ascension seems obvious in hindsight. But there were skeptics. The perception of Jordan as more of an exciting curiosity than an inevitable champion was a thing that happened. In the minds of many, he was a shorter Dominique Wilkins: a scoring machine who wasn’t going to win anything substantial because he dominated the ball too much.

So, when the Bulls (finally) vanquished the Pistons to reach the Finals, it might surprise you to learn that Chicago was NOT the favorite to win it all. Nope. That money was on the established power – the Lakers.

Los Angeles was coming off one of its most satisfying playoff victories in franchise history. The Lakers had just stunned the Portland Trail Blazers (a regular-season best 63-19 record) in six games. Magic Johnson played some of the best basketball of his storied career in that series.

The 1991 NBA Finals was going to be a referendum on Magic vs. Michael. Who was better? If you were older, you favored Johnson. Younger? You were a Jordan guy.

But who would doubt Magic again? He was the ultimate winner, epitomizing team basketball. Surely the same veteran savvy he used to upend Portland would come into play against Chicago (61-21). The Bulls were perhaps too young, too inexperienced, and maybe a little too just-happy-to-be-there after getting past their nemesis, the Pistons. Magic, 32, was going to take the 28-year-old Jordan to school.

After Game 1 of the NBA Finals, it seemed like many experts would be proven right. Magic Johnson’s triple double (19, 11, 10) bettered Michael Jordan’s 36 points. Johnson’s final assist to Sam Perkins for a three-point basket put the Lakers ahead for good, as they won 93-91 in Chicago.

Then suddenly, evolution kicked in.

What was supposed to be a competitive series was over in five games. Chicago won the next four to claim its first NBA title. The Bulls’ length, quickness, and young legs were too much. This was symbolized by Jordan’s iconic hand-switching layup.

The NBA’s old guard was officially done. There was a new king. Jordan had his championship and was the Finals MVP after averaging 31.2 points, 11.4 assists, and 6.6 rebounds. He was undeniably the best basketball player in the world. This first title would start his climb to becoming the most recognizable person on the planet.

This passing of the torch was a necessity to elevate the NBA into a global sport. Other stars would come into their primes during the Jordan title era: Clyde Drexler, Charles Barkley, Hakeem Olajuwon, Gary Payton, Karl Malone, and John Stockton. The only one to have championship success was Olajuwon, who won his titles when Jordan was away playing baseball.

Magic, Bird, and Isiah were surpassed by someone better, stronger, faster. That never really happened to Jordan, who retired after his sixth title when Chicago management broke up the team in 1998.

If Jordan’s Bulls had stayed together, who would’ve eventually eclipsed them? We’ll never know. But the next generation of the champions followed: the San Antonio Spurs of Tim Duncan and David Robinson, and the Lakers of Shaquille O’Neal and Kobe Bryant.

Because Jordan retired on top (the second time), his aura is forever frozen in time. Surprisingly, we almost pretend as if the Washington Wizards years (2001-02 and 2002-03) didn’t exist – a figment of our imagination. He’s still the guy who went 6-for-6 in the NBA Finals. The GOAT.

Jordan never had to experience the pain of someone better, stronger, faster wrestling his greatness away.