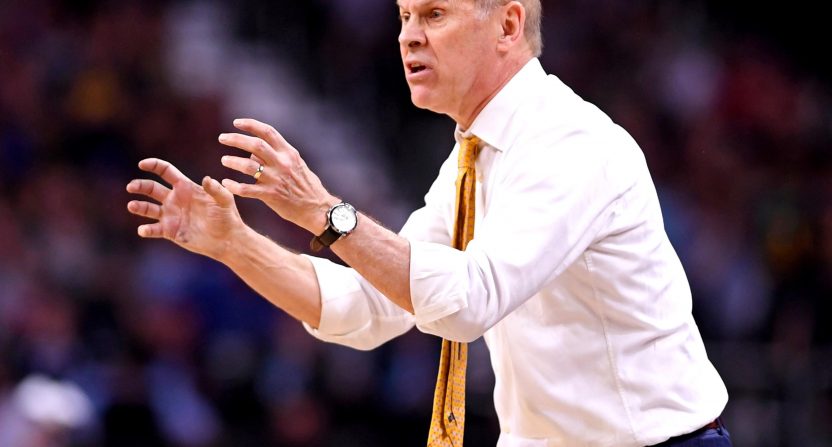 The Detroit Pistons need a new head coach and they’ve cast their net far and wide to find out.

Instead 0f looking to the usual suspects and NBA head coach retreads, the Pistons have reportedly invited people such as TNT analyst Kenny Smith, Miami Heat assistant Juwan Howard, and Dwane Casey, who was recently fired by the Toronto Raptors after winning the NBA Coach of the Year Award.

You can also add Michigan Wolverines head coach John Beilein to that list, per ESPN.

It’s a surprising and curious development. Beilein, who has been with Michigan since 2007 and has led the Wolverines to two national title games, including last season’s championship, said earlier this month that he and the school were in the midst of renegotiating his contract. “As a matter of fact we are [talking about that],” Beilein said on May 15. “[Athletic director] Warde [Manuel] and I have been so busy and apart, but we’re working on that right now. So stay tuned.”

Stay tuned we did, but nothing was ever announced. The school’s all-time leader in wins (248) received an extension in November 2015 for $3.37 million per year and a contract that lasts through 2021.

It’s entirely possible that because Beilein and the school were unable to come to terms with a new extension, he’s forcing their hand by showing them that he has options. There’s no better way to make boosters and fans nervous and make them itchy to get a coach locked down than by making it seem like you might bolt.

It’s not out of the realm of possibility either as the 65-year-old may want to try his hand at the NBA once before he retires just because he can. Of course, he’s also got a great thing going at UM and if he gives that up it’s unlikely he’ll find a scenario that’s as good if he decides to come back to the NCAA afterward. It’s also worth keeping in mind that the Pistons aren’t exactly the best situation for a coach to walk into. They’ve got most of their money tied up in Blake Griffin and Andre Drummond for the foreseeable future and it’s unlikely they’ll be able to make enough moves to compete. All signs point to this hire being a placeholder. So would Beilein really want to give up what he’s got for that?

The school could try to call Beilein’s bluff, assuming that he won’t actually want to make the jump. However, it’s possible that locking him down with a new extension right now to end this drama is a small price to pay for security and to keep fans happy. And it’s very likely that’s what this is all going to be about.

Not to mention that we don’t want John to leave the college game because chances are we won’t get to see moments like this anymore.