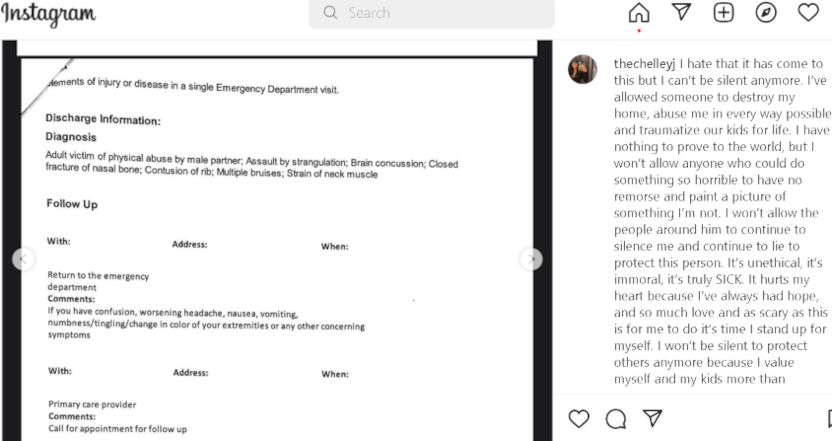 On Wednesday, NBA free agent forward Miles Bridges was arrested in Los Angeles on charges of felony domestic violence. Bridges turned himself in Wednesday after a physical altercation Tuesday was reported to police, and he was released on $130,000 bail, with a court appearance set for July 20. Here’s how TMZ initially reported this:

Law enforcement sources tell us a woman claims she was in an argument with Bridges that turned physical. We’re told police were called to the scene, but Bridges was gone by the time cops arrived. We’re told the woman required medical attention.

Late Thursday evening, Bridges’ wife Mychelle Johnson posted photos of herself to Instagram that she said showed injuries she sustained from the 6’7”, 225-pound Bridges, along with a statement alleging sustained abuse from him. Here’s that post:

And here’s the statement Johnson (a former NCAA women’s basketball player for Middle Tennessee State and Marshall, who’s been married to Bridges for years and has two kids with him) posted with it:

I hate that it has come to this but I can’t be silent anymore. I’ve allowed someone to destroy my home, abuse me in every way possible and traumatize our kids for life. I have nothing to prove to the world, but I won’t allow anyone who could do something so horrible to have no remorse and paint a picture of something I’m not. I won’t allow the people around him to continue to silence me and continue to lie to protect this person. It’s unethical, it’s immoral, it’s truly SICK. It hurts my heart because I’ve always had hope, and so much love and as scary as this is for me to do it’s time I stand up for myself.  I won’t be silent to protect others anymore because I value myself and my kids more than anyones ‘image’.

…a fracture nose, wrist, torn eardrum, torn muscles in my neck from being choked until i went to sleep and a severe concussion. I don’t need sympathy, I just don’t want this happening to anyone else, I just want this person to get help, my kids deserve better. That’s all i want. It hurts, everything hurts, this situation hurts, most importantly I’m scared and hurting for my kids who were witness to everything. Please respect my families privacy and stop with the disgusting rumors and allegations.

That post also included a photo of a hospital report detailing her injuries, as seen at the top of this post:

Those are certainly significant allegations of abuse against Bridges. And there may be some question of if he plays in the NBA again any time soon. The 24-year-old Bridges was drafted by the Charlotte Hornets 12th overall in 2018 following his career at Michigan State, and he’s posted some impressive stats with them, including career-highs in games played (80) and minutes (35.5), points (20.2), rebounds (7.0), and assists (3.8) per game this past season. But he has had some lower on-court moments as well, including a $50,000 fine for throwing his mouthpiece at a fan following an ejection in an April 13 play-in game.

Now, Bridges is facing this wave of allegations of severe abuse against him, and pending criminal charges. He’s a restricted free agent thanks to the Hornets making him a qualifying offer Wednesday. But these allegations and charges may make it difficult for any team to justify signing him at this point.