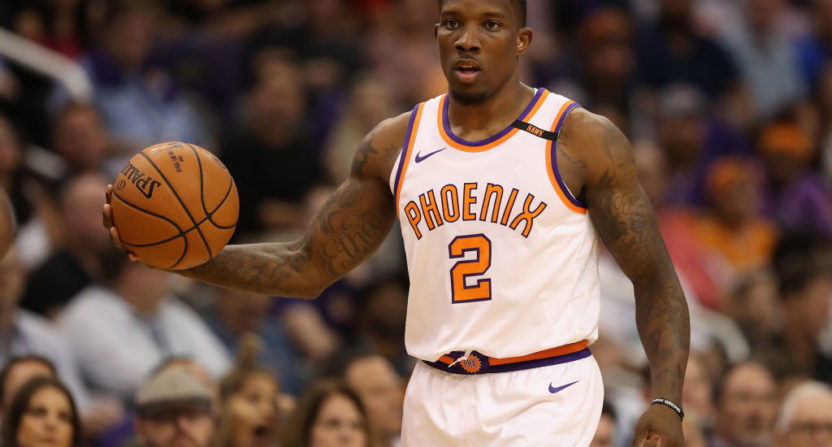 The Milwaukee Bucks have been one of the biggest disappointments of the very early NBA season. After entering the campaign as a trendy pick to rise near the top of the Eastern Conference, the Bucks have sputtered to a 4-5 start, with losses to the Hornets and Pistons. Though nine games hardly constitutes cause for serious alarm, Milwaukee certainly has not sprung from the gates the way coach Jason Kidd and company might have hoped.

Well, help is on the way.

ESPN’s Adrian Wojnarowski reported Tuesday that the Bucks have filled arguably their biggest hole, acquiring point guard Eric Bledsoe from the Suns in exchange for Greg Monroe and a first-round pick.

Phoenix finalizing deal to send Eric Bledsoe to Milwaukee for Greg Monroe and a first-round draft pick, sources tell @ZachLowe_NBA and me.

Amid several years of dysfunction in Phoenix, Bledsoe has quietly been a rock-solid two-way player. Last season, he averaged 21.1 points, 6.3 assists and 4.8 rebounds per game, while dragging a bad Suns team. His defensive efficiency numbers have slipped over the past year or two, but we can chalk that up somewhat to the offensive load he bore in Phoenix. Only a few years ago, he was one of the best defensive point guards in the NBA and he still retains that skillset. He should be stronger defensively and more efficient offensively in Milwaukee, where he will be asked to do less. At 6-foot-1, Bledsoe has a 6-foot-7-inch wingspan and fits well on a Bucks team stocked with long, athletic players.

Suddenly, the Bucks look pretty fierce on paper, especially in a weak Eastern Conference. In Giannis Antetokounmpo, they have one of the 10 best players in the NBA and arguably the league’s fastest-rising star. In Malcolm Brogdon, they have a savvy and versatile reigning rookie of the year. In Khris Middleton and Tony Snell, they have solid veterans on the wings. In the injured Jabari Parker, they have a potential star who could return in time for the end of the season. And in Bledsoe, they have the true point guard to (hopefully) bring it all together.

Bledsoe’s arrival will obviously strengthen the Bucks’ starting lineup, but it will just as importantly strengthen the team’s bench, with Brodgon or Snell joining a second unit that hasn’t offered much this season. If Parker returns this winter, as expected, this team will be much more than just Giannis and friends. It will be a true threat in the Eastern Conference playoffs.

As for the price Milwaukee paid for Bledsoe (who torpedoed Phoenix’s leverage by tweeting his displeasure), Monroe is eminently replaceable, and the draft pick will likely come in the latter third of the first round. Not a bad price tag at all for a potential top-rate point guard. That the Bucks pulled of this trade without including Parker or Thon Maker is a win both in the short-term and the long-term.

Bledsoe is under contract for this season and next, and the question is whether Milwaukee can win anything during that time. As usual, the Eastern Conference is weak after its top tier, so the Bucks should make the playoffs easily and likely secure homecourt advantage in the first round. Adding Bledsoe is about striving for that next level. Whether they can get past either the slumping Cavaliers or the surging Celtics and reach at least the Eastern Conference Finals with their new point guard at the helm will determine whether Tuesday’s trade was successful.