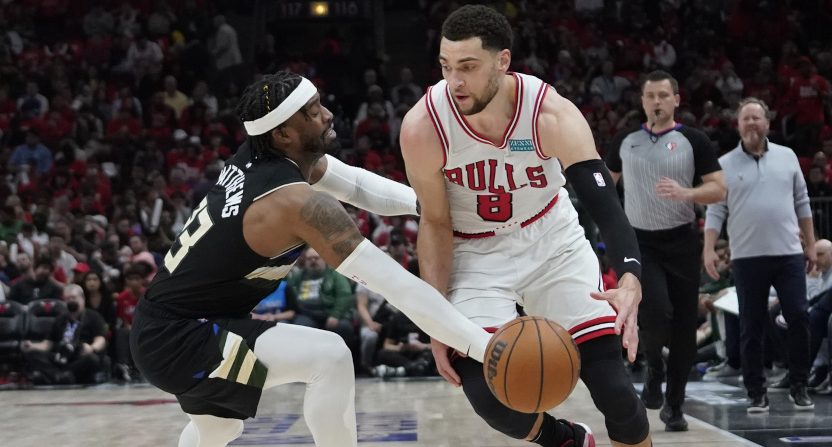 The Milwaukee Bucks have gone up 3-1 in their first round series against the Chicago Bulls, a series that once looked perilous for the Bucks when Khris Middleton went down with a sprained MCL. But Chicago has scored more than 100 points only once in this series.

There are a number of culprits for the Bulls’ offensive ineptitude. Chicago’s lack of depth and shooting has not helped them; beyond their big three, they are sorely lacking in quality rotation players. But the fact remains that they have three All-Star caliber bucket-getters in Zach LaVine, DeMar DeRozan, and Nikola Vucevic. Milwaukee has shut them down.

The Bucks have shown how important it is to have perimeter stoppers. It has been a postseason dominated by versatile, switching defenses. Miami, Boston, and Dallas are wreaking havoc in that style, and a team not known for its switching (the Suns) has been shell-shocked by an upstart team. Milwaukee is going over and under screens and refusing to switch everything.

Two factors make the Bucks’ style possible. For one, they have shutdown perimeter defenders. Jrue Holiday, Wesley Matthews (seen at top defending LaVine), and Jevon Carter take turns guarding LaVine and DeRozan, and all are dogged, physical defenders who fight hard around screens and deny shots. They rarely get beat off the dribble.

The other factor is lengthy help defenders and rim protectors — namely, Giannis Antetokounmpo. The perimeter guys shade LaVine and DeRozan into the arms of Giannis, Brook Lopez, and Bobby Portis, who barricade the paint and discourage jumpers.

It reminds of the style of defense that the Bucks used in the Finals last year to harass Chris Paul and Devin Booker. Holiday is arguably the league’s best perimeter defender. LaVine can’t score against him one-on-one:

Holiday is up on him at all moments, mirroring his moves and keeping his hands in the right spots. Isolations against him are a fool’s errand.

To overcome this problem, the Bulls run high volumes of pick and roll with Vucevic as the screener, with LaVine and DeRozan trying to shake their defenders. The Bucks play aggressively, with the center (Lopez, Giannis, or Portis) meeting the ball-handler at the perimeter. This is what DeRozan and LaVine see when they come off of screens:

Lopez in the past has had issues playing any coverage other than drop, which allows him to back up toward the rim. Here, though, the pressure isn’t on Lopez to deal with speed. He just has to be a presence in front of DeRozan for long enough that his defender, in this case Matthews, can get back to him.

Here is what happened on that play:

Matthews gets back quickly and forces the ball out of DeRozan’s hands. Eventually, the ball reaches Patrick Williams in the corner, whose drive is swallowed up at the rim by the Bucks’ size.

Matthews’s ability to avoid getting taken out by Vucevic’s screen is crucial. Lopez can sprint back to Vucevic, and the team can rotate from there.

So, if you’re the Bulls, how would you attack this? There is always some advantage to seize against any type of defense. In this case, Milwaukee is leaving Vucevic open for a few seconds, as Lopez stays in front of the ball-handler. The pick and pop to Vucevic is there every time:

Especially in Game 3, the Bulls went back to this well often. Vucevic is a good shooter. But he hasn’t been punishing the Bucks enough for them to stop playing this coverage. Lopez will always contest, and there will sometimes be help defenders ready to contest too. Milwaukee is happy to take the ball out of LaVine and DeRozan’s hands. As usual, they’re even happier to keep the ball out of the paint.

Giannis envelops the rim, erasing anybody that gets by the initial coverage:

The perimeter defenders allow the rim protectors to cover the paint. Holiday, Matthews, and Carter stick to their man off of screens, contesting pull-up jumpers and blowing up set plays. Matthews is an excellent DeRozan defender; his physicality and size matches up well with DeRozan, and he’s able to make it as difficult as possible for DeRozan to get off his shots.

Carter is a bulldog. He’s undersized, but his low center of gravity has caused a lot of problems for LaVine. Carter is great at sliding around screens and finding a way to stick to LaVine as he tries to dribble into his looks. His ball denial is second to none. Focus on Carter on this play:

As usual, Carter stays on LaVine’s back as he navigates into the lane, with Lopez in front. They force the pass, and Carter is alert enough to prevent the Bulls from resetting their offense, denying a pass back to LaVine.

What a find Carter was. After Brooklyn waived him during the season, the Bucks grabbed him and have played him in this series with George Hill injured. Carter has made enough threes to stay in the lineup. This level of defense on superstars will keep him around. He can’t be exploited on either end, and that’s how you stick around in the NBA playoffs.

Holiday, Matthews, and Carter play defense with the intention of denying perimeter shots and forcing DeRozan and LaVine to either give up the ball or drive into the chopper that is the Bucks’ rim protection. They force the stars left every time:

By forcing them one way, the Bucks make sure that everyone on the team knows where to help, and where the rotations will come. Part of defense is asserting your will on the offense. Milwaukee forces the Bulls to be predictable.

They also make sure that the stars are driving with their weak hand every time, toward the center. They direct the offense toward Giannis. LaVine and DeRozan have a tougher time rising into pull-up jumpers from their left hand.

This is what it means to have a defensive infrastructure. Everyone knows the plan.

Milwaukee’s defense isn’t flashy, or even all that aggressive. They are not forcing a whole lot of turnovers. But they play to their strengths, and focus in on the Bulls’ stars. It’s working.