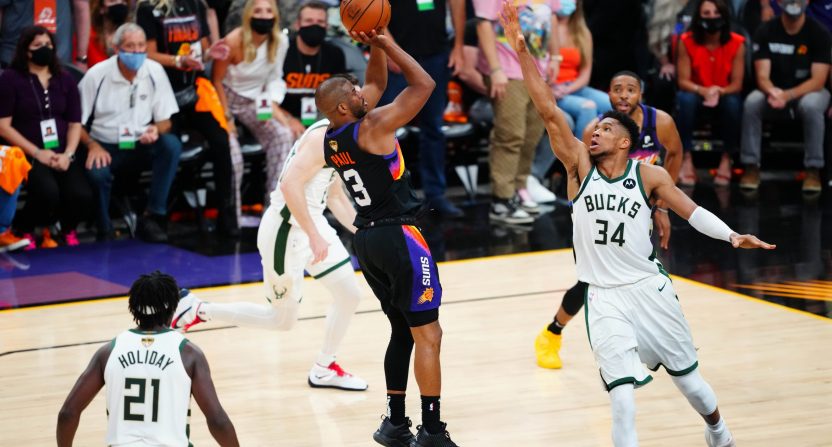 NBA veteran Chris Paul has bounced around the league these last few seasons, despite being one of the top players in his position. So there was a fear he could leave the Phoenix Suns after opting out of the last year of his deal with the team.

Paul was instrumental in the Suns’ run to the NBA Finals this year and they were just two games away from a Championship before things fell apart against the Milwaukee Bucks.

Fortunately for the Suns and head coach Monty Williams, the wily veteran ended up signing a four-year deal to the tune of $120 million with the team and will hope to go all the way next season. The Suns are among the favorites for the Championship next term, something you don’t see too often prior to the start of an NBA season. Fans in Phoenix can look to DraftKings Arizona for the best odds on the Suns’ prospects.

As for Paul, Williams admitted that re-signing Paul was top priority for the team but they also respected the fact that he had earned the right to play where he wanted.

“We didn’t want to lose him. That was always at the top of our minds. But we also respected the fact that he had earned the right to be a free agent, and anything could happen — even though, in my mind, I wouldn’t say I knew he was coming back, but I did feel like there was a level of comfort in our program,” the coach said in an extensive interview with The Athletic. “I think he and I have a level of trust that we both know is not always like that in other places. I certainly know it, you know? And I think there’s a level of — I think guys know that our culture and how we do things is a place where they can get better. I think that was helpful. At the same time (laughs), you don’t know, you’re just kind of hoping, like, ‘You’re coming back, right?’ (laughs). But I also respected the fact that he had earned the right to make a choice.”

Williams also revealed that there wasn’t much communication between Paul and himself, although they’re known to share a great bond. He noted that Devin Booker had a lot to do with Paul returning.

“No, we didn’t do that,” he said when asked whether there were elaborate presentations on Phoenix’s part. “He and James talked more than I did with him. I’m really close to all of our players, and the last thing I wanted to do was emotionally confuse them, if that makes sense. I just didn’t want to do that. (But) you know, he knows. I’m not stupid.

“I’ve been in the league for a long time. I haven’t coached as long as a head coach, but the years I have coached I’ve had the most success with Chris. I ain’t crazy (laughs). You know what I’m saying? Like, he and Book (Suns star Devin Booker) — those two are different. And Book had a lot to do with him coming back. I think Chris sees something in Book where he knows that that guy is going to be there every night. He’s not running. And I think that partnership is something that was attractive to him.”

Williams admitted he hasn’t done much studying of the new NBA landscape given some of the big trades to have gone down as he’s still processing his team’s fortunes and misfortunes last season. The Los Angeles Lakers are favorites to win the Western Conference after adding Russell Westbrook and other key players. The Suns were responsible for booting the Lakers out of the playoffs last season but that isn’t expected to be the case this time around. Williams says he isn’t worried, however.

“Yeah, I haven’t watched much lately because I’ve been trying to process what we’ve gone through. I need time to dive into our team, learn our new players. I’ve been meeting with the coaches, just talking about how to approach this year because this is an unknown with such a short rest,” he explained. “But the West is tough. But every year the West is tough. And you know, nobody picked us to be (in the Finals). Look where we were picked last year. Some people didn’t even have us making the playoffs, even with Chris.

“So that part doesn’t bother me at all, because you have to play the games and you have to go through the grind and you ain’t gonna win because somebody said you’re going to win. You’re going to win because you go out and win the game. That’s what we’ve been about proving. That doesn’t diminish teams in the West. I’m looking at teams that are hungry just like us who were on the outside, teams like Sac, you know. That’s a team that’s going to come after your head next year. Houston. I’m watching all the additions that they’ve made.”