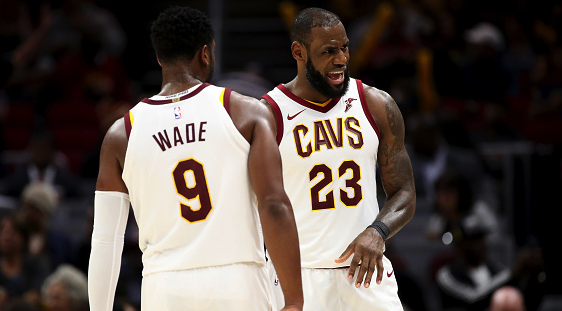 The new NBA season is finally here, and the first few nights of the national television schedule will provide the best matchups and players we’ve been dying to see all summer. July and August brought so much drama and intrigue off the court, and now we finally get to see it all play out for real.

Here are the top 10 national games to watch this month, in chronological order. All times are eastern.

Boston @ Cleveland, 8 p.m., TNT — This is the game we couldn’t wait to watch after Kyrie Irving forced a trade out of Cleveland and landed with Boston, the Cavs’ chief adversary in the Eastern Conference. Add Gordon Hayward, Dwyane Wade, Derrick Rose and Jae Crowder to the mix and you have what could be one of the most exciting openers we’ve seen in quite some time.

Houston @ Golden State, 10:30 p.m, TNT — Chris Paul could never get to a conference finals in his time with the Clippers, and now he’s joined forces with James Harden in Houston. Their chemistry in the backcourt will be tested immediately against the Warriors. The Paul and Harden versus Stephen Curry and Klay Thompson storyline will be on full display right away. Expect a high-scoring, high flying game between the West’s top two.

Philadelphia @ Washington, 7 p.m., ESPN — The much-hyped Sixers will have their first game on national TV. Joel Embiid is fresh off his contract extension and is expected to play 15-20 minutes on Wednesday. Philly will also have the last two top overall picks, Ben Simmons and Markelle Fultz, make their debuts, and the Sixers brought in vets J.J. Redick and Amir Johnson this season.

Washington didn’t make big offseason changes, so they’ve kind of been viewed as an afterthought in the national conversation. John Wall and Bradley Beal believe this is the year they unseat Cleveland out East, and this opener gives them a chance to flex their muscles a little.

New York @ Oklahoma City, 8 p.m., TNT — The fact that this game was scheduled even before the Knicks traded Carmelo Anthony to the Thunder is peak irony. Coming off his MVP season, Russell Westbrook plays his first regular season game with Anthony and Paul George, a trio that has vaulted OKC into the West’s top three.

The Knicks are going to have a really bad season led by Kristaps Porzingis and seem to be TNT’s preferred opening week foil to showcase an elite smaller-market team (New York has played Cleveland in the opening week in recent years).

Cleveland @ Milwaukee, 7 p.m., ESPN — Washington, Toronto and Milwaukee are all in that second tier in the East behind the Cavs and Celtics, and the Bucks get tested early with their first two games at Boston and at home here against Cleveland (Milwaukee plays Boston a second time later in the month).

It’ll be most of America’s first look at Giannis Antetokounmpo this season, as he grows as a player and tests the limits of what a point-center can accomplish on the court.

Toronto @ San Antonio, 8:30 p.m., NBATV — These are the two forgotten teams from their respective conferences, mainly because the changes they made over the summer weren’t substantial. Kawhi Leonard won’t be ready for the season opener with a quad injury, so the Spurs might even start slow to begin the season. Either way, it’ll be an interesting inter-conference litmus test for both teams as the opening week concludes.

One interesting matchup to watch here will be Toronto’s Serge Ibaka and San Antonio’s LaMarcus Aldridge, who each got lucrative contract extensions.

New Orleans @ Portland, 10 p.m., NBATV — Anthony Davis and DeMarcus Cousins begin their first season together with tremendous pressure on the Pelicans to make the playoffs this season, which won’t be easy given the tremendous depth the West has.

Damian Lillard, C.J. McCollum and the Blazers barely made the playoffs as a 41-41 8th seed and will have little margin for error this season as they’re showcased here in this battle of big and small All-Stars.

Washington @ L.A. Lakers, 10:30 p.m., ESPN — Every big game the Lakers play this season against a team with an elite point guard will be marketed around rookie Lonzo Ball. L.A.’s first game against a truly elite PG is on this night against John Wall and the Wizards. Expect the league to market Ball hard, and ESPN’s first national game with Lonzo will be hyped to the max.

Oklahoma City @ Minnesota, 8 p.m., NBATV — The top two teams in the Northwest Division meet for the second time in a week, and the matchups will be glorious. Karl-Anthony Towns inside against Steven Adams. Jimmy Butler going against Paul George like they did in their Chicago-Indiana days. Carmelo Anthony against a potential future Melo in Andrew Wiggins, fresh off his max extension. Should be a fun one if you’re home that Friday night.

Golden State @ L.A. Clippers, 10:30 p.m., NBATV — It’s going to be weird seeing the Warriors-Clippers rivalry without Chris Paul in it, but a new chapter will begin with Patrick Beverley and Milos Teodosic at point guard for Los Angeles and a team fully built around Blake Griffin. Hopefully, things will just be heated and intense as they were in years past.