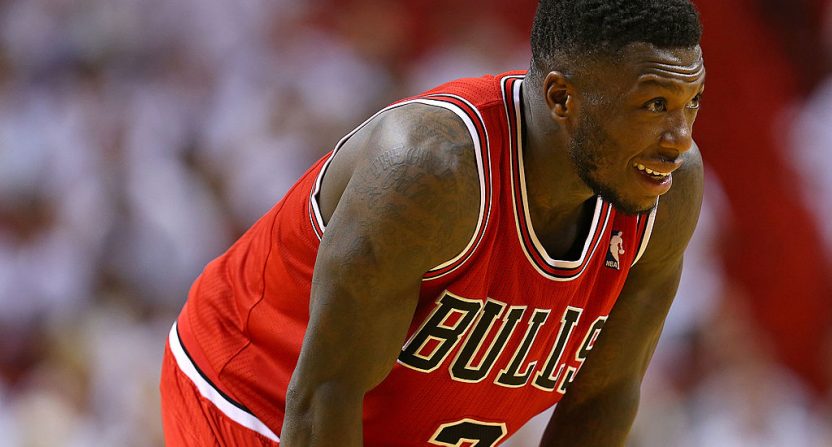 If it were up to Nate Robinson, he’d be playing in the NBA Playoffs. The NBA veteran played in Venezuela this season, but after hearing the news that Bulls point guard Rajon Rondo is out indefinitely with a broken thumb, he called for Chicago pick him up as a replacement.

#freenaterob⛹? chitown y'all know what I bring to the table #holdat

Robinson played for the Bulls in the 2012-13 season, helping them to the No. 5 seed in the East. Although the Bulls were knocked out in the second round by the LeBron James and the Heat in five games, Robinson turned in a memorable performance in Game 1, Chicago’s only win of the series, with 27 points and 9 assists. He also had an epic 34-point outing against the Nets in a triple-overtime game during the first round of those playoffs.

Overall, that year in Chicago was arguably the best year of Robinson’s career, as he averaged 13.1 points and 4.4 assists.

The Bulls are likely going to miss Rondo; going against the team with which he won an NBA title, Rondo fell one rebound shy of a triple-double and also had five steals as the Bulls won easily in Game 2.

For what it’s worth (which probably isn’t much), Robinson was one of Guaros de Lara’s top scorers in his short stint in Venezuela at nearly 15 points per game. He also averaged 12.2 points in 17 games for the D-League’s Delaware 87ers.

Two weeks ago, Robinson told For The Win’s Nina Mandell he thinks he could still contribute to a playoff team:

“Playoff teams, that could use me right now: The Chicago Bulls for sure, I’m going to say them first because that was one of my favorite places to play,” he said. “I was just disappointed they didn’t give me a contract that they should have after I helped them get to the playoffs and done everything that I did.”

…maybe it wouldn’t be such a bad idea to add him to the roster.

In all likelihood, Robinson is not the answer for the Bulls in the wake of Rondo’s injury. But just imagine how great a playoff battle between 5’9″ guards Nate Robinson and Isiah Thomas could be.