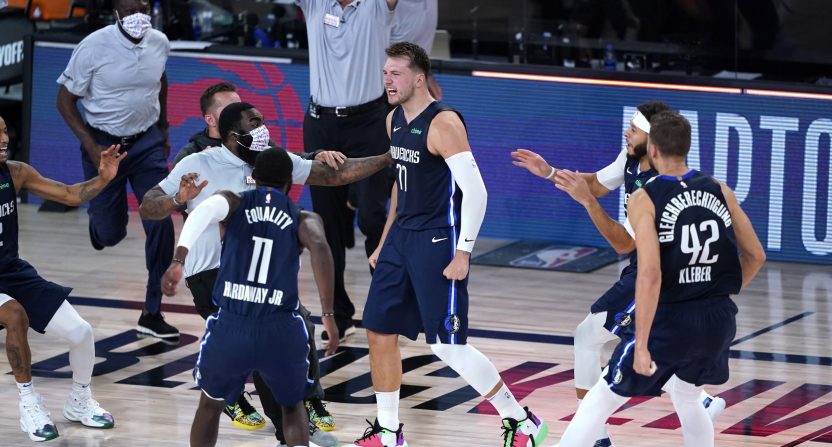 So today, no matter how unrealistic, let’s talk about why every NBA team could win the championship. I’ll order them in rough tiers of championship contention, from the best (most realistic!) to the worst, where the championship is the draft lottery.

They’re the best team, with the best player (LeBron James) and the biggest matchup nightmare (Anthony Davis). They’ll skirt through the regular season with auxiliary players who should stay afloat without LeBron, and then pick it up in the playoffs.

I think the Clips are being slept on entering this season. They got better in the offseason. Their hopes come down to avoiding debilitating Achilles heels (aka Montrezl Harrell) and getting the best playoff version of Paul George. If they win it all, no one should be surprised.

With Jrue Holiday as the third star, the Bucks are the best team in the East. Giannis Antetokounmpo is here for the long haul. I’m not sure I love the depth, with a cast of specialty players who can either shoot (Bryn Forbes, DJ Augustin) or defend (Pat Connaughton, Torrey Craig), but not both. Regardless, Giannis will figure out the playoffs at some point, and the Bucks absolutely have enough to win it all.

Tier 2: Finals are a possibility

If we get the bubble version of Jamal Murray again, in addition to the expected growth from Michael Porter Jr., the Nuggets are a legitimate threat. Will Barton can erase the negative impact of Jerami Grant’s departure.

They made it last year, and they’re built to sustain. Any team in the Eastern Conference will have trouble beating this Heat team in a seven-game series.

I’m high on the Sixers. A functional supporting cast surrounds Ben Simmons and Joel Embiid now. They have defense and shooting, and if Embiid goes hard throughout the regular season, he can win Defensive Player of the Year — with Simmons not far behind. A James Harden trade has the potential to vault them higher.

The Nets have depth, a pair of elite players, and starting-level talent that could make them dominant if everything comes together. Surrounding Kevin Durant — who looks healthy and explosive — and Kyrie Irving with Joe Harris, Spencer Dinwiddie, Caris LeVert, and Jarrett Allen has the potential to be scary, at least on paper.

The Celtics’ path to a championship is Jayson Tatum going supernova. With a healthy (at some point) Kemba Walker, Boston could go all the way if Tatum reaches another level.

Once Kristaps Porzingis is fully healthy (no guarantee), the Mavs can hang with anyone in the league offensively. Add in some improved defense — with Josh Richardson replacing Seth Curry — and the various ways in which the Mavs can improve their team throughout the season, and you have a team that can ride its MVP candidate deep into the postseason. Luka Doncic can do it.

They downgraded at center, but the Raptors have everything needed to show up in the upper tier of the conference again. Toronto took the Celtics to seven despite Pascal Siakam struggling. If Siakam plays like a legitimate superstar for the entire season, the Raptors will be in it.

Donovan Mitchell was outstanding in the playoffs — like Murray, the Jazz are scary if Mitchell keeps this up. Rudy Gobert — fresh off a monster new contract — will probably be in the top three of the DPOY race again. The return of Bojan Bogdanovic and the continued acclimation of Mike Conley means the Jazz can’t be overlooked.

They got a lot better in the offseason, and will enjoy the full return to regular season basketball of Jusuf Nurkic, Zach Collins, and Rodney Hood. Damian Lillard can dominate anyone and carry the Blazers far.

The Pacers barely made any changes in the offseason, so they enter with impressive continuity and chemistry. Victor Oladipo could morph into a superstar again and push them deep, with a well-rounded supporting cast. It would take bubble T.J. Warren, and big seasons from Malcolm Brogdon and Domantas Sabonis.

A Devin Booker-Chris Paul-DeAndre Ayton big three? Why not! They have good players around them, too. It will have to be a true big three if the Suns are going to be legitimate contenders.

Tier 5: Hanging around the play-in round

They’re going to sink when Stephen Curry is on the bench, but Curry is a winning player, and he still has Draymond Green. Never completely count out Steph and Steve Kerr.

It’s unlikely that Harden lasts the season in Houston. But suppose he actually likes playing with John Wall and decides to play it out. Houston has a new young center in Christian Wood with a star leap hidden in there somewhere. We know that Harden can go far with a secondary star guard and shooting.

I’m optimistic about Trae Young. The Hawks made a lot of upgrades, and now have strengths in every area of the roster. Imagine if some young guys get good and the new guys (Bogdan Bogdanovic and Danilo Gallinari, especially) fit seamlessly with an All-NBA-level Young. Good things could happen in Atlanta.

Spare the laughter about Russell Westbrook going deep in the playoffs; any team with two All-NBA players is something of a threat. Big improvements from Rui Hachimura and another promising young-ish guy (Isaac Bonga? Thomas Bryant?) could give Westbrook and Bradley Beal a legit supporting cast.

Evan Fournier is coming off a career year, and a lot of players in Orlando have quietly improved over the past couple of years, including Markelle Fultz and Michael Carter-Williams. No Jonathan Isaac this year, but maybe Aaron Gordon finally becomes Kawhi Leonard after all.

They nearly made the playoffs with a super young team last year. Ja Morant could make a Luka-like second year leap, and the other young guys could grow proportionally — maybe Jaren Jackson Jr. stops fouling, and Brandon Clarke expands his offensive game even more. They have nice pieces around those top guys.

A full season from Zion Williamson paired with another All-Star campaign from Brandon Ingram could mean big things for this Pels team. There’s a scenario in which they end up 11th in the West, but they also have a legitimately high immediate ceiling.

Gregg Popovich has two players who could still be considered stars (DeMar DeRozan and LaMarcus Aldridge) and a cast of young guys waiting to break out. The Spurs are always around. A barrage of threes from Aldridge coupled with some growth out of Dejounte Murray or Lonnie Walker IV could push San Antonio above their current (low) expectations.

Karl-Anthony Towns, D’Angelo Russell, and Anthony Edwards could put up some points. You don’t need to defend to win the championship, right?

If De’Aaron Fox improves as a creator in the half-court, and Marvin Bagley III settles as the Kings’ second-best player (a lot to ask, to be fair), Sacramento could make a playoff push. They have nice veteran talent in Harrison Barnes and Richaun Holmes.

Tier 7: The bottom-half of the Eastern Conference is bad

A healthy Blake Griffin can legitimately carry the Pistons, regardless of who he has to play with. If the NBA suddenly outlaws threes, Detroit will have plenty of big guys to overwhelm people.

Maybe the Bulls will have a season-long new coach bump with Jim Boylen gone. If not, they’ll need the stagnating young guys around Zach LaVine (Lauri Markkanen, Wendell Carter Jr.) to get a lot better fast. There’s also Coby White, a score-first point guard that grew throughout his rookie year.

LaMelo Ball looks like a stud already. The Hornets don’t have a ton, but they’re well-coached, they spent (too much) money on Gordon Hayward, and they have scoring in Devonte’ Graham.

Tier 8: The bottom of the league

Sam Presti’s treasure chest of draft picks could all come to life right now and surround Shai Gilgeous-Alexander with elite talent. Or Lu Dort averages 30, playing every game like it’s Game 7 against Houston. Those two things have about an equal chance of happening.

Every young guy makes a big leap at the same time. That’s pretty much the championship scenario for a lot of teams, but it’s all the Cavs have. Collin Sexton looks like an answer, though. (Also, with their big men, they can compete with Detroit if the three-point shot goes away for some reason.)

Maybe they suddenly get all those star players they’ve been going for. That, or RJ Barrett embraces the ridiculous circumstances the Knicks have given him and becomes one of the league’s best players. You never know!