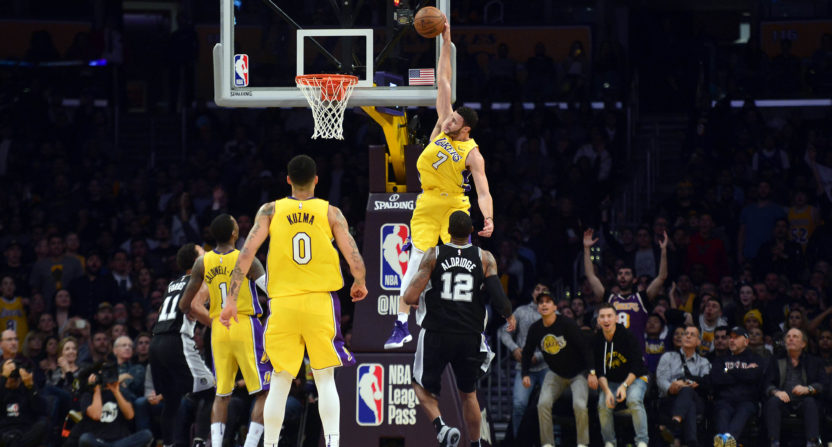 The 2018 NBA All-Star Game is Sunday night in Los Angeles, but the events on Saturday night at Staples Center could turn out to be the most entertaining part of All-Star Weekend.

Using the odds provided by Bovada, let’s make some predictions on the winners and sleepers of each competition.

Williams is the favorite in what is a pretty up-for-grabs competition. The Skills Challenge used to greatly favor guards; it’s a competition meant to showcase dribbling, passing, and shooting skills. But the format changed over the last few years, guaranteeing that a “Big” got to the final round to face a guard. And sure enough, the last two years were one by “Bigs” (Karl-Anthony Towns in 2016 and Kristaps Porzingis in 2017).

Additionally, many of these guys are just half-assing an exhibition contest, so their actual skills may not really make a difference. But Williams — in theory — has the best skillset to succeed in this competition, and he may be motivated enough to take it seriously, seeing as how he was an All-Star snub and will be performing in front of the hometown crowd.

The Chicago Bulls’ highly impressive rookie has the second-lowest odds in this competition, which is a bit puzzling. Of the four “Bigs,” he has the best shot and is the smoothest athlete (he’s a very capable ball-handler as well). He would’ve actually made plenty of sense being in the three-point contest (he attempts over six per game and shoots 35.4%) with his effortless stroke and smooth release from downtown. And the player he’s most compared to is Kristaps Porzingis, the winner of last year’s Skills Challenge.

Thompson is the favorite as he should be, but it’s a bit surprising how far ahead he is ahead of the next guy, defending three-point contest champion Eric Gordon (+450). I’d rather take Gordon’s odds than Thompson’s, but would view Thompson as the slight favorite.

As you can see in the video above, Thompson won the three-point contest in 2016. And this will be his fourth time in the contest, which is the most among this year’s participants. Oh, and he leads the NBA in three-point percentage at 45.4, which is an insanely efficient percentage when you consider that he attempts 7.1 threes per game.

As a rhythm shooter and with maybe the smoothest stroke in the league, Beal is a pretty enticing bet for the three-point contest at +650. He participated in the contest in 2014, and finished as the runner-up. That was while he was — at the time — the youngest participant in the history of the three-point contest, and didn’t quite understand the rules.

This time, he’s aware of the rules and sounds motivated to win:

“I think the overtime buzzed me because I thought it was only 30 seconds,” Beal, who finished second to Belinelli, recalled this week. “I got kind of winded. I didn’t know I’d have to go the whole full round again. That was my fault on that. I’m more knowledgeable of the rules now.”

“Well, I want to win,” Beal said. “I think the first time around I wanted to win but it was more like getting the experience and feel for it. I feel like it’s getting more competitive and more competitive every year with some of the best shooters in the game.”

Just a few examples of the kind of dunks he seems to do regularly:

Nance is the only non-guard in this year’s contest, and people certainly love seeing guards show off crazy bounce. It’s not a surprise that rookie high-flying guards Dennis Smith Jr. and Donovan Mitchell are the favorites according to Bovada. But I really like Nance’s chances to put on an amazing show, and the former Laker will have a lot of support in the building after playing his home games at Staples Center over the last two seasons (he was traded to the Cavs last week).

This could’ve just been Nance of course, but we’ll add the only guy with worse odds to the conversation. And it’s actually the only one of this year’s participants who’s been in the dunk contest before; Oladipo was the runner-up to Zach LaVine in the 2015 contest.

This season, everything seems to be going right for Oladipo. The Indiana Pacers’ guard has put together a fantastic season that resulted in his first All-Star appearance, and now he has a chance to be *the* star of All-Star Weekend.