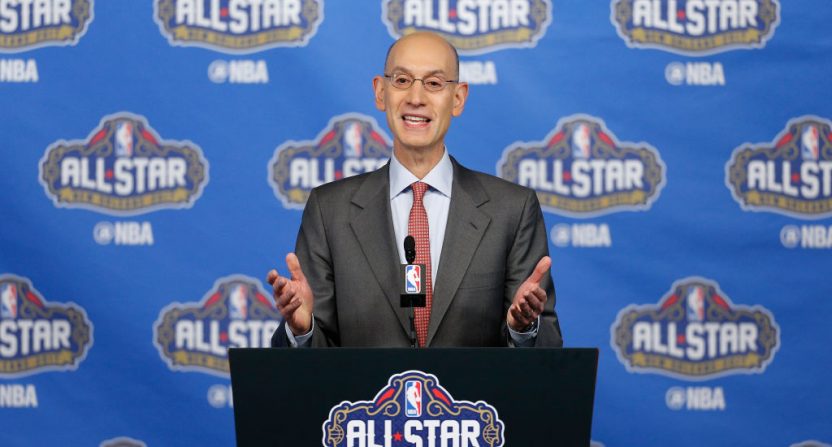 One of the most entertaining parts of the NBA season is the annual All-Star game, which has been decided by two captains that draft their teams weeks before the game. That format is changing in a way that may make the festivities even more interesting for fans.

The NBA released a statement on Tuesday that detailed that the draft will now happen ahead of the NBA All-Star Game on Feb. 19 in a live pregame segment on TNT.

For the first time, the NBA All-Star Draft will take place right before the game. The two team captains will draft the team rosters from the pool of players voted as starters and reserves in each conference.

It has still not been determined who the captains will be at this point, but Los Angeles Lakers star LeBron James and Milwaukee Bucks forward Giannis Antetokounmpo are currently leading their respective conference in the third returns of All-Star game voting.

LeBron James and Giannis Antetokounmpo lead their respective conferences in the third fan returns of #NBAAllStar Voting presented by AT&T.

Fans account for 50% of the vote to decide All-Star starters. NBA players and a media panel account for 25% each. pic.twitter.com/nqNZqkeVJw

This change is certainly interesting considering the captains will need to draft their teammates just hours before playing together on the court.

It seems like the NBA world is in favor of this change, making it feel like much more of a pickup basketball game which fans can relate to.

About time. Make the players walk over to each team like a real pickup game https://t.co/4U2Qkknj2W

This is such a good touch that really taps into the pick-up game aspect.

It also opens the door to some potential messiness lol https://t.co/JKxdu8VqC6

This is a super fun change. Love it. https://t.co/rcxWHAImYL

Everyone needs to be in the room. This needs to be done playground style. Let's see who takes this personally. https://t.co/tcjM93jbzE

It will ultimately depend on how TNT goes about putting together this segment, but the idea of captains drafting their teams just ahead of playing on the court is creative and could be extremely entertaining.

This year’s All-Star weekend is taking place in Salt Lake City this year, which will include the yearly Slam Dunk Contest, 3-Point Contest, and Skills Challenge on Feb. 18.