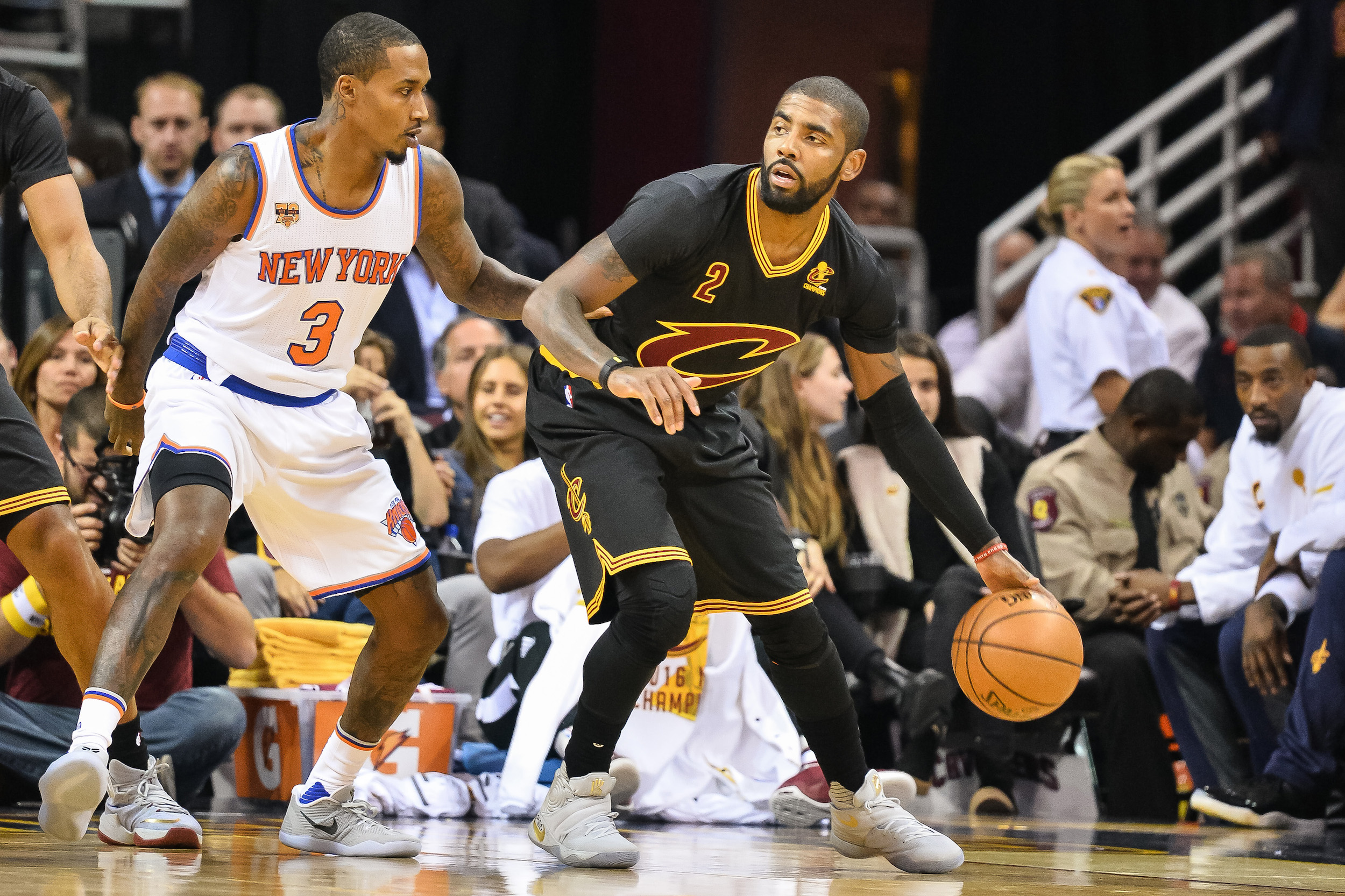 Two weeks into the NBA season, it’s the perfect time to take a look at some early league trends.

It’s also a good time to catch up as there’s a good chance you’ve been distracted over the past few days. Perhaps you’re not as plugged into the happenings in the NBA as you’d like considering what else has been happening around the nation.

So let’s put the microscope over seven early season developments to fill you in on why they matter moving forward.

The defending champs have won six of seven games and lead the league in points per 100 possessions (110.6). Remember all that pressure that was constantly buzzing below the surface over the past two years for this team? That no longer exists. The Cavaliers look fluid, happy, and relaxed. The players are all in sync. It may have also helped that this was their first training camp under head coach Tyronn Lue.

None of that should come as a surprise, but there should now be zero doubts about Cleveland’s ability to run away with the East.

A trend worth nothing: LeBron James has relinquished much of the offense to Kyrie Irving. Irving has the highest usage rate on the team and is also leading the group in scoring. That bodes well for James’ energy come playoff time.

The Pelicans stink. They’re winless in eight tries. They’re scoring an anemic 96.5 points per 100 possessions, the third-lowest mark in the NBA. They’re trotting out a starting lineup featuring Solomon Hill and E’Twaun Moore. The most criminal aspect of all this is how they’re wasting Anthony Davis’ prime.

Davis is still a stud. He’s averaged 30.9 points, 11.5 rebounds three blocks and two steals. He’s shooting 51 percent from the field. This is a good time to remember he’s just 23 years old. And yet the Pelicans are still 0-8. You actually have to give GM Dell Demps some props. It’s HARD to have a guy like Davis on your roster and still put together such a pitiful team.

The good news for New Orleans is that Davis is signed through 2021. The bad news is that it’s hard to image Davis being cool with sticking around if this goes on much longer.

Kemba Walker is an All-Star

He broke out last year, but this year Walker has been lights out so far. 23.9 points on 47 percent shooting. 44 percent shooting from deep. 5.9 assists, and leading a Hornets team third in the NBA in defensive rating. He’s a big part of the reason Charlotte is off to a 6-1 start, their best start in franchise history.

The Clippers look like a threat in the West

Doc Rivers’ crew is off to a scorching 7-1 start. They have the league’s top defensive rating. But you already knew the Clippers were good, the question is whether they finally have the depth and firepower to advance deep into the playoffs. They’re starting lineup of Chris Paul, JJ Redick, Luc Mbah a Moute, Blake Griffin, and DeAndre Jordan has outscored opponents by a blistering 27.1 points per 100 possessions in 148 minutes of floor time (according to NBA.com).

And all that is great. But here’s the biggest difference between this season and years’ past and why this could be the year for the Clippers: They actually have a bench.

L.A.’s second-best lineup has actually been an all-bench grouping of Raymond Felton, Austin Rivers, Wesley Johnson, Jamal Crawford and Marreese Speights. Speights gives Rivers another player who can carry an offense for a small stretch. He helps take some of the pressure off of Jamal Crawford.

The Clippers’ starting lineup is as talented as any in the league. If this bench mob can continues to be effective this team should be able to give the Warriors a strong run.

The Celtics have a defense problem

It’s not time to panic yet, but Boston is surrendering a league-worst 112.3 points per 100 possessions this season after allowing just 100.9 last year. The Celtics’ pick-and-roll defense has been atrocious. They’ve had a lot of injuries and their 3-4 start isn’t catastrophic, but it’s an interesting trend worth monitoring. 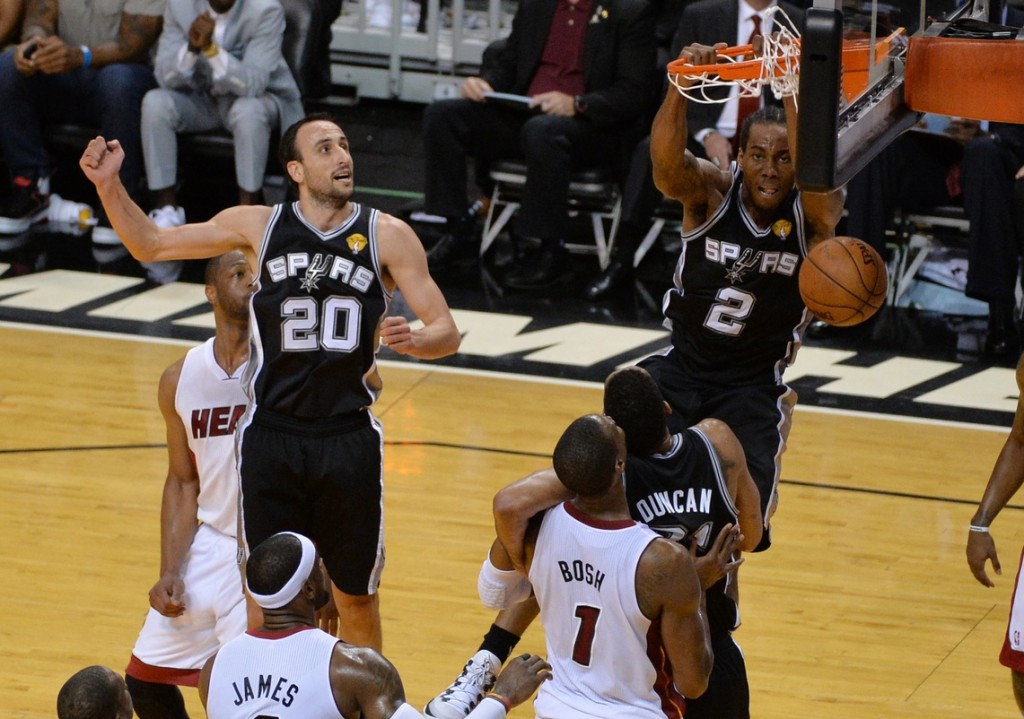 We already knew that Kawhi was one of the NBA’s top defenders. This year’s he’s morphed into an offensive beast, too. He’s averaging 27.4 points per game on 47 percent shooting. He’s also routinely hitting shot like this:

Kawhi Leonard from wayyyy down town

Duncan may be gone but the Spurs still live because of Kawhi. And if you think that Stephen Curry and Kevin Durant are going to steal MVP votes from one another, that leaves you with three possibilities for the award: Russell Westbrook, LeBron James and Kawhi Leonard.

No reason Kawhi can’t wind up on top.

As for the Spurs, they still appear to be a bit outmanned but they are strong in the one area where the Warriors are weak: Size. In Leonard, LaMarcus Aldridge and Pau Gasol, San Antonio has three players who can bully smaller opponents down in the paint. Those are match-ups that could give Golden State fits over a seven-game series.

DeMar is averaging a ridiculous 34.1 points per game and is the first player to a start a season with five straight 30-point games since Michael Jordan in 1988. That’s nice and all but check out how he’s doing it. 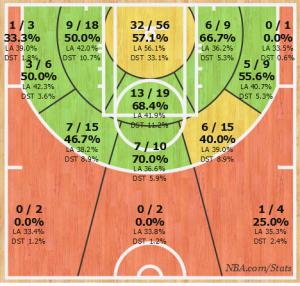 Who says long two-pointers no longer have a place in the game? It turns out taking the shots defenses want you to take can be an effective strategy after all.