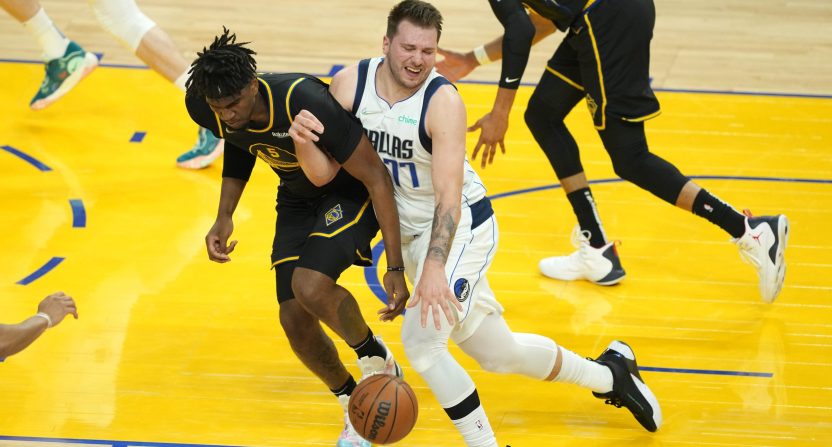 The Golden State Warriors routed the Dallas Mavericks in Game 1 of the Western Conference Finals, winning 112-87. But while the decisive final score is notable, the play of Dallas star Luka Dončić was particularly eye-opening.

Entering the series, there were genuine questions about how Golden State would guard Dončić. Prior to the game on Wednesday, a photo circulated of Luka drinking a beer. And while it was actually taken the day before, NBA fans still thought that the beer to Luka would be akin to spinach for Popeye. That was not the case.

If you’re cheering for the Warriors to beat the Mavericks, you liked what you saw in Game 1.

Luka Doncic in the loss:

He had the same amount of turnovers tonight as he did in game 5, 6, and 7 combined. pic.twitter.com/EXMQbpgpin

The Warriors held Luka to 16.7% on contested field-goal attempts 🔒

Dončić was also only 3-of-10 on three-pointers and 5-for-8 on free throw attempts.

Golden State’s defensive effort was praised by their coach, Steve Kerr, as well as basketball fans watching the game.

“I thought Wiggs was fantastic… He did a fantastic job. Wiggs is just a huge part of our defense and our team.”

It's been a nice defensive night from Andrew Wiggins. Here's a two-possession sequence during that third quarter run.

1. Spin/recovery to alter a Luka Doncic layup before he can score over Jordan Poole.

2. Picks Doncic up full court, drapes him into the lane, gets a tip steal pic.twitter.com/Jl63U4HQGb

People are so mad the Warriors contained Luka and it doesn’t fit their narratives.

This isn’t the Phoenix Suns. You’re no longer playing that team. This is championship level basketball. pic.twitter.com/uas0lPd8at

Of course, there is something to remember. This is one game. Dončić had a poor effort in Game 2 against the Phoenix Suns as his Mavericks fell down 2-0. That series ended up just fine for Dallas. That may or may not happen again here but it’s unlikely that Luka will continue to struggle so mightily.

Luka was -30 with 7 turnovers. Guessing that won't happen again.

You know Luka will be a monster in Game 2

As bad as Game 1 was for Luka and the Mavericks, it’s just one game. And Dallas has been down this road before in the postseason, losing Game 1 in the second round to Phoenix and the first round to the Utah Jazz. If Luka can find his form again, we may look at this game as a simple bump in the road.

But the Mavericks will need Dončić’s best effort. If Game 1 isn’t simply a blip, this series can be simultaneously very long and very short for them.