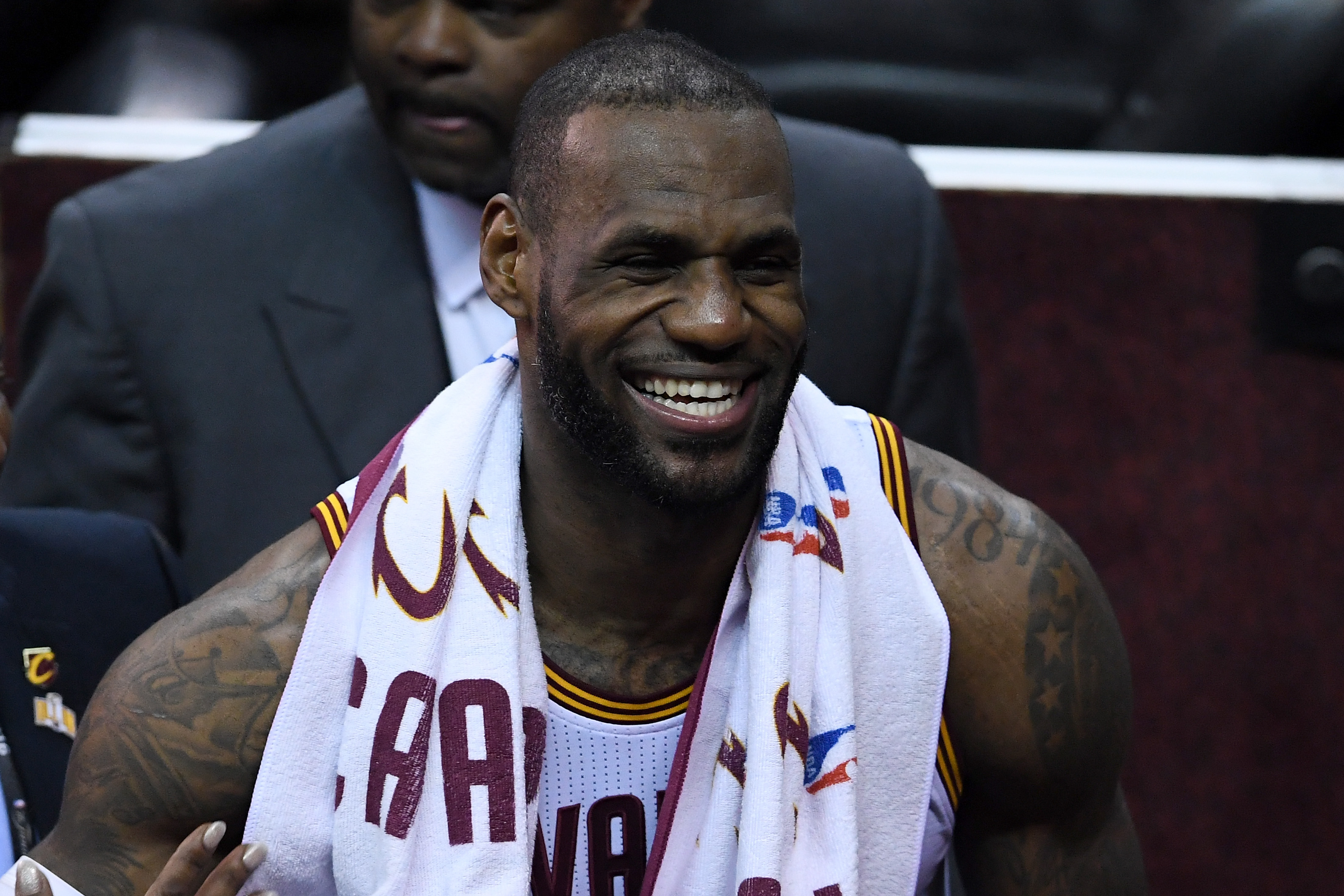 With apologies to the poor guy in the first few rows at Quicken Loans Arena who found himself struck with a gross, wet, completely unexpected projectile, there was something strangely cathartic about watching Steph Curry fling his mouthpiece into the seats in anger during Thursday night’s Game 6.

(That’s easy for me to say, of course, taking in such epiphanies from the comfort of home, where keeping my head on a swivel in fear of flying orthodontia is thankfully not a concern.)

But even as someone who has adored this Warriors team, there was a strange delight in watching the league’s two-time MVP come unglued for the briefest of moments. Ultimately, that’s all it was, a moment. Within literally seconds, Steph was on the sidelines, apologizing to the fan who found himself on the receiving end of one of the weirdest souvenirs imaginable. With an assist from the calming embrace of Shaun Livingston, all it took was an instant for Curry to return to the genial, unflappable, eminently admirable presence that we have always known him to be.

Yet for just an instant, when the whistle blew for the admittedly borderline foul call that finished his night, the palpable frustration, the uncontrolled anger, the sense that the league’s most confident player had joined his most competent team in a full-on meltdown, it confirmed that greatest of truisms.

Nobody knows much of anything.

Steph Curry’s temporary fit of dental rage is hardly the lone example, of course. In the early stages of these Finals, Kyrie Irving was a frustrating liability squeezing all the efficiency out of the Cavaliers offense, Tyronn Lue was an overmatched novice with no real plan to attack Golden State, and LeBron James was, well, still a great player, no doubt, but one with a deteriorating jumper, a bit more wear and tear, and no real chance of replicating the team-carrying, myth-building, all things to all people effort that he put together way back in last year’s Finals.

We thought, as recently as a week ago, that King James was once again doomed, that one of the greatest players we’ve ever seen was simply outflanked by one of the greatest teams. We thought that windows were closing, legacies were compromised, and changes were coming. I say “we” because indeed, I fall into these same traps, much as I might like to think I’m wise enough to know better.

Eventually, what we should come to realize is that “knowing better” means not really knowing anything. Not definitively. Not authoritatively. Not with any degree of certainty. When you’re dealing with something as inherently random, fluid and wild as what we saw Thursday night, we should know damn well by now that the only truly correct answer is to throw our hands up and do our best impression of a shrug emoticon. Sure, we can read tendencies. We can calculate probabilities. We can venture the most informed of guesses. But anyone who knows what comes next is wrong, and anyone who knows why is something even worse: a charlatan.

Not that this stops anyone from continuing to make the same mistakes. Steph Curry has been exposed by the biggest stage. The Cavaliers are back because the Warriors celebrated prematurely. And if LeBron James can reach this higher plane of excellence, then why doesn’t he just go there more often? All of these new narratives are just as specious and thin as the ones they replaced, and perhaps what’s most infuriating isn’t just how overly simplistic they are, but how utterly unnecessary.

Because my goodness, have you seen all the sublime delights that this series has to offer? The Golden State Warriors, this boundary breaking, aesthetically brilliant, widely beloved team, is suddenly whining, flopping, and low-blowing their way through the playoffs. They have been tested, likely more than they anticipated, and in their battle to survive, they have been transformed from white knights to black hats in a fashion that any pro wrestler who aspires to a heel turn would probably do well to study.

Central to that story, of course, has been Draymond Green, a man who embodies the game’s complexities, its contradictions, as well as anyone. He is a player whose unique skill-set has quite literally changed the game, his “undersized” label transformed from liability to virtue, by way of the Death Lineup, but also through his work and training, and the gigantic chip on his shoulder that he makes no effort to hide.

But that same attitude likely has plenty to do with the trash-talk, the posturing, the rather ridiculous inability to maintain any control whatsoever over his flailing limbs. This is the Draymond package, the hard-nosed dedication and the anti-social oversteps, and there’s simply no way to pick and choose.

On the other side, there is LeBron James, somehow simultaneously occupying an undeniable place in the pantheon as one of the greatest athletes that ever lived, while also continuing to fill his appointed role as the man perpetually in search of something, the player for whom enough is never enough. For the longest time, a championship was his most essential goal, then multiples. Upon returning to Cleveland, raising a banner for his hometown team became his latest Everest, and now, by God, he’s as close as he’s ever been.

For the first time in his career, “The Chosen One” can, in a single game, finally accomplish what we’ve all asked of him, what he’s asked of himself, from basically the moment he arrived in the league a decade ago. It’s not just up to him, of course, but you’d be forgiven for thinking so, after witnessing his last few outings. Because it’s not simply the feats of physical prowess that continue to amaze, but the palpable sense that LeBron is in charge of it all, that he is floating above the game, all of the games, anticipating each move as only the greatest of prodigies can.

There are so very many more stories, of course, those fascinating threads of human drama that transform this from competitive exercise into so much more. There is Kyrie Irving, reminding the world that hero-ball works just fine as long as your play is heroic. There is Harrison Barnes, falling flat right as he approaches one of the biggest opportunities of his career. There is Kevin Love, ever the third wheel, unable to fully fit in (or fit out), despite his obvious ability.

This series has provided everything, (save perhaps a more competitive fourth quarter) and so we’re left to wonder, why in the world do we find it so necessary to dissect it, to explain it, to fit it into one of our tidy little boxes? Isn’t it far more satisfying to gaze at the madness, concede that we have no idea what’s happening, and realize that’s a feature, not a bug?

Hey @ayeshacurry here’s the tweet you deleted just in case you wanted to see it pic.twitter.com/ig9MFGsh08

Not long after Steph Curry’s mouthguard ascended to new heights of viral fame, his wife Ayesha fell prey, as so many of us do, to the temptations of 140 characters.

For a brief moment, on Thursday night, before Ayesha, and her tweet, were sucked into the next day’s spin cycle, and subjected to all the usual overreaction, point-missing, and not-so-thinly-veiled sexism, before any of that horrifying #takepocalypse could unfold, Curry’s tweet was just… funny.

In fact, it was damn hilarious, and sort of endearing, when you looked at it a certain way. Here was Ayesha Curry, a chef, a wife, a mother, a celebrity in her own right, temporarily losing her cool, just as her husband did, and lashing out with the sort of Donaghy-esque conspiracy theories that have become a staple of aggrieved basketball twitter. Celebrities! They’re just like us! They too, believe that NBA officiating is actually controlled by a secret cabal, pulling strings behind closed doors in the name of money… or ratings. I’m not sure which.

Eventually, Ayesha Curry came to regret breaking that most important of rules, and deleted the tweet, replacing it soon thereafter with an explanation of sorts, one of a much more serious nature.

Police racial profiled my father and told him to remove credentials and tried to arrest him. It's been a long night for me. I apologize:

Indeed, as reported by ESPN’s Marc Spears, Curry’s father was apparently mistaken, prior to the game, for David Aminzadeh, a man that NBA security was “on high alert” for given previous efforts to sneak into major sporting events. But even before those details, shared by Steph Curry after the game, became clear, Ayesha’s tweet quickly changed the tone of the conversation. After all, matters of misidentification, racial profiling, the trauma of a possible false arrest, these are real problems, the real world intruding into the silly little games that we treat with absurd levels of importance.

LeBron’s “legacy”? The Warriors’ “villainy”? Ayesha Curry’s transformation into the NBA’s Fox Mulder? It’s all just make-believe, the wonderful funhouse of storylines and implications that we build because we need an escape. Sunday will offer as much plot, as much spectacle, as much intrigue, as just about any game in the league’s history. Drink it all in.

Just please, try not to take it too seriously.