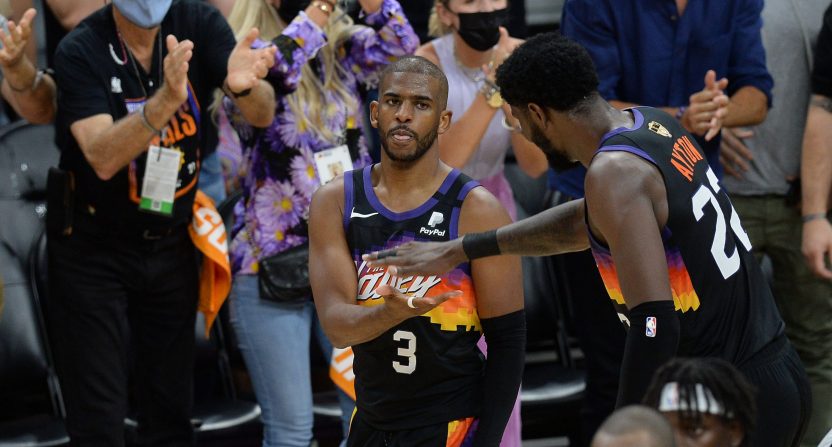 The Phoenix Suns took down the Milwaukee Bucks 118-105 in Game 1 of the 2021 NBA Finals on Tuesday night. Here are our main takeaways from the Suns’ victory:

Chris Paul is fantastic in his Finals debut

Paul was particularly fantastic in the third quarter, scoring 16 points and leading the Suns into the fourth quarter with a 16-point lead.

Deandre Ayton is making the leap

The University of Arizona product is showing in the postseason why he was the No. 1 overall pick of the 2018 NBA Draft. Following a Western Conference Finals series in which he averaged 17.8 points and 13.7 rebounds, Ayton scored 22 points — 8-of-8 from the field, 6-of-6 from the line with 19 rebounds in Game 1.

Paul and Ayton make for a lethal pick-and-roll duo that the Bucks will have a lot of trouble stopping in this series. Ayton really is the wild card that elevates the Suns to another level when he’s on his game, and that’s certainly been the case of late.

Suns cash in at the free-throw line

Phoenix didn’t miss a free throw until the game’s final seconds. The Suns went 25-of-26 (96.2%) at the line, compared to 9-of-16 for the Bucks. Phoenix is shooting 87.0% from the charity stripe in these playoffs, good for the best free-throw percentage in NBA playoff history.

The Suns are shooting 87.0% on free throws, the highest mark by a team in NBA playoff history (min 10 games).

The Suns also took care of the ball and had nine steals, leading to a +4 turnover margin for Phoenix (nine turnovers compared to 13 for the Bucks).

Executing with the fundamentals can go a long way to gaining an advantage in what otherwise may be a pretty even matchup, and that’s where the efficiency and smarts of Paul are so meaningful.

As for Milwaukee, Giannis Antetokounmpo looks healthy, at least

The status of Giannis was very much in question for Game 1, after he suffered a left knee hyperextension in Game 4 of the Eastern Conference Finals. Well, Giannis gave it a go, and he looked pretty normal out there.

The Greek Freak scored 20 points and pulled down a team-high 17 rebounds in 35 minutes. However, he did struggle in the free-throw shooting department, going 7-of-12 and hearing the 10-second countdown from Suns fans.

Game 2 seems crucial for the Bucks

While Giannis looking healthy is a great thing for the Bucks, the Suns have to feel even more confident about their chances now after finding a way to still win by double-digits with the seemingly typical Giannis out there.

The firepower that Phoenix has with Paul, Ayton, and Devin Booker (who scored 27 points and had six assists) will be difficult for the Bucks to overcome, and that’s especially the case if Phoenix grabs a 2-0 lead (which would of course force Milwaukee to have to win four times in five games).

And if the Bucks are able to find a way to win, all of a sudden they’re tied up in the series with home-court advantage. It’s a major swing game.