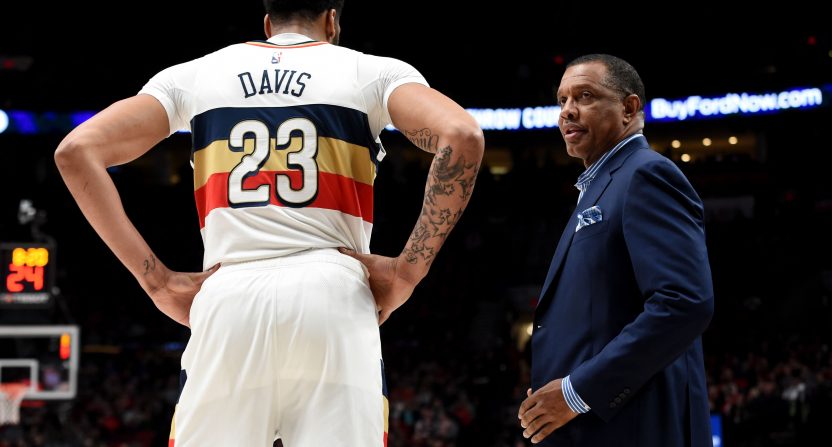 Anthony Davis doesn’t want to be in New Orleans anymore. That’s been obvious for a while, to the point that ESPN’s Zach Lowe essentially wrote an entire post in December talking about how it was inevitable, even if he didn’t (or, more likely, couldn’t) come out and say it.

So when Davis made the unusual move of formally requesting a trade (through agent Rich Paul), the idea wasn’t much of a surprise. That he did it so openly, though, is certainly a twist, and technically against the league’s tampering rules.

Agent Rich Paul has notified the New Orleans Pelicans that All-NBA forward Anthony Davis has no intention of signing a contract extension if and when presented and that he has requested a trade, Paul told ESPN on Monday.

So one day later, the league has already levied its punishment, fining Davis $50,000.

Pelicans star Anthony Davis has been fined $50,000 for his representative, Rich Paul, going on the record for trade request, violating CBA. https://t.co/oYex8zL1O3

The $50K is the most that Davis can be fined without the player filing a grievance. https://t.co/hQ5chJdF25

So what we have here is the league wanting to pay lip service to their tampering rules without putting themselves in a position to have to defend them against a union grievance. And that’s a strategic decision, because there’s no way arguing this sort of grievance could really end well. It comes down to what a player owes a team, and one thing a player pretty clearly doesn’t owe a team is silence so as to protect a team’s leverage in trading them somewhere else.

Davis and Paul’s tactic isn’t dissimilar to what Paul George did to the Indiana Pacers, when he undercut any potential leverage by publicly signalling he wouldn’t be signing an extension. The Lakers ended up being fined for tampering in that case, although they never traded for George, he stayed in Oklahoma City instead, and the Pacers traded one year of George for multiple years of Victor Oladipo, Domantas Sabonis, and a renewed hope for the franchise (until last week.)

It’s slightly different for New Orleans in that they had one more year of control remaining, but considering their season is a lost cause at this point, it might have made the most sense for them to trade Davis anyway. Whether they would have done that or not, though, is another thing entirely, and Davis clearly felt it was worth pushing the move forward, especially since all it costs him is $50,000. Davis and LeBron share Rich Paul as an agent, and there’s every chance this is a move engineered to get Davis to Los Angeles; if that happens and the Lakers are hit with another tampering fine (less likely given the Rich Paul go-between, assuming he knows how to properly cover), it’s still going to be money well spent.

So while attempting to enforce their tampering rules without having to defend them, the league has instead established a bargain rate for having your agent publicly open recruiting season. Good work all around!