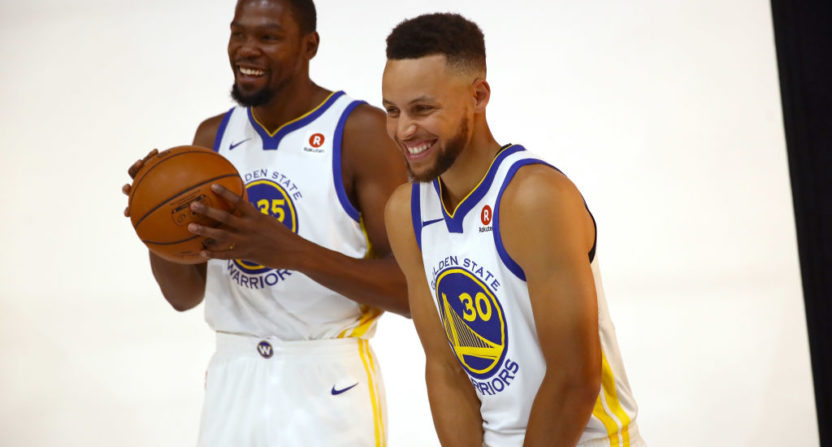 The NBA has been putting out an anonymous GM survey for 16 years and most of the time its hard to find a major consensus. Not this year however, as the league’s general managers overwhelmingly picked the Golden State Warriors to win the NBA title once again. The 93 percent of GMs who picked them (the other seven percent went to the Cleveland Cavaliers) is the highest margin ever in the history of the survey. “Only” 69 percent of GMs who voted last year picked the Warriors.

That doesn’t mean every pick was a consensus winner for the GMs this season.

As for who is going to win the Eastern Conference, the GMs are still pretty high on the Cavs (86 percent) but the Boston Celtics were the only real threats to the crown (1o percent). If we go with the top two picks in each conference as who the GMs think will be in the Western Conference Finals, it will be Houston Rockets challenging the Warriors.

If Russell Westbrook is looking for a little more motivation, he’ll find it here. Not only was Oklahoma City an afterthought in the Western Conference conversation, but the reigning MVP wasn’t even among the top five in this year’s MVP picks. LeBron James led the way with 50 percent of the votes while Kevin Durant came in No. 2 with 29 percent. For the record, they picked LeBron to win the MVP last year as well.

In case you were wondering how beloved James is around the league, he was also voted best passer, best leader, toughest to plan for, best small forward (and second-best power forward), most versatile, and highest IQ.

NBA general managers remain very big Karl-Anthony Towns fans. When asked if they were starting a franchise today and could sign any player in the NBA, who would it be, 29 percent said Towns. That’s down from 48 percent from last year, but still a ringing endorsement. Towns has been a great performer for Minnesota in his two seasons there and 21 percent of GMs still expect him to have a breakout season in 2017-2018. He’s also a major reason that the Timberwolves ran away with the most likely to be improved vote (69 percent). Towns would be wise to test the open market first chance he gets if this is how highly other GMs covet him.

The hype behind Lonzo Ball is immense, but the GMs seem to think the Los Angeles Lakers first-year player will live up to it and take home the award for best rookie. Of course, the GMs picked Kris Dunn to win the award last year with 47 percent of the vote, so take their opinion on that with a grain of salt.