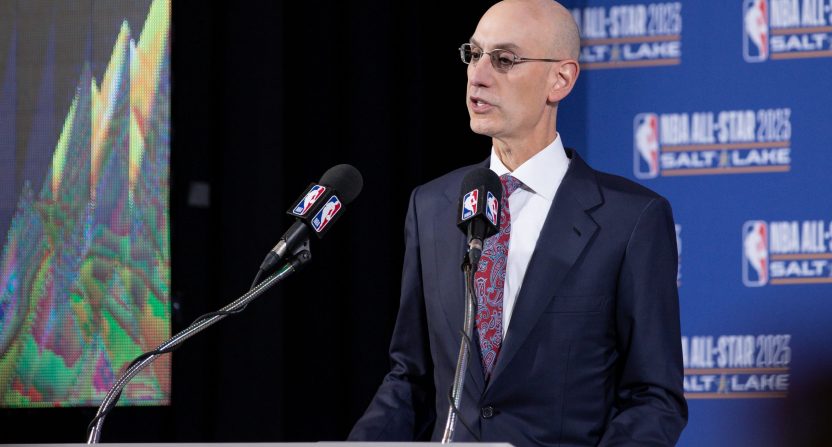 NBA commissioner Adam Silver informed the Board of Governors on Friday that the league has a July 31 target date for the return of the 2019-20 season, according to Shams Charania of The Athletic.

NBA commissioner Adam Silver and the league office informed Board of Governors that July 31 is a target date for return of season, sources tell @TheAthleticNBA @Stadium.

Additionally, Silver reportedly told the Board of Governors that the NBA has four competition scenarios for the restart:

*16 teams, going straight to the playoffs.

*22 teams, featuring a play-in tournament for the final playoff seeds.

*30 teams and a 72-game regular season, with a play-in tournament.

Sources: The NBA discussed four competition scenarios for restart with Board of Governors today:

Among the four plans discussed on the Board of Governors call today was one in which teams that are within six games of a playoff spot would be invited to compete in regular season games, then a play-in tourney for the final playoff spots, sources told ESPN.

So, those league restart competition scenarios are very interesting, and we’d need more clarity on them to assess properly.

Sources: NBA has sent GMs the results from GM survey:

Most of the general managers in the survey also said that they would like the season to end by Oct. 1, according to Charania.

If the season begins on July 31 as the NBA hopes, finishing the season by Oct. 1 could be pretty difficult, especially with the scenarios for 22 and 30 teams.

But the players have not been in favor of going straight to the playoffs, due to needing time to get back into the basketball shape — and team chemistry — they expect of themselves, as ESPN’s Ramona Shelburne notes.

Regardless of how many teams are invited, one thing the players have continuously stressed is that they don’t want to go straight to the playoffs. They need time to shake the rust off both for competitive reasons and injury risk.

The NBA still has *a lot* to figure out about returning amid the COVID-19 pandemic, and it’s unlikely there’s a solution that completely pleases everybody involved. But they’re clearly making progress, and now have a target date to shoot for. It also allows players and organizations to have over two (more) months to prepare for real games.