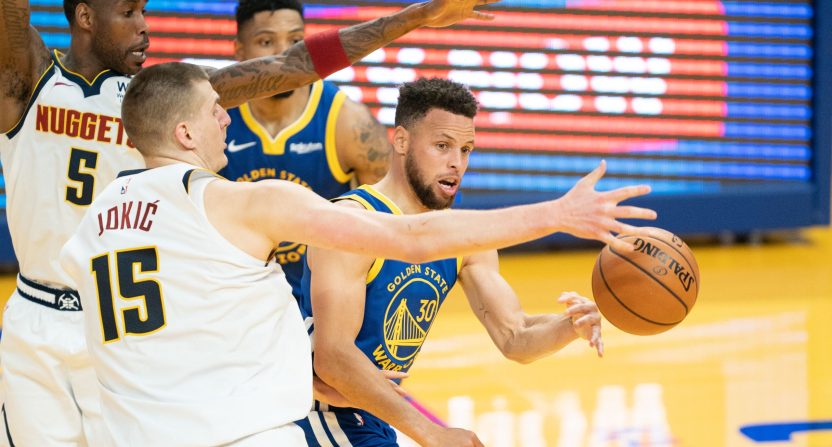 We’re closing in on the halfway point of the 2021-22 NBA season. Here’s a look at what figures to be a tight MVP race:

Steph Curry is the best player on the NBA’s best team. That makes him the odds-on favorite to collect his third MVP trophy. How dominant has Curry been? The NBA’s fourth-highest scorer leads the league in overall plus/minus at +418 – that’s 29 points better than the next guy (Utah’s Rudy Gobert). Curry propelled the Warriors (29-7) to an 18-2 start, carrying an offense against defenses designed to stop him.

The extra attention is one reason why Curry is shooting career lows in field-goal percentage (.427) and three-point percentage (39.3). But it’s also worth noting that he’s taking more three-point shots than ever before (13.4) and the second-fewest two-point tries of his career (7.1). He’s eclipsed 40 points five times, including a 50-point outburst vs. Atlanta while playing just 35 minutes.

Curry’s shooting accuracy should improve once fellow Splash Brother Klay Thompson returns. He’s expected to be back as soon as Sunday from a torn ACL and torn Achilles. Assuming Thompson looks something like the guy who’s a career 41.9-percent three-point shooter, Curry’s job will get easier, and Golden State will be in the driver’s seat for an NBA championship.

The reigning MVP has been even better this season. You can make an argument that Nikola Jokić is the greatest passing big man in history. Sure, there have been frontcourt players who were skilled at finding cutters and the open man. However, we’ve never seen a team run its entire offense through its center quite like the way Denver does.

Jokić has a chance to become the first NBA player to lead his team in every major statistical category. He’s also on pace to break the all-time single-season record for PER. That would eclipse the mark set by Giannis Antetokounmpo (31.86) during his MVP season two years ago. Jokić is ninth in the league in scoring, second in rebounding, and his six triple-doubles are third in the league.

But what’s scarier is that Jokić has vastly improved on defense. His defensive box plus-minus (4.6) is a career-high. He’s had three game-winning blocks this season. Based strictly on numbers alone, Jokić should be the MVP leader. However, Denver (18-17) has struggled due to injuries. But if he continues to play like this, it will be hard to argue against him.

Giannis Antetokounmpo is a safe bet. The NBA Finals MVP and two-time regular-season MVP is in his prime. The Greek Freak is the most unstoppable force in the league on both sides of the ball. Antetokounmpo is third in scoring, seventh in rebounding, and second in PER. Plus, he has been on a tear lately, averaging 32.6 points over his past five games – four victories.

The only thing that can apparently slow him down is COVID. The Bucks (25-14) are third in the East, but their record would be better if not for the health and safety protocols. Antetokounmpo missed five games and Khris Middleton eight. Plus, Jrue Holiday missed six games at the beginning of the season due to an ankle injury.

When the Big 3 of Antetokounmpo, Middleton, and Holiday play, Milwaukee is 16-3. They also will add guard Donte DiVincenzo (ankle) later this month. The biggest concern for Antetokounmpo? The Bucks face the toughest remaining schedule in the NBA, including three games against the Brooklyn Nets, four against the Chicago Bulls, two against the Phoenix Suns, and two against Golden State. Yikes.

The Nets were supposed to overwhelm everyone with their unprecedented offensive trio of Kevin Durant, James Harden, and Kyrie Irving. That hasn’t happened due to injuries and Irving’s refusal to get vaccinated. In last year’s playoffs, Durant reminded us of how fantastic he can be by single-handedly almost beating the eventual NBA champion Bucks. This season, Durant hasn’t slowed. At the age of 33 and in his second season since returning from an Achilles injury, the former MVP looks nearly as good as ever. The Nets (23-12) are second in the East, just two games behind Chicago in the loss column. That’s primarily due to Durant.

With Irving out and Harden off to a poor start, Brooklyn has had to rely upon Durant like never before. Forget load management. Durant is playing 36.9 minutes a game – the second most in the NBA and his most in eight years. No problem for the NBA’s scoring leader. Last month, he put up 51 points at Detroit and followed that up with a 34-point triple-double versus Toronto. But with Irving returning as soon as Wednesday and Harden playing better, Durant’s scoring load could decrease.

DeMar DeRozan will forever be the answer to a trivia question: Who is the player the Toronto Raptors traded away to get Kawhi Leonard? DeRozan played well for the San Antonio Spurs, but the team was largely irrelevant. In August, the Spurs shipped for the former All-Star to the Bulls, where he has emerged as the league’s best off-season acquisition. DeRozan has exceeded all expectations. His scoring average and PER are the second-highest figures of his career. But more importantly, he helped make Chicago matter for the first time since Derrick Rose’s 2010-11 MVP season. The Bulls (25-10) have the best record in the East after going 31-41 last season.

DeRozan owns one of the signature feats of the season. This past weekend, he became the first player in NBA history to make game-winning baskets in consecutive nights. On New Year’s Eve, he beat the Indiana Pacers with a three-pointer. On New Year’s Day, he defeated the Washington Wizards with another three. As long as Chicago stays in the hunt for the top seed, DeRozan will be an MVP candidate.