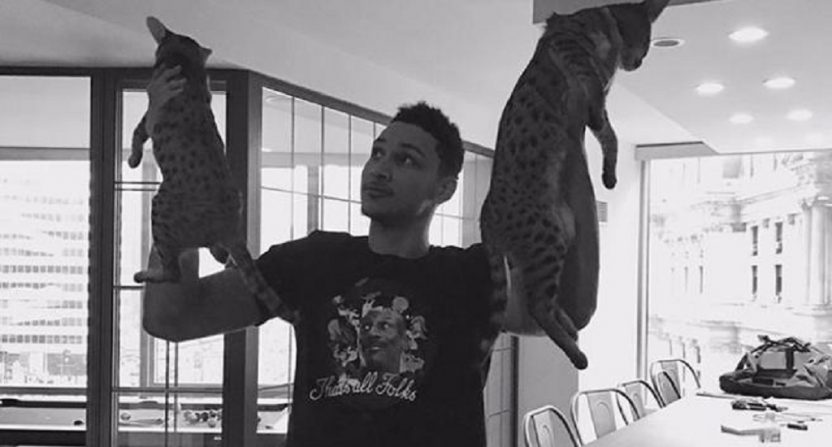 I’m not sure I’ve seen anything as ridiculous as Sixers Twitter in the sports world. First we had #TrustTheProcess and Joel Embiid’s shameless All-Star campaign, and now #RaiseTheCat is reaching new heights with official shirts landing on the NBA’s online store.

What is “Raise The Cat”, you ask? Just a totally normal thing where 76ers fans share photos on social media after wins, raising their cats in the air in celebration.

Sixers fan Dennis Grove started selling the shirts online with proceeds going to Philly PAWS, a no-kill animal shelter. As Dan Levy of Billy Penn writes, Grove is now considering hiring a lawyer after the NBA took his idea seemingly for profit. It’s not totally clear if the NBA is profiting off these shirts, but there’s no indication they are sticking by Grove’s intention to benefit charities.

Grove was a bit put off by the NBA taking his idea. From Billy Penn:

“I’m trying to get something going here,” Grove said by phone Tuesday, “because I definitely want the term to be used for a good cause, and not just for a t-shirt.”

“If it’s a t-shirt,” Grove said, “it better be for a good cause. I’ve been guilt-tripping a lot of people who have t-shirts so far into [donating], so now we have the big fish — the NBA — doing it, so this is a little weird to me.”

Inspired by Ben Simmons’ cats, the Raise The Cat craze started with Grove back in November, and eventually Simmons got wind of the hashtag.

It’s gotten to the point where there is a Raise The Cat cam during timeouts at Sixers games where fans can pretend to hold up a digital cat on the video board.

To be fair, while raising your cat in celebration may seem unusual, remember that this whole winning thing is new to 76ers fans. They’re still figuring out what to do with it.