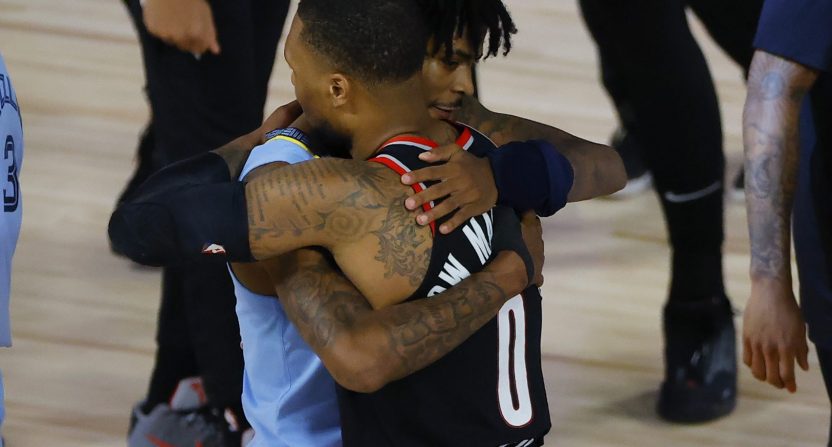 The Grizzlies and Blazers played a highly entertaining game today that saw Portland send Memphis home from the bubble with a 126-122 win.

Had Ja Morant and the Grizzlies pulled out a win, they would have played a winner-take-all game for the #8 seed in the West and the chance to take on a Lakers team that looks more vulnerable now than they did pre-pandemic.

Instead, we get Dame Lillard, Melo, a returning Jusuf Nurkic, and the rest of the Blazers in that spot. We also had more drama the other night, when Phoenix, having gone 8-0 through the bubble, saw their season end thanks to a tight Portland win over the Nets. Without the bubble’s unique play-in rule, we wouldn’t have had any of that meaningful basketball. The final seed would have been determined by record or tiebreaker, and that would have been that.

In fact, without the play-in chance, the Suns probably would have packed it in for any other regular season. One of the NBA’s main flaws is the binary nature of how teams approach competition: either they’re trying to make the playoffs or they’re likely okay being as bad as possible. At the very least they’re not going to push hard; there’s no incentive, obviously, and the lottery provides a much bigger reward.

The league is obviously aware of this, and last fall proposed a 78-game season with play-in tournaments for the final two spots in each conference. That didn’t get traction for a variety of reasons, not least of which being leagues are change-averse.

Now that the bubble essentially forced it upon teams for one season, though, it’s more than possible that it could be revisited as an option going forward, especially considering how well it played out. Adam Silver hopes for as much, as he told SI’s Chris Mannix:

“I do see this as something we would embrace going forward,” NBA commissioner Adam Silver told Sports Illustrated. “As you know I’ve been talking about it for a while. We saw this as an opportunity to institute a form of it. I’m not sure if this would be the exact format going forward. But this is something we’d like to see stay.”

Mannix talked to two coaches who weren’t nearly as excited about the prospect, though:

The proposal didn’t go anywhere but Silver, clearly, would like to see at least the play-in series be made permanent. Said Silver, “I think it would be a great addition to the league.”

That feeling, however, isn’t widely shared. The pushback is that the NBA already has an 82-game season to decide the playoff teams. And there is the issue of the top seed, having played all year to earn that spot, having less time to prepare for a first round opponent.

“The play-in format is exciting,” Sixers coach Brett Brown said. “[But] I think with 82 games, that in itself warrants somebody getting in or not. So if I had to vote, I would vote no.”

Said Frank Vogel, “I’ll leave that in Adam Silver’s hands. They do a great job of being innovative and trying to make the game better in any way they can. I typically am a traditionalist … but I’ll leave that in the league’s hands.

Obviously there’s no guarantee that every year a play-in rule would result in Ja Morant and Dame Lillard going back and forth on a Saturday afternoon with seasons on the line. But it’s not just about the play-in games themselves; offering this (along with potentially tweaking the lottery further) could really be a way to forestall teams tanking, even if it only delays it for a few weeks.

That seems worth exploring, and having the potential for a pre-playoff television event doesn’t hurt either.