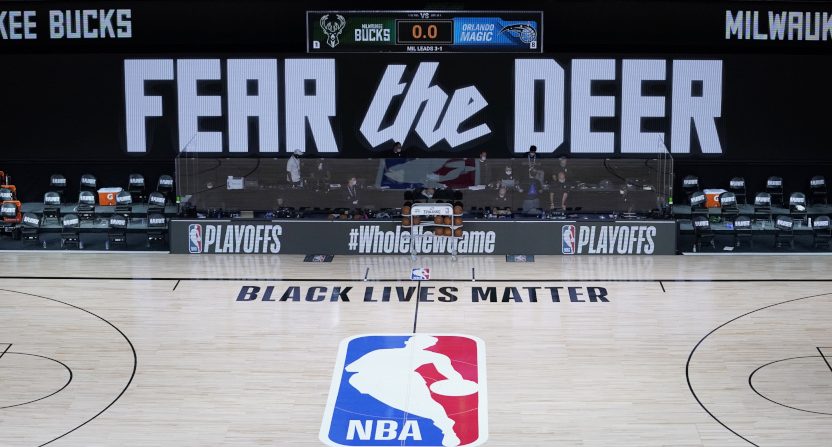 The NBA playoffs took a remarkable turn Wednesday when the Milwaukee Bucks didn’t come out for Game 5 of their series against the Orlando Magic. The Bucks didn’t come out for warmups as scheduled, and both ESPN’s Adrian Wojnarowski and The Athletic/Stadium’s Shams Charania reported shortly after that the team was considering not playing. The Magic then left the court themselves, and both Charania and Wojnarowski then reported that the Bucks were in fact going to sit out this game in protest of the police shooting of Jacob Blake in Kenosha,Wisconsin. Here’s how the actual announcement of this looked on NBA TV, which was set to carry the game, with Bob Fitzgerald, Jim Jackson, and Rebecca Haarlow (sidelines) on the broadcast and Chris Miles in the studio:

Fitzgerald: “Chris, as is being reported, and I think you will know, I don’t think we’re going to have a Game 5 here. Many more significant and serious discussions, but the NBA fully aware of what’s going on in the real world. And we normally enjoy sports as the toy department of life, but I mean, this is too important as to what’s going on in the United States.”

Charania then reported that the Houston Rockets and Oklahoma City Thunder planned to also not play their game, and Yahoo’s Chris Haynes reported that the Los Angeles Lakers and Portland Trail Blazers were “leaning towards” not playing their game. Charania then added that the Lakers and Trail Blazers went to a full decision not to play, and that the NBA had officially postponed all of its Wednesday games. The NBA also released this statement:

The NBA and the National Basketball Players Association today announced that in light of the Milwaukee Bucks’ decision to not take the floor today for Game 5 against the Orlando Magic, today’s three games – Bucks vs. Magic, Houston Rockets vs. Oklahoma City Thunder and Los Angeles Lakers vs. Portland Trail Blazers – have been postponed.  Game 5 of each series will be rescheduled.

As for the Bucks themselves, Andy Larsen of The Salt Lake Tribune had a tweet on some of their players’ personal connections to police violence:

Bucks player Sterling Brown had a knee to his neck and was punched by Milwaukee PD for parking incorrectly.

Former Buck John Henson had the cops called on him while shopping for jewelry, just for being black.

This is personal to them.

And Alex Lasry, a senior vice president with the Bucks, tweeted in support of the players:

Some things are bigger than basketball. The stand taken today by the players and org shows that we’re fed up. Enough is enough. Change needs to happen. I’m incredibly proud of our guys and we stand 100% behind our players ready to assist and bring about real change

Update: The Bucks later put out this statement:

The Bucks statement, in print: “When we take the court and represent Milwaukee and Wisconsin, we are expected to play at a high level, give maximum effort and hold each other accountable… In this moment, we are demanding the same from our lawmakers and law enforcement.” pic.twitter.com/LrLKtsNvWs

Meanwhile, on the media side, Turner Sports’ Ernie Johnson appeared on corporate sibling CNN to discuss the NBA news with Wolf Blitzer. Here’s a key part of that segment, with Johnson talking about how the Blake shooting’s proximity to Milwaukee made it particularly hit home for many of the Bucks:

There’s definitely a lot more to come here, and it may not be just about Wednesday’s games. ESPN’s Marc J. Spears reported earlier Wednesday that the Toronto Raptors and Boston Celtics have had discussions about boycotting Game 1 of their series tomorrow, and Sports Illustrated’s Chris Mannix tweeted that the discussion may go well beyond a day or two:

Question is no longer if players are prepared to boycott one game — that’s happened. It’s how many they will. There have been discussions amongst several teams, notably Toronto, about going home.

We’ll see where it goes from here.