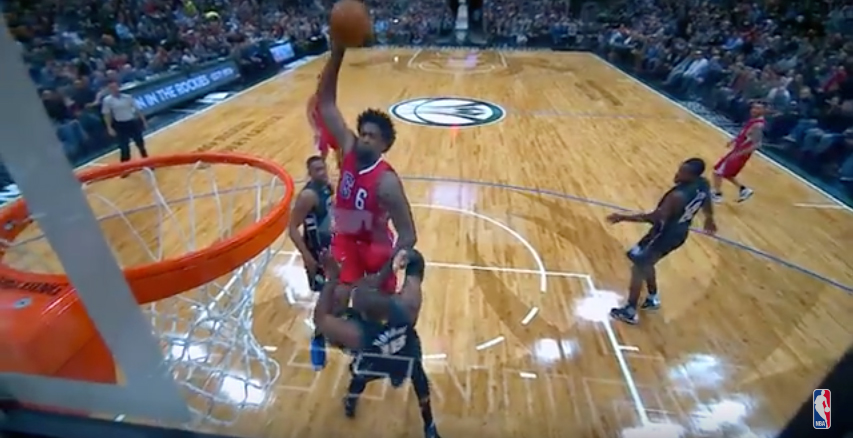 In the previous two weeks, The Comeback NBA Power Rankings have taken a look at the best rookies and the best point guards in the league. This week, we decided to switch things up a little bit and check out the best dunks that have been thrown down so far this season. We’re only a little more than a quarter of the way through the year, but hoo boy, have there been some ridiculous jams. Let’s get into it.

Due to the highly upsetting nature of this dunk, all video footage of it has been permanently destroyed by order of the Royal Court.

Ridiculous. Kawhi Leonard is so incredibly good. Mason Plumlee had absolutely no chance on this one. By the time he turned around, Leonard was already flying through the air.

Bow down to the King.

Oh no, poor Ersan. My man couldn’t have been expecting Jordan Hill to rise up and bang one like this.

Greg, just get out of–noooooooooooo! Greg, buddy, you can’t try to take a charge there.

5. Will “The Thrill” Barton on Donatas Motiejunas

Will Barton heard that we were going to rank the best dunks of the season, and he figured he had to get himself on the list. So last night against the Houston Rockets, he unleashed an insane slam on Donatas Motiejunas.

First Barton got Trevor Ariza to go flying past with the shot fake, giving himself an open runway to prepare for liftoff. In retrospect, Motiejunas should have just taken his front row seat and watched that dunk happen, because by the time he made the decision to help, Barton had already initiated the flight sequence.

The height Barton gets on this slam is something else. No wonder they call him “The Thrill.”

We’ve seen miracle tip-ins on out of bounds plays to win games before, but I can’t ever remember someone going up and jamming one home. Everything about this play is just run to perfection by the Grizzlies.

Mike Conley sets a good screen, Courtney Lee makes a beautiful pass, and Jeff Green does the rest, rising high above the defense to catch the ball and slam it home. Uncle Jeff’s play may be inconsistent, but his leaping ability is not.

It didn’t take long for Harrison Barnes to get himself on the dunk of the year lists, as he put down this jam just a few days into the season. Once again it’s Trevor Ariza who gets beat initially, forcing one of his teammates to try and step up. And once again, his teammate is too late.

This time, the victim is Dwight Howard. Dwight has thrown down his fair share of posters, but Mr. Barnes gave him a taste of his own medicine with this one. Unfortunately for Howard, he was so far under the basket when Barnes started his drive, that by the time he could get into a position to block the shot, Barnes was already halfway done with the dunk.

Which, as you can guess, means Howard was far too late to do anything but become part of Barnes’ poster. Oof. Barnes threw that one down with some authority. Bonus points to the Warriors bench, specifically Andre Iguodala, for the fantastic celebration.

It takes something pretty special to get people watching at home up out of their seats, but Demar DeRozan did that when he yammed on Rudy Gobert a few weeks back. This was one where if you were lucky enough to be watching live, which I was, you won’t ever forget it.

In part due to the ferocity of the slam, and in part due to the fact that it came out of nowhere, I jumped up and made some sort of noise which I don’t think I could replicate. One second DeRozan was just driving to the basket, and the next second he was in mid-air, about to throw down one of the nastiest dunks we’ve seen in a long time.

Oh, and he went over and through Rudy Gobert, one of the best defenders in the league, to do it. Gobert wasn’t even super late to challenge him either. He got a good contest in, but DeRozan would not be stopped. No one dunker should have all this power.

From a pure feat of athleticism point of view, DeMar DeRozan’s slam on Rudy Gobert was the most impressive this season. In a vacuum, it’s unlikely anyone will throw down a more impressive dunk.

But context matters. Even when it comes to slamming and jamming. Which is why Kevin Garnett’s effort on Blake Griffin is the dunk of the year so far.

First of all, it’s the year 2015, and Kevin Garnett is still playing in the National Basketball Association. Two. Thousand. And. Fifteen. This is his twenty-first season of professional basketball, and as we all know, he’s far past his prime.

Really he probably shouldn’t still be out there, but he loves the game too much to walk away just yet. So out there he goes, tutoring Karl-Anthony Towns and the rest of the young Wolves with the same passion and intensity he’s brought for the past two decades. His athleticism may have left him, but his knowledge of the game never will.

And last week the basketball gods rewarded his commitment to the game by giving him one last show-stopping moment. Out on the fastbreak, Ricky Rubio drew Blake Griffin’s attention, then did what he does best, and set up KG perfectly. All Griffin could do was turn around, put his hands up, and watch the show.

Garnett rose above Griffin and crushed the one-handed slam right on his head. The power-forward throne may now be Griffin’s, but Garnett reminded him of who used to be King.