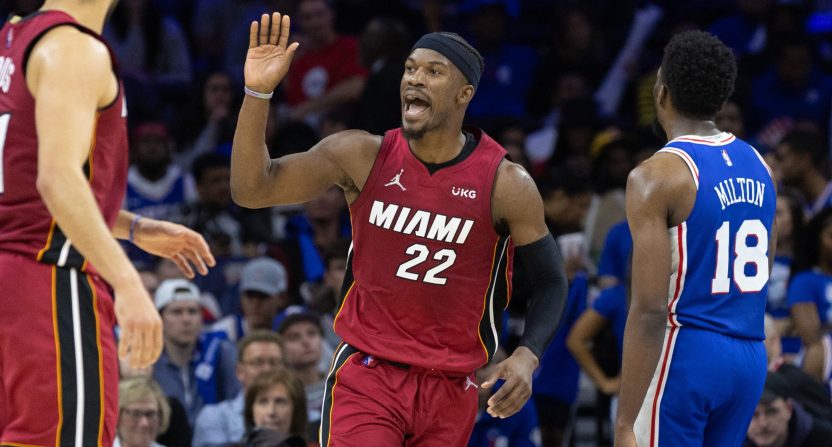 The Miami Heat are going to the Eastern Conference Finals for the second time in three years, and the Philadelphia 76ers have been eliminated from the NBA playoffs.

Miami went on the road and took down Philadelphia 99-90 Thursday night in Game 6 to win the second-round playoff series 4-2.

The Heat move on to the Eastern Conference Finals, and the 76ers go home. 🏀 pic.twitter.com/FgyKbwTWa8

On to the Eastern Conference Finals! pic.twitter.com/Spl099Yuaq

It was a pretty brutal way for the 76ers — who entered the game as two-point favorites — to go out. A roster featuring Joel Embiid, James Harden, Tyrese Maxey, and Tobias Harris went down without much of a fight in the second half of Game 6.

After leading by one point at halftime, Miami outscored Philadelphia 25-15 in the second half and led by as many as 20 points in the fourth quarter.

The Heat are taking it to the Sixers right now in Game 6! 🔥 pic.twitter.com/7ganbVmDtJ

Harden — acquired by Philadelphia in a blockbuster in-season trade with the Brooklyn Nets — scored just 11 points and only attempted nine field goals. He didn’t score a single point in the second half.

James Harden attempted just 2 shots in the 2nd half, missing both, as the 76ers are knocked out of the playoffs.

Harden's last made bucket was at the 3:31 mark of the 2nd quarter. pic.twitter.com/bYRUGIUOfl

Embiid — who played with a mask after suffering a right orbital fracture and concussion, and who has torn ligaments in his right thumb — scored 20 points on 7-of-24 shooting from the field.

Jimmy Butler led the way for Miami with 32 points.

Miami will face the winner of the Boston Celtics-Milwaukee Bucks series in the Eastern Conference Finals. The Heat will look to reach the NBA Finals for the second time in three years (they lost 4-2 to the Los Angeles Lakers in 2019-20).

The basketball world has had plenty to say about the game, and especially about the Sixers’ extremely disappointing exit:

Stephen A. Smith on James Harden and Doc Rivers after the Philadelphia 76ers were eliminated by the Miami Heat. 🏀🔥 pic.twitter.com/yL3YVij1dp

The @MiamiHEAT will advance to their 8th Eastern Conference Finals in the last 17 years.

Miami got the 1-seed so they got an easy opponent they dispatched, so no one noticed. Embiid got hurt, so that’s the storyline.

Fun fact: The Kings have made the Conference Finals more recently than the Sixers. pic.twitter.com/g9EiMd9B3m

got simmons off the roster just for harden not to shoot with the season on the line. i gotta admit that's pretty funny.