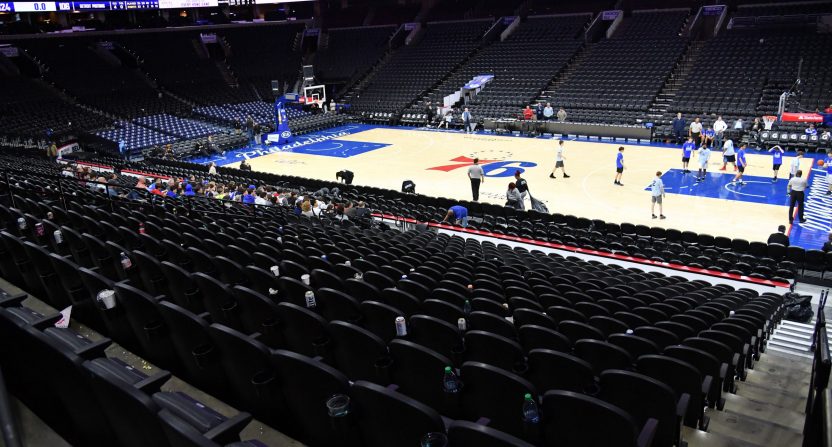 On the heels of Major League Baseball trying to figure out contingency plans for their season, the NBA is looking at ways to finish their own season. Teams have around 17 games left in their regular season and with nearly 80 percent of the season completed, they’re looking a ways to potentially find a way to finish it up when the time is right.

Reports from NBA insiders have pinpointed Las Vegas as a potential destination for finishing the NBA season in some form. ESPN’s Adrian Wojnarowski went in-depth discussing how games could be played in a ballroom or training facility. As long as there’s room to fit as many basketball courts as possible to get some games in. Wojnarowski also noted that a shortened regular season and postseason has been considered.

“Las Vegas has been a destination that has been discussed, built around the idea of literally perhaps using a casino, playing games in potentially a ballroom with courts. There’s lots of different scenarios …”

—@wojespn on how the NBA may try to make its initial return pic.twitter.com/KfFg6Nb8CU

SI’s Chris Mannix followed suit and while he didn’t necessarily mention a regular season, he talked about how the playoff teams would be quarantined at the same location in Vegas to have some sort of postseason.

The NBA is exploring the idea of holding its entire postseason in Las Vegas, sources tell @SIChrisMannix https://t.co/PkFOxWreGg pic.twitter.com/TbSIXrWfrD

If one looks at this as an escape, a potentially truncated postseason that people can watch on TV is a great idea. But while that’s a possibility, there are a couple major concerns that could keep this from happening for a while.

First, there’s still going to be a lot of people at the same location, even if they are all quarantined. With players and important personnel for 16 teams, you’re looking at nearly 500 people just from the teams. Adding in referees, league officials, media, TV and radio, that number goes up. Considering how COVID-19 spreads, and we still don’t have the ability to test everybody, it can be very easy for someone to spread COVID-19 without knowing and all it takes is one person in that 500+ person group before the quarantine is useless. Skipping the rest of the regular season and going straight to the playoffs would at least keep half the teams from needing to be there.

Second, even though every step is taken to account to limit the number of people, the NBA would still need a bunch of medical personnel and resources to run this. Hospitals and medical personnel are already maxed out fighting against COVID-19. Diverting people to work NBA games is at best, a PR nightmare. At worst, it would affect lives and possibly slow down efforts.

If the NBA, or any league is looking to do something to continue their season, having everything in one place is at least better than the regular way. Because if there’s a situation where the rest of the country has everything under control but a market like New York City is still seeing lots of new cases, you can’t have games in NYC as a result. But even though it’s better to have everything in one place, the alternative still might not work.