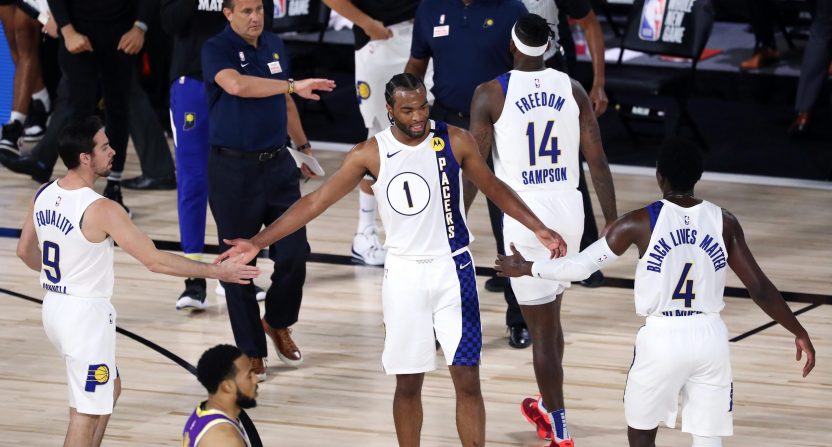 NBA bubble play rages on, with most teams having played five or six games. Many have been uneven, as expected — these are warm-up games as much as they are seeding games. The Bucks have lost three of their five games, including one to the Zombie Nets. The Clippers have taken to resting players. Only the Suns are undefeated.

As teams round into form, we can gather some takeaways. Some have looked better suited for playoff success in Orlando than others:

Let’s start with the Pacers, whose only bubble loss has been to the mighty Phoenix juggernaut. It seems that TJ Warren was bitten by a radioactive spider or something during quarantine, because he has been absolutely scorching hot in Orlando. He’s shooting seven three-pointers a game and hitting 55 percent of them. He was shooting 37.5 percent on three attempts per game before the season stopped.

Warren leads all NBA players in scoring in the bubble, and appears to have turned into some Michael Jordan-Kevin Durant hybrid out of nowhere. The Pacers are plus-19.5 points per 100 possessions with Warren on the floor since the restart. He’s been a pure bucket-getter, able to score from everywhere on the floor and punishing defenders who give him space.

Against the Sixers in the first game, in which he poured in 53 points, he reigned threes from the top of the key when Ben Simmons went under screens. He finished tough shots at the rim and made clever cuts, sometimes popping up in the dunker slot and other times finishing catch-and-shoot mid-rangers. It’s anyone’s guess how long he can keep this up — one negative has been his free throw attempts, which are notably lower than the other top scorers — but if he still has some juice in the first round of the playoffs, the Pacers will be a tough out.

The injury to Domantas Sabonis, an All-Star this year and one of the best screen-setters in the league, will likely hurt more when Indiana is dealing with a tough Eastern Conference opponent in a seven-game series. Sabonis opened up offense for them as a finisher and distributor; he averaged five assists per game this year.

It will be up to their scorers and gunners to generate offense in the half-court. They’ve been willing to roll out the tandem of Victor Oladipo, Malcolm Brogdon, and Aaron Holiday to go along with Warren and Myles Turner; a quick, small lineup that could struggle size-wise on defense. Justin Holiday and TJ McConnell will bring penetration and shooting off the bench.

There are questions, and the injury to starting guard Jeremy Lamb before the postponement doesn’t help, but Indiana has beaten the full-strength Sixers and Lakers in the bubble. Warren’s leap into superstardom, however temporary it could be, has some people buying Pacers stock.

Though they’ve clinched the top seed in the Western Conference, there’s growing worry that the Lakers don’t have enough to make it out of the Western Conference. They lost ball-handlers Avery Bradley and Rajon Rondo prior to the restart, and have looked rusty, at best, in the bubble. Their offensive rating of 97.9 ranks dead last since the restart, and only the Wizards have a worse net rating.

Despite this, they have a win against the Kawhi Leonard-Paul George Clippers (though Lou Williams and Montrezl Harrell would certainly have made a difference), and they also beat the full-strength Jazz. LeBron James, as you may have heard by now, hasn’t been his MVP-level self during the restart. There has been cryptic messaging about why he and the Lakers have underperformed.

The Lakers will be fine at least until the conference finals if they can start hitting outside shots, which they have struggled to do so far. Danny Green, a notoriously streaky shooter, is shooting 14 percent from three. James is at 28 percent, and as a team they’re shooting just 25 percent, by far the worst in the bubble. LeBron is the best in the league at generating quality threes. Much of their regular season success came from players like Green and Kentavious Caldwell-Pope hitting some of them.

Given the way they’re playing now, it’s hard to see them finding an elite, championship-level gear. The Clippers are incredibly deep and talented, and teams like the Rockets and Nuggets seem to pose major threats. The case for the Lakers comes down to trusting LeBron James and Anthony Davis to find a way. There are worse bets out there.

Along with Warren and Michael Porter Jr., the Blazers’ Gary Trent Jr. is the breakout star of the bubble. As the Blazers grapple for the ninth spot in the Western Conference, Trent has emerged as a valuable high-leverage minutes guy, hitting threes at an insane rate and providing a catch-and-shoot option alongside Damian Lillard and CJ McCollum. Prior to a 1-for-6 performance from three in a win over the Sixers on Sunday, he was shooting an absurd 62 percent from long range on 45 attempts.

A full-strength Blazers have been oversold as a legitimate contender to upset the Lakers in the first round, but there’s no doubt that they’re a better team now than they were in March. The return of big men Jusuf Nurkic and Zach Collins provides Lillard with pick-and-roll presences and finishers at the rim, in addition to improved defense over Hassan Whiteside.

Lillard is playing at the level that saw him receive top-five MVP votes in the regular season. He scored 51 against the Sixers, and while his missed free throws against the Clippers found him embroiled in an Instagram comment war, he has put Portland in a position to challenge the slumping Grizzlies for the eighth seed.

Facing a tough schedule, the Mavs haven’t been flawless in the bubble (they’re 2-3). But Luka Doncic lit the world on fire in their win over the Bucks, and Kristaps Porzingis is averaging 29.4 points per game, tied with Devin Booker for seventh in the bubble. The league-best offense the Mavs ran out in the regular season has continued to impress, putting up 149 points in an epic overtime loss to the Rockets and producing a thrilling 136-132 OT win over the league-leading Bucks.

Doncic runs everything as a LeBron-style point forward. It seems as though he’s improving every game, discovering new ways to navigate NBA defenses and new passes to exploit. He’s exceptionally crafty in the lane with defenders hanging on him. His handles are tight and his body is shifty, creating previously nonexistent lanes and toying with defenders. He’s launching 10 threes per game, and while he’s still shooting a below-average 33 percent, his confidence is promising.

It’s fair to say that Doncic is a top-five player in the NBA at the age of 21. The supporting cast could use extra ball-handling and rim protection — though Trey Burke has been great in the bubble, and Porzingis does block some shots occasionally — but Doncic lifts everyone up.