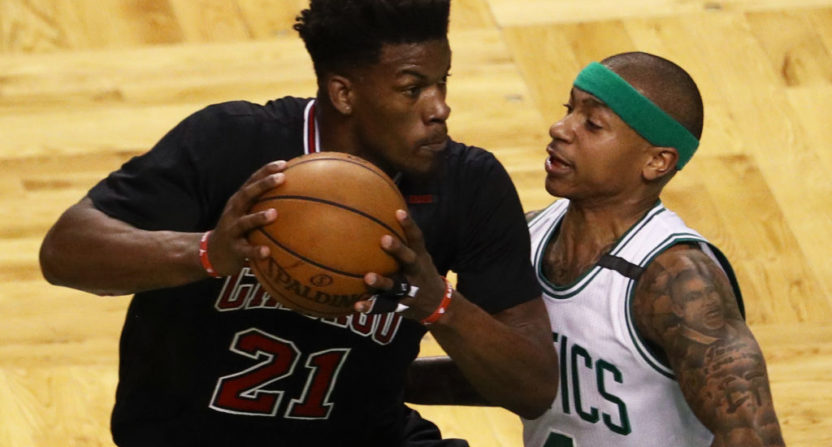 The NBA offseason is already running wild, so it can be difficult to tell for sure what is real and what is not. As for the future of Chicago Bulls star Jimmy Butler, nothing could be more of a hot topic this week.

Butler was previously reported to be a top target for the reigning Eastern Conference champion Cleveland Cavaliers. Fresh off a 4-1 NBA Finals defeat at the hands of the Golden State Warriors, the Cavs could use Butler to form their own super team of sorts, and Butler reportedly wants to play for a championship contender. Such a fate does not appear to be likely in Chicago anytime too soon, but how long the door stays open in Cleveland remains a mystery. And given recent headlines, Butler may even be getting some advice from Cleveland players to keep a good distance from the Cavs.

A report from the Chicago Sun-Times suggests there are players on the Cavaliers reaching out to Butler and suggesting he stay far, far away from Cleveland, as the team’s front office appears to be in some turmoil. That would seem to make sense given the recent dismissal of general manager David Griffin, which leaves the door wide open for the possibility of a year of speculation about whether or not LeBron James will even stick around, not to mention Kyrie Irving and Kevin Love.

The idea of Cavs players telling Butler to not push for a trade to Cleveland has already been disputed by some.

So, what happened here? Was the report from Chicago Sun-Times writer Joe Cowley accurate or misinformed? Is Amico’s follow-up report via Twitter any more credible? Could both reports be accurate based on their own set of sources?

Ahh, the NBA rumor mill. It keeps on spinning out of control and no restraint. Let it continue to roll merrily along.