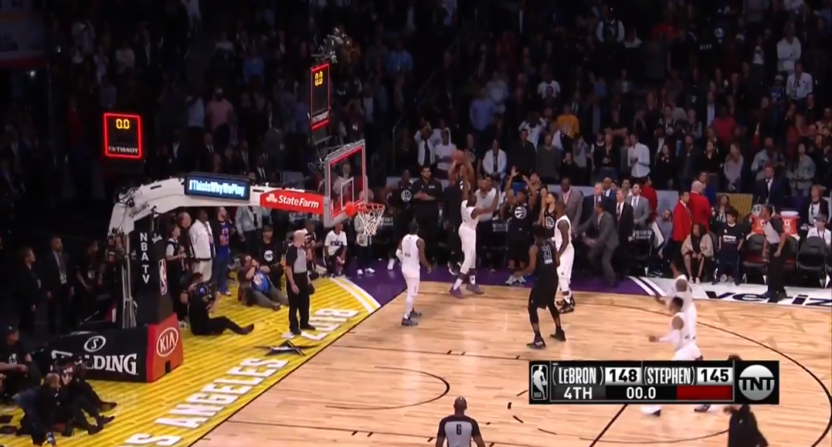 The new NBA All-Star Game format was a success. The longtime Eastern Conference vs Western Conference was replaced with a new team captain format, with this year’s being Team LeBron vs Team Stephen (which included a draft we unfortunately weren’t able to see).

And the game was a highly entertaining, competitive battle.

Team LeBron ultimately came away victorious, 148-145, and fittingly it was LeBron James that came away as the game’s MVP. James nearly had a triple-double, with 29 points, 10 rebounds, and eight assists.

But what really stood out was the actual *defense* being played late in the fourth quarter, and particularly in the final minute.

Joel Embiid had this awesome block on a Paul George drive with under 50 seconds left:

And the final play really showed off terrific defense, with LeBron’s squad preventing Steph Curry and DeMar DeRozan from getting off a shot:

KD literally patted himself on the back pic.twitter.com/Z1nALfzif5

Unlike the pregame festivities, the All-Star Game was very well-received on Twitter.

I love how hard these guys are playing in the fourth. New format is awesome. Draft the teams every year. #NBAAllStar2018

There was more defense played in the last 10.7 seconds of this game than in the last three All-Star Games combined.

This is the best #NBAAllStarGame I’ve seen since the #Jordan era.

And how bout defense at the end being the difference. Keep this format. It worked. A fun and entertaining All Star game.

Man both teams actually playing defense this is great!

This All Star game was wayyy better than the last few years.

Yeah Team Captains was an awesome idea. This year's All Star Game was WAY Better. Both teams actually cared who won and there was so much more energy. Good job NBA

That was the best all star game in a long time ??

A couple thoughts:
1. Best NBA All Star game in years. Best since MJ's last one that went to OT.
2. If you're not an NBA fan, this is the time to watch. Best talent/quality of play in a LOOOOONG time.
3. Wish Boogie Cousins (and all the injured folks) was out there.

That was a good all star game. New format is dope