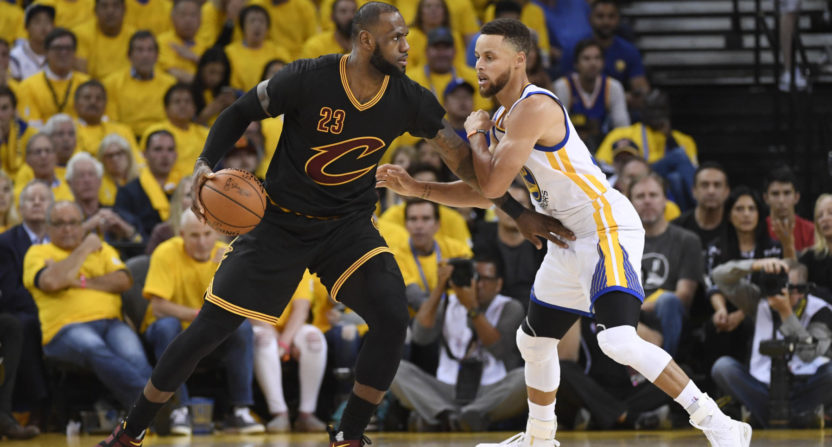 Some time in the next 36 hours or so, LeBron James and Steph Curry will channel their inner gym-class hero and pick teams for next month’s NBA All-Star Game. And although the NBA won’t announce the results of the draft, it has shared the rules:

Bearing those rules in mind, two of our writers, Jay Rigdon and Alex Putterman, took a stab at a mock draft. Here’s what they came up with.

Alex: To join LeBron in my team’s frontcourt, I’m taking The King’s biggest (only?) rival, Kevin Durant. I considered going with a backcourt player to complement LeBron, but in the end I’m going with the second-best player in the world. LeBron’s playmaking and Durant’s shot-creating should work well together, even if they nominally play the same position.

Jay: Since the Durant pick prevented me from pairing up the two Golden State starters, and since we’re already set at point guard, I’ll go with James Harden. Harden can shoot and set up others (including Steph himself), and his only real weakness (defense) is mitigated by the fact that it’s the All-Star Game.

Alex: Darn, Harden was going to be my next pick, and now I’m in a tough spot. I think Giannis is the best player on the board, but he’d be my third power forward, and although I could use a point guard, I’m not sure I want Kyrie and LeBron on the court together. With that in mind, I’ll go with reigning All-Star Game MVP Anthony Davis. He’s got the track record in this game.

Jay: I was prepared to take either Giannis or Anthony Davis inside with my next pick, and I’m pleasantly surprised to see Giannis still available. As you noted, he’s pretty clearly one of the most talented players in the league now, and oh, the lobs we’ll throw. Steph and Harden should provide plenty of spacing, too, should we actually need to grind out a possession in the half-court.

Alex: Sigh, now I’ve got little choice but to go with Kyrie. He and LeBron may not be best buds, but hopefully they can still connect on some alley-oops. If Durant and Westbrook could do it last year, anything is possible.

Jay: Interesting! The Kyrie/LeBron dynamic would be incredibly fascinating to watch and is a nice side effect of the Giannis selection. Looking at who’s left on the board, with two slots to fill in the starting five, I’m going to take Joel Embiid. LeBron’s team already has an absurd amount of length and athleticism, but drafting DeMar DeRozan here really wouldn’t help with that, so we’ll have to try to address it with the reserves. Embiid can play down low or as a stretch big, which is the most versatility left on the board.

Alex: I’m already second-guessing whether I should have taken Giannis before and waited to get Embiid later. Oh, well. In a vacuum, I’d likely prefer DeMarcus Cousins to DeRozan, but given the team I’ve drafted, I’m going to take the guard. Luckily, DeRozan is the exact type of player who thrives in All-Star Games: athletic, bouncy and not afraid to shoot. With Anthony Davis at the 5, I’m going to have a fast-paced, high-scoring starting lineup.

Jay: That leaves me with DeMarcus Cousins, which is fine. It’s not ideal with Embiid, but there’s plenty of minutes to go around, and Cousins is used to playing in a twin-towers setup with Davis.

Alex: So to recap, my starting lineup is as follows:

Now onto the fun part. You get first pick of the reserves.

Jay: The first choice might be a bit obvious, all things considered, but since we’re in need of both wings and capable wing defenders, it makes all the sense in the world to add Steph’s fellow Splash Brother to the roster. Klay Thompson can play with just about anyone, and you can’t leave him open.

Alex: With my first reserve, I’ll continue to prioritize offense over everything. Give me Russell Westbrook, and don’t be surprised if he winds up playing crunch-time.

Jay: I’m going to continue my 3-and-D assault by taking Jimmy Butler, one of the best two-way wings in the league.

Alex: I suppose I’ll need another big man, so I’ll take LaMarcus Aldridge, one of the league’s most underrated stars. Quietly, he has been the best player on a 30-18 Spurs team that has barely missed a beat without Kawhi Leonard.

Jay: While Steph and Harden can handle a lot of the handling, if I’m going to play them together it makes sense to get a backup point guard. Considering the options remaining, Dame Lillard stands out for his combination of scoring and playmaking.

Alex: I could use a two-way wing for my second unit, and I’m disheartened to see that you took the two best options. Luckily, Most Improved Player front-runner Victor Oladipo is still on the board. I’m a little skittish here because we know Westbrook doesn’t bring out the best in Oladipo, but I’m not going to let that stop me.

Jay: Oladipo is a great pick, and arguably should have been in the starting pool. With an eye on harassing shots at the rim, and a desire to put as much length on the floor as possible to contend with LeBron/Durant/Anthony Davis, I’ll go with Kristaps Porzingis. He’s good for multiple highlight plays, can play all over, and imagining him on the court with Giannis is a fantastic thought.

Alex: Give me Bradley Beal. He may be overshadowed by John Wall, but he has become a really excellent all-around player whose marksmanship will be valuable in a second unit that’s otherwise short on shooting. Also, has anyone ever done a study on whether first-time All-Stars play harder/better in the game? There could be something there.

Jay: I’ll continue my run of versatile players by taking Draymond Green; that gives me 3 of the 4 possible Warriors, who can work well together, while adding another irritant to the mix as well.

Alex: I’ll now take another first-time All-Star, in Karl-Anthony Towns. Towns may not offer much on the defensive end, but this is the All-Star Game, so I’m not going to sweat that. I wouldn’t be surprised to see the young and hungry KAT drop 25 off the bench.

I would like to pause to note that all of the four remaining players compete in the Eastern Conference, which says a lot about where the talent is (and has been for a while).

Jay: That’s true, although it’s arguably closer than it has been in a while; Gordon Hayward’s injury isn’t helping either.

Jay: I’ll go with Kevin Love here. He can shoot, and though it deprives us of a Love/LeBron/Kyrie drama-fest, it makes more sense for the roster I’ve built so far.

Alex: I’ll take John Wall. He might be having the weakest season of any All-Star, but he’s obviously a great player, and his speed and explosiveness make him well-suited for a fast-paced exhibition.

Jay: This leaves me in an enviable position, with Lowry and Horford remaining, I get to decide whether LeBron’s squad ends up with another point or another big. I think another big is more redundant, and Lowry offers some shooting as well as some handling, should I need to go small at any point, so I’ll take Lowry with my final selection.

Alex: You may have tried to spite me, but with three point guards already on my roster, I’m content to take Horford — even if his skills (defense, efficiency, IQ) don’t necessarily translate to the All-Star Game.

And with that, our draft is complete. Here are the rosters:

Alex: Now we’ll wait until Thursday to find out how closely our picks aligned with Steph and LeBron’s (even though their draft order won’t be public). It should be fun to keep an eye on.

Jay: Just imagine if everyone plays hard! (They won’t, but just imagine.)

Alex: We can dream!