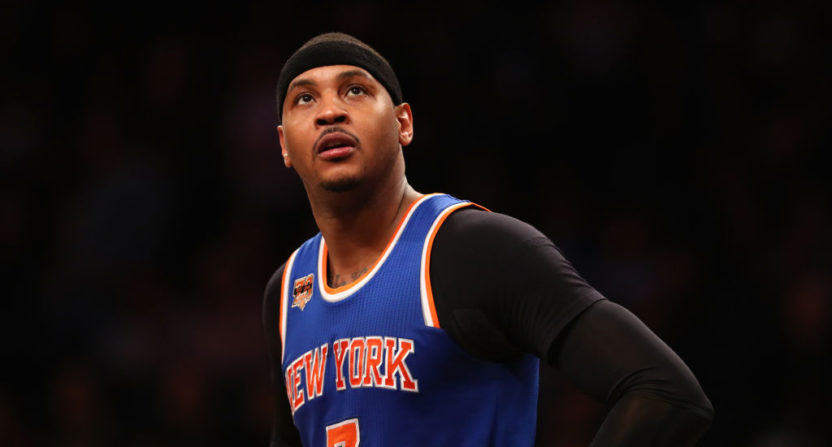 After a wild NBA offseason, the 2017-18 season is creeping up. ESPN and Sports Illustrated have been releasing their top players for the upcoming year, and they’ve managed to piss off a few of the NBA’s big names.

We need to start ranking these weak ass journalist. With descriptions of their strengths, weaknesses and ability to make up "sources"

If McCollum ever gets around to his list, hopefully Chris Broussard falls to the bottom.

Meanwhile, New York Knicks star Carmelo Anthony received the biggest snub, falling all the way to 64th in ESPN’s rankings— one spot behind Los Angeles Lakers rookie Lonzo Ball. As ESPN’s Chris Herring pointed out, that’s a huge slide for Anthony, who was a top 10 player in 2013 and still in the top 30 two years ago.

Anthony tagged ESPN in an Instagram post, telling the worldwide leader: “Don’t be so blatant with the disrespect.”

Can't Make Sense Out Of Non Sense! AS LONG AS I KNOW IM NICE, FUCK IT IM MY OWN FAN "A certain darkness is needed to see the stars." @Espn Don't be so Blatant with the disrespect #GoneToFar #LineEmUp STAYME7O

Last year, Anthony sent a similar message to Slam Magazine when he was ranked No. 15. As far as this year’s ESPN ranking goes, Melo could have a legitimate point. Sports Illustrated ranked him No. 37.

Toronto Raptors shooting guard DeMar DeRozan is another guy who’s felt disrespected in the past, so it’s no surprise he felt the same way this year. He was not a fan when Sports Illustrated ranked him No. 46 this time last year,

DeRozan was ranked behind Milwaukee Bucks guard Khris Middleton and San Antonio Spurs forward Lamarcus Aldridge. No disrespect to those guys, but I know I’d rather have DeRozan on my team any day. Remember, DeRozan averaged 27.3 points and was an All-NBA third team selection last season.