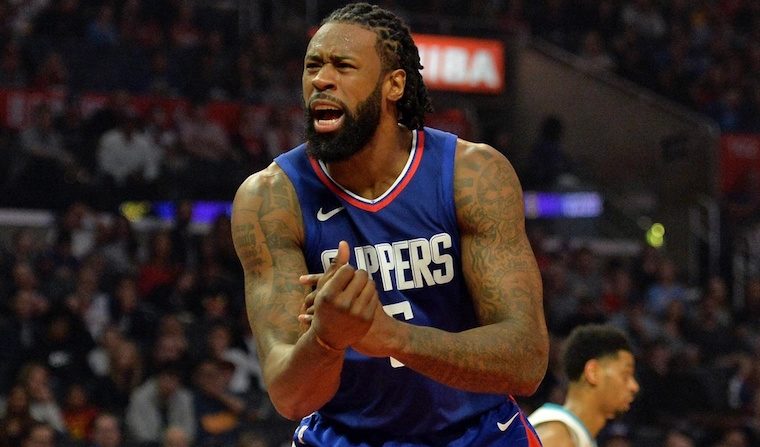 The Feb. 8 NBA trade deadline is exactly three weeks away — earlier this year than in the past to avoid the DeMarcus Cousins All-Star Game trade fiasco from a year ago — and we’re starting to see the usual uptick in rumors that comes with the trading season.

With the salary cap not expected to go up very much this summer, teams are a little more confined in what they can do than normal. But that won’t stop a lot of chatter from going on with some of the league’s marquee teams and players. Before discussing who could be dealt, we should first address who probably will not.

Despite a lot of talk about Anthony Davis and DeMarcus Cousins, don’t expect the New Orleans Pelicans to do anything but add at the deadline. NOLA is currently in a three-way tie for sixth in the West and was just awarded a $2.4 million disabled player exemption that it can use on a salary to help the Pelicans reach the playoffs for the first time since 2014-15.

In the debut of his New York Times newsletter, which you should all subscribe to, Marc Stein speculatively predicts that the Portland Trail Blazers will break up its terrific backcourt duo and trade guard C.J. McCollum, though not before the Feb. 8 deadline. Portland is the second of the three teams tied for sixth out west and we’re about to get to the other as we go through the big names who could be traded.

DeAndre Jordan: The Clippers are that third team tied for sixth in the Western Conference, and there is no shortage of suitors for the All-Star center, most notably the Milwaukee Bucks, Cleveland Cavaliers and perhaps the Houston Rockets. Since I wrote a column imploring the Clips to consider rebuilding, L.A. has gone 15-6 to climb back into the playoffs.

Jordan can be a free agent after this season, but there’s speculation that since the free agent market won’t be so robust this summer, Jordan will opt into the final year of his contract at $24.1 million and test free agency in July 2019. If the Clippers decide to punt on the playoffs this season and trade Jordan, which seems unlikely, Lou Williams’s value won’t get any higher than it’s at right now and they should ship him out as well.

Marc Gasol: Despite a 15-28 record, just 2.5 games ahead of Sacramento for the league’s worst record, the Memphis Grizzlies have seemingly no desire to go through a full rebuild and ride Gasol and Mike Conley until the end. The least the Grizzlies could and should do is offer up wing Tyreke Evans, who’s having a career year at age 28, averaging nearly 20 points, five rebounds and five assists per game. If sentimentality wasn’t involved, Gasol would be on the trading block today.

Los Angeles Lakers: It’s no secret that the Lakers want to clear cap space to make a run at LeBron James and Paul George (who Oklahoma City won’t likely be trading as long as it’s in the playoff race) in July. While clearing Luol Deng’s albatross of a contract will nearly be impossible, Jordan Clarkson, Julius Randle and Larry Nance Jr. are definitely on the block if it means being able to shed long-term salary.

Derrick Favors: With the Utah Jazz struggling mightily on offense (28th in points scored per game) after losing Gordon Hayward in free agency, Favors has drawn interest from teams looking for size, including the Cavs and possibly the Detroit Pistons. With the team out of playoff contention, Utah could look to make a few moves over the next three weeks.

Tristan Thompson: If the Cavs are going to make a move that apparently their star players think they need, Thompson is probably the player who needs to be sent out. The struggling big man has two more guaranteed years on his contract after this season for $36 million, so dealing him will be a tough sell without sweeteners. Cleveland has the Brooklyn Nets’ first-round pick, which will probably be a top-10 selection, and its own pick to try to entice teams to take on Thompson’s salary.

Nikola Mirotic: After missing the first quarter of the season because a Bulls teammate literally broke his face, Mirotic has been incredible in Chicago’s quasi-resurgence after a 3-20 start. Niko has averaged nearly 18 points and seven rebounds per game in the 20 games he’s played, and the Bulls are 13-7 in those contests. Chicago will likely expect a first-round pick for Mirotic and should get a good return based on how well he’s playing. Other Bulls like guard Jerian Grant, will also be on the block.

Sacramento Kings: Sacramento is finally going to really start playing the kids, while benching recently signed veterans. That means guards like George Hill and Garrett Temple will be on the block, along with big men Zach Randolph and Kosta Koufos. But the biggest name who could end up being dealt is Vince Carter, who’s on a one-year contract. A reunion with Toronto seems unlikely, given the Raptors’ luxury tax constraints, but how awesome would that be?

DeMarre Carroll— With the Brooklyn Nets still in asset-gathering mode and teams including Detroit in need of some scoring, the Nets could explore trading the veteran three-and-d wing. Other teams will have interest in point guard Spencer Dinwiddie and wingman Joe Harris.

General Manager Sean Marks hasn’t been afraid to pull the trigger on a deal if it means getting a potential long-term asset in return, and the $6 million disabled player exception Brooklyn was given on Wednesday means it could possibly swallow another mid-sized contract in order to obtain a desirable asset.

Justise Winslow— Winners of 15 of its last 20 games, the Miami Heat are up to fourth in the East, just a half-game behind Cleveland for third. With a ton of draft picks owed and minimal salary cap flexibility, there’s a chance that Winslow, still just 21 and the 10th pick in the 2015 draft, could be used as bait to try to improve the Heat roster. He just hasn’t shown signs of life on offense yet, and other teams could be willing to take a long-term look at him.

** Similar to Winslow, Detroit’s Stanley Johnson and Orlando’s Mario Hezonja could end up on other teams after disappointing starts to their careers. If the Pistons really want to improve at the deadline, they might have to deal rookie shooter Luke Kennard.

** If the New York Knicks fall out of playoff contention over the next couple of weeks, look for big man Kyle O’Quinn and wing Courtney Lee to draw interest.

** Nerlens Noel has been such a colossal disaster for Dallas this season, so maybe the Mavs just look to get rid of him in February after acquiring him at last year’s deadline.

** The Atlanta Hawks will be selling off parts as well, with center Dewayne Dedmon, forward Ersan Ilyasova and guards Kent Bazemore and Marco Belinelli as guys who can go.