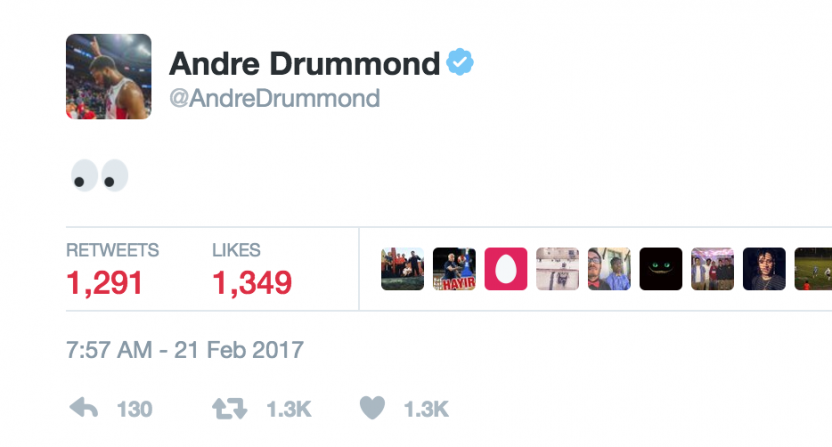 NBA trade rumors will be flying through the air with frequent flyer frequency over the next couple of days as we quickly approach the annual trade deadline. Nobody is safe, and the ears of NBA players around the league are burning nearly everywhere you look. With that being the case, players are keeping their eyes wide open, if their use of emojis is any indication.

If you follow NBA players on Twitter, then you know exactly what we are talking about. The use of the eyeball emoji seems to be picking up in frequency this week. Is it an indication these players are watching what is happening around the league and reacting without saying a word, or are they watching their names in the rumor mill or observing what is happening with their team? The use of a single emoji in a tweet leaves the door for interpretation wide open, which allows us only to speculate the reasoning and emotion behind the tweet.

One notable player making use of the eyeball emoji is Isaiah Thomas of the Boston Celtics, who has not been one to hold back about his opinions during the trade deadline madness.

Thomas has plenty to be mindful of as the Celtics look to possibly add a key piece to their roster in hopes of keeping their momentum going this season. The Celtics, currently in position for the second seed in the Eastern Conference playoff picture behind Cleveland, have been rumored to be in the mix to acquire Blake Griffin from the Clippers, which would likely mean the Celtics ship back a handful of players to Los Angeles. The Celtics has also been subjects of rumors about the Chicago Bulls and Jimmy Butler.

In Detroit, with the Pistons currently sitting in the eighth spot in the Eastern Conference, the need to improve the team or go in a full tank mode for a lottery pick needs to be decided now. That has the Pistons mentioned in a number of trade rumors that could see the team add a complimentary player to Andre Drummond. You better believe Drummond is watching to see what his team does to help him out on the court.

And while Thomas, Drummond and others might actually be signaling big trades to come, it’s also very possible they’re just messing with us.

Wifey: Are you staying up?

Me: Yeah. An NBA player tweeted the eyes emoji so everyone thinks a big trade could be coming.

In the next few days, we should see plenty more eye emojis filling our timeline. This is also a good opportunity to remember the best use of an emoji of all time by an NBA player.