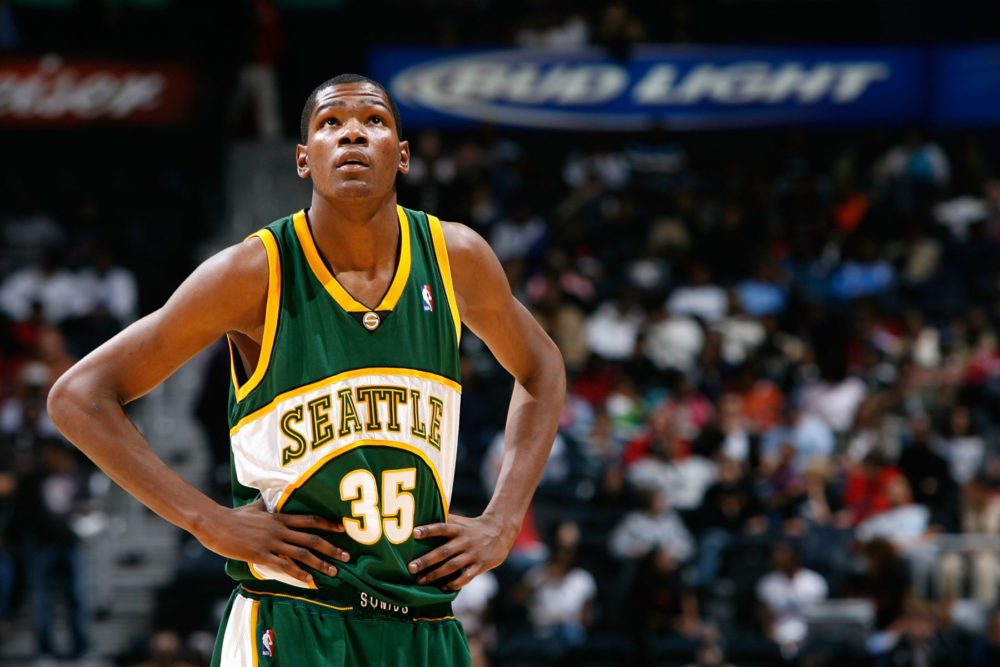 Somewhere, there exists an alternate universe in which the Seattle SuperSonics did not move to Oklahoma City, Kevin Durant won multiple MVP awards in the Emerald City, and he and Russell Westbrook still play together up by Puget Sound.

Of course, we do not live in that universe, and so Seattle fans must settle for the, um, next best thing: Durant returning to town as a member of the Golden State Warriors for an exhibition game on their home turf.

According to Ailene Voisin of the Sacramento Bee, the Warriors will face the Kings, who nearly moved to Seattle in 2013, on October 6 at KeyArena. It will be the NBA’s first game in Seattle since the Sonics left in 2008.

The exhibition is presumably intended to honor Seattle fans, but it could wind up torturing them. The poor folks will be left to marvel at the superstar who could have been theirs, as he takes on the team that nearly became theirs. Feelings will surely swirl at KeyArena that night. As the Seattle Pilot puts it…

On one hand, the idea of basketball-starved Seattle hosting an NBA game for the first time in more than a decade sounds like a great idea. On the other hand, bringing back Warriors star Kevin Durant, whom the Sonics drafted No. 2 overall in 2007 only to see him snatched away before blossoming into a star in Oklahoma City, seems a bit tone deaf.

And don’t get Seattle fans started on the Kings, who were nearly purchased by Steve Ballmer and Chris Hansen in 2013 with the hopes of turning the franchise into a reincarnated version of the Sonics. That purchase was eventually voted down by the league’s board of governors under what was generally agreed to be heavy anti-Seattle sentiment held by then-Commissioner David Stern.

In a way, it’s as if Seattle fans made a deal with the devil. They finally get NBA basketball in their hometown again, but when they watch they will be reminded at every moment of what they’re missing. It’s almost cruel.

Just this week, Durant was asked how he first reacted when the Sonics announced they would move to Oklahoma City. The All-Star was diplomatic (no need to anger OKC fans more than he already has) but said he loved playing in Seattle in front of Sonics fans.

Kevin Durant discusses what it was like to leave Seattle for OKC and gives some advice for the next generation of ballers pic.twitter.com/vp3yvodJYd

So how will Seattle fans react to the one that got away, the guy they adore so passionately in that alternate universe? We’ll find out soon enough.