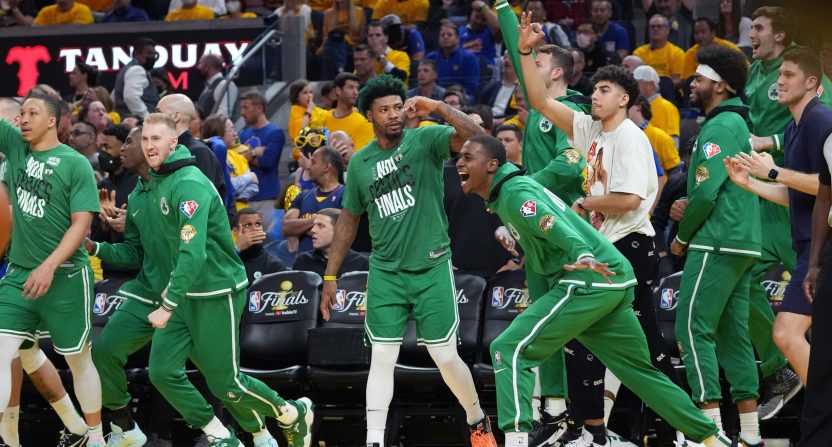 The Golden State Warriors looked in full control of Game 1 of the NBA Finals against the Boston Celtics, and then the fourth quarter happened.

The Celtics entered the fourth quarter trailing 92-80, and then they went on to outscore the Warriors 40-16 to close out a 120-118 road victory on Thursday night at Chase Center.

The incredible fourth quarter featured a 17-0 run, which began when the Celtics were trailing 103-100.

Al Horford nailed a three to give Boston a 106-103 lead with just over five minutes remaining (and drained another three on the ensuing possession).

Al Horford for the lead… CASH

Horford, 36, hit big shot after big shot down the stretch. He finished with a team-high 26 points, while doing so very efficiently, and with a career-high in three-pointers: 9-of-12 from the field, 6-of-8 on threes.

The ageless Al Horford is going off in the 4th quarter of Game 1 for the Celtics! pic.twitter.com/UTJYuUMvcZ

It’s the Warriors’ first home loss of the postseason, and it’s a huge opportunity blown. Game 2 should be viewed as a must-win for Steph Curry (who had 34 points) and company; trailing 2-0 in the series with three games (if necessary) still to come in Boston would look very unfavorable for the Warriors on the surface.

Game 2 of the NBA Finals will be Sunday evening in San Francisco.

Here’s a look at how the basketball world is reacting to the Celtics’ remarkable fourth quarter to win Game 1:

At one point vs. the Celtics, the Warriors had a 96.1% win probability in Game 1 👀 pic.twitter.com/micHqRsYEK

The point breakdown of that run:

At the start of the 4th quarter, the Boston Celtics trailed by 12. They ended up with a 12-point win.

The 24-point scoring margin in the 4th tied the largest in any quarter of a Finals game in NBA history. pic.twitter.com/TRKfln8zov

The Celtics are 8-2 on the road this playoffs. pic.twitter.com/zsBsK39zXA

The Boston Celtics went OFF in the 4th quarter ♨️ pic.twitter.com/JSFoOlDYUz

When the Celtics were down 2-1 in Milwaukee, they put up 43 in the 4th quarter in Game 4 to turn what looked like a series loss into a tied series. They haven’t lost two straight in these playoffs. Two Game 7 wins. Swept the Nets. This is an insane run.

The Celtics turned into the old Warriors in the 4th. What an outrageous shooting tsunami. Shocking run. Gonna need Draymond emergency pod on his performance and if he really was trying to break the backboard with shots. The people wanna know.

What a 4th quarter from the Celtics. Just brilliant.

The Celtics are the first team that isn't overwhelmed and intimidated by Steph's showboating, hotdogging and front-running. They just shrug and keep battling.