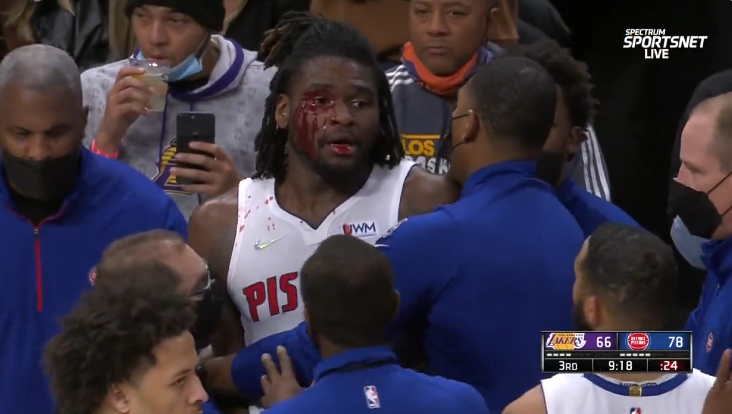 A wild scene broke out during the Lakers-Pistons game on Sunday night in Detroit at the end of a free throw attempt in the third quarter.

Detroit’s Isaiah Stewart was getting ready to get in position for a possible rebound (the shot was made, though), when he took a shot to the face from Los Angeles superstar LeBron James.

Stewart wasn’t happy about that, to say the least, and tried to go after LeBron — and perhaps the entire Lakers team — for a fight- despite being held back by numerous players and staffers all over the court. He was escorted to the tunnel, where he then sprinted towards the locker room. This was while having a considerable amount of blood around his right eye.

Replays showed that Stewart took a fist to the face from LeBron, and it didn’t exactly appear to be an inadvertent fist at that.

Here are some videos of the chaos:

The Lakers and Pistons had to be separated multiple times after this play between LeBron and Isaiah Stewart. pic.twitter.com/im0o7fXeoI

For those who didn't see, this is the shot LeBron took at Stewart that bloodied him up and sparked the scuffle. pic.twitter.com/HFrNG8PGI8

Stewart and James (assessed with a flagrant 2 foul) were each ejected. It’s the second career ejection for LeBron.

Here’s a sampling of how the NBA world reacted to the incident:

Oh the only way LeBron wins this fight is if he drops his bank account on Stewart https://t.co/KOZ13iXySM

The face says “I’m too rich to fight” pic.twitter.com/n88NCU5xoW

“Suspend everyone not named Lebron” pic.twitter.com/PWMhNaQ7Mo

I’m looking forward to reading the piece explaining what LeBron did was actually a way to motivate his teammates.

The Elbow will not help LeBron James' reputation or legacy.

Stewart, caught an elbow from LEBRON on a missed ft. They might toss Bron for that elbow. Don’t think he intentionally did it, but intent only matters to Bron. Stewart is still leaking.

stewart did the "I'm cool, I'm cool" fakeout then broke like four tackles

This is not cool man, Bron started this against Isaiah Stewart 😒 pic.twitter.com/KBIKuxCKlC

Isaiah Stewart looking for Lebron in the locker room pic.twitter.com/eZdVaknAuU

Lebron when Isaiah Stewart ran up on him 💀💀 pic.twitter.com/MeiVup96tx

The Lakers after LeBron got ejected pic.twitter.com/c6PvwmTl67