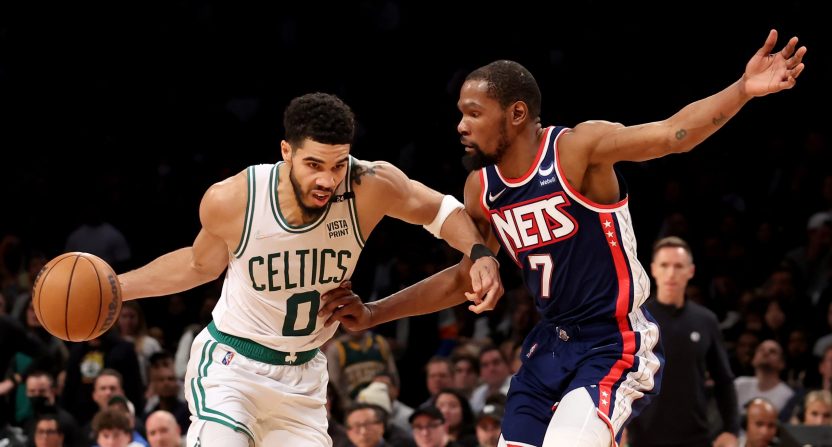 The Brooklyn Nets were NBA title favorites for much of the 2021-22 season, and even in February after the Ben Simmons-James Harden trade. So that makes it particularly eye-opening that the Nets, a team featuring superstars Kevin Durant and Kyrie Irving, didn’t win a single playoff game.

The Boston Celtics beat the Nets 116-112 in Game 4 on Monday night to complete a four-game sweep in the first round.

Jayson Tatum led the way for Boston with 29 points, but he fouled out with just over three minutes remaining on a very questionable call.

Celtics star Jayson Tatum fouls out in Game 4. Did the refs get this call right? 🏀 pic.twitter.com/21zLlpFgiZ

Durant scored 39 for Brooklyn but he was very inefficient from the field (13-of-31 from the field, 3-11 on threes). He went 10-of-11 from the charity stripe, but his one miss turned into a series-crushing sequence.

After Durant missed the second of two free throws with 22.2 seconds remaining, Boston went down to the other end and scored to take a 113-109 lead.

Kevin Durant misses a free throw and the Celtics score 2 points on the other end to go up 113-109 with 13.7 seconds remaining. 🏀 pic.twitter.com/M6che3RoEp

Irving had 20 points on 6-of-13 shooting for Brooklyn.

The Nets’ Nic Claxton had a record-breaking poor performance at the free-throw line, going 1-for-11 (he went 6-for-6 from the field, though).

The status of Simmons was a big topic of conversation entering this game (and all season), and it turns out he wasn’t even in attendance for Game 4.

As others have noted, Ben Simmons is not on Nets' bench tonight. I'm told he's not at the arena, because of his ongoing back issues.

So, this concludes a monumentally disappointing season for the Nets.

The Celtics, on the other hand, continue to play scorching-hot basketball and look like a legitimate NBA title threat. Barring a stunning series comeback by the Chicago Bulls, the Celtics will take on Giannis Antetokounmpo and the defending champion Milwaukee Bucks in the second round. That would be one of the best series (if not *the* best series) of the entire 2021-22 NBA postseason.

The basketball world has had plenty to say about Game 4 and the Celtics sweeping the Nets. Here are some examples:

"That was one of the worst officiated games I've ever seen."- Charles Barkley on Celtics-Nets Game 4 🏀 pic.twitter.com/mQeituZOiJ

This didn't age well for KD and the Nets 😅 pic.twitter.com/LaVTBMJPhM

The Nets are 1-8 in their last 9 playoff games dating back to Game 3 of the 2021 Eastern Conference Semifinals against the Bucks.

Jayson Tatum's 118 points are the most scored by a Celtics player in a 4-game sweep, breaking his own mark from the 2020 1st Round over the 76ers. pic.twitter.com/ZmGFwEsmxg

The Nets were the no. 1 title favorites before the season started.

They are the only team to be swept this playoffs. pic.twitter.com/5BHAwy4mlB

The Lakers and Nets seeing each other in Cancun pic.twitter.com/NZsCtrEyLj

*When people said the #Celtics should avoid the Nets* pic.twitter.com/KWf5QrS2nW

The Bulls won more playoff games than the Nets lol