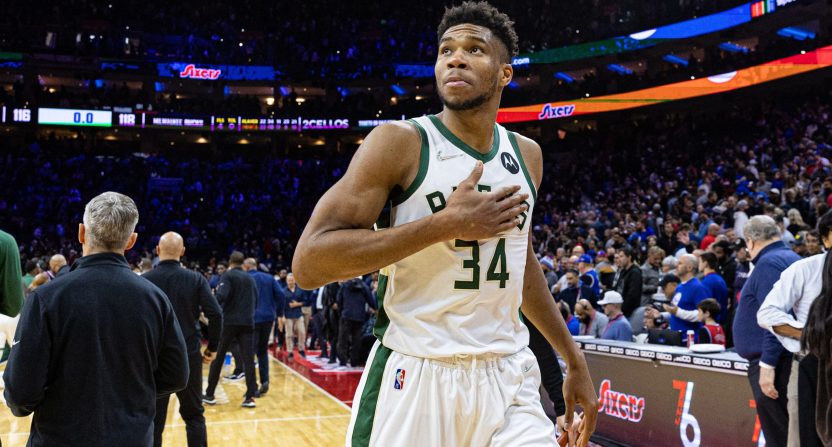 The Milwaukee Bucks came out on top 118-116 over the Philadelphia 76ers on Tuesday night, in a game with big Eastern Conference ramifications. With the win, Milwaukee moves up to the No. 2 seed, just a half-game behind the Miami Heat. And the Sixers fall from the No. 2 seed to the No. 4 seed, 1.5 games behind Miami. Yes- four teams are within 1.5 games of each other for the top-four seeds. It’s a wild race, and with only two weeks left in the regular season.

And the conclusion of this huge game between two Eastern Conference powers fittingly came down to a play between two of the NBA’s best players.

After recently-acquired star James Harden missed a three for the Sixers with Milwaukee leading 118-116 in the final seconds, Joel Embiid got the offensive rebound. But Embiid’s layup was rejected on a fantastic block by Milwaukee’s Giannis Antetokounmpo.

Initially, it was ruled goaltending on Antetokounmpo and a game-tying bucket for Embiid with 1.6 seconds remaining. But replays showed that it was a clean, legal block.

So, the two points were taken off the board, and Philadelphia didn’t have time to get off a shot after winning the ensuing jump-ball at half-court.

GIANNIS BLOCKS EMBIID TO WIN IT FOR THE BUCKS ‼️ pic.twitter.com/x2fyXpIEnW

Milwaukee outscored Philadelphia 67-55 in the second half — and 37-27 in the fourth quarter — to come away with the impressive road victory.

Along with making the defensive game-sealing play, Antetokounmpo led the way offensively for the Bucks. He scored 40 points (16-of-24 from the field), pulled down 14 rebounds, dished out six assists, and blocked three shots.

Here’s a look at how the NBA world reacted to The Greek Freak’s heroics and Milwaukee’s big win:

Giannis Antetokounmpo finished with at least 30+ points on 50% FG in his 7th straight road game, tied for the 2nd longest such streak in NBA history.

Only Wilt Chamberlain in 1961 had a longer such streak (9 games) pic.twitter.com/IKaDL9jQVA

The Greek Freak is up to 30 PTS through three quarters.

laughing is really my only emotion watching Giannis now. nothing surprises me anymore.

TNT aired yet another Lakers blowout instead of this game. https://t.co/EjgWhc3Fy7