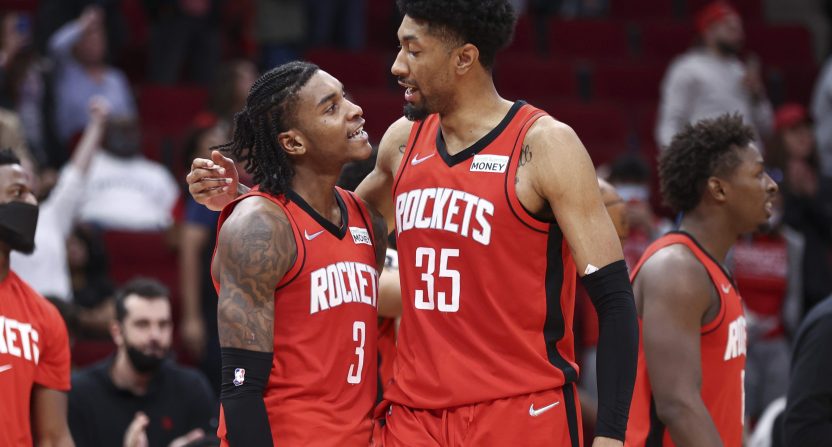 The Houston Rockets lost 124-111 to the Denver Nuggets on Saturday night at the Toyota Center, and the final score doesn’t even show just quite how ugly things got for the Rockets during the game. In fact, the turmoil got so bad that one Rockets player even left the arena mid-game.

Porter Jr. had a heated exchange with Lucas and proceeded to throw an object before leaving the arena at halftime, according to Charania.

Wood was reportedly benched to begin the game after missing a mandatory COVID testing window, and Lucas also called out Wood’s “effort level.” Wood then refused to enter the game in the second half.

Sources: After Rockets assistant John Lucas called out multiple players including Kevin Porter Jr. and Christian Wood at halftime tonight vs. Nuggets, Porter had a heated exchange with Lucas, threw an object and promptly left the arena – and Wood refused to sub into second half.

Sources: Wood was benched to start the loss to Denver after missing a mandatory COVID-19 testing window. Lucas called out entire team at halftime, and focused on Wood's effort level. Porter had a heated exchange with the longtime assistant, and drove out of arena at halftime. https://t.co/24oAwV2GqC

According to Adrian Wojnarowski and Tim McMahon of ESPN, “Porter became upset after assistant coach John Lucas challenged him, revisiting an issue that led to Porter losing his composure on the bench during the first half, sources said.”

“The Rockets announced during the second half that Porter was questionable to return due to his left thigh being evaluated. Porter has been bothered for weeks by a left thigh contusion, causing him to miss several games, but that was not the issue that led to his absence after halftime, according to sources.”

According to The Athletic’s Kelly Iko, the Rockets have spoken to Porter, and “he’s apologetic for the overreaction.”

Per a team source, the Rockets have since spoken to Porter Jr. since the halftime incident and he’s apologetic for the overreaction. https://t.co/nogc86tcqq

Porter, 21, entered Saturday night’s game averaging 13.0 points, 5.9 assists, 4.4 rebounds, and 1.3 steals on the season as Houston’s starting point guard. He was traded to Houston by the Cleveland Cavaliers last January after he had a locker room outburst (about his locker being moved).

So, Porter and Wood are very talented players, and it will be interesting to see how Houston handles this situation.

Here’s a look at how the NBA world has reacted to the Rockets’ drama:

John Lucas is one of the most balanced and positive individuals I have known. I know for a fact he has praised those two a ton and now they can’t handle hardcore criticism in front of their peers when he had something to say! Those two better get apologies in order quickly! https://t.co/xfty23BEKU

1. Wood is likely not a part of HOU’s future & will probably get traded

2. KPJ was acquired with a fake pick as a development project. So if he doesn’t work out, that’s fine

3. The #Rockets future is JG, Sengun, Tate, future lotto picks and the other young guys https://t.co/M2bOUecGFe

Rockets fans have been through it all

So Wood breaks a team rule and gets benched and then KPJ buggers off at half time after losing his temper. Awesome stuff.

John Lucas is gonna let KPJ cool off and they'll smooth things over. I'm not too worried about that right now unless something else happens. This is his first incident in Houston, losing+emotions finally came to a boil.

Wood's effort level has been a problem all season though.

Massively talented, but dude has stuff he needs to work out https://t.co/oLKm8BZM4n

I'm definitely giving up on the idea of getting legit value for Wood in a trade.

Still not giving up on the KPJ dream. But it's looking rough man

KPJ gonna be hooping in Kazakhstan if he keeps this up. https://t.co/AQMItqDzal

We entered this season with literally no expectations, and yet somehow someway I have been disappointed by Houston Rockets basketball. https://t.co/USUCB8XsTB