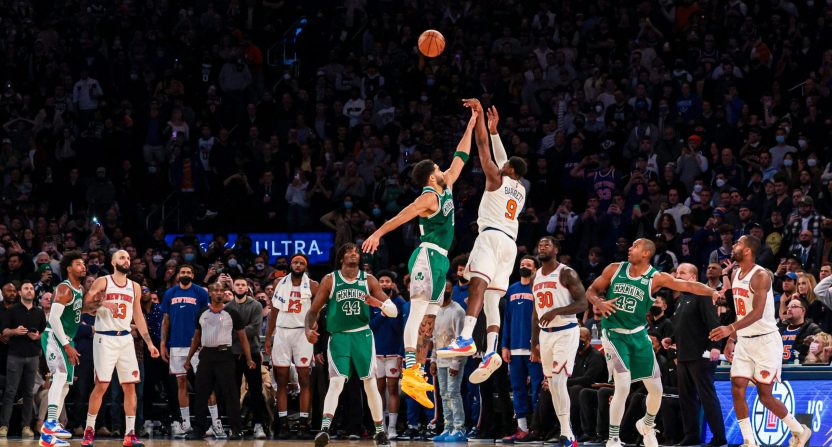 The New York Knicks made a ridiculous 25-point comeback to beat the 108-105 Boston Celtics on Thursday night at Madison Square Garden, and they closed out the comeback in amazing fashion.

With the game tied 105-105 and 1.5 seconds remaining, New York’s RJ Barrett nailed a banked in a crazy buzzer-beating three for the Knicks win. The game-winning shot came after Boston’s Jayson Tatum — who had 36 points — nailed a jumper to tie the game.

While Barrett produced the big highlight that will be remembered by Knicks fans for years to come, Evan Fournier was the star of the game.

Fournier went off for a career-high 41 points, topping his previous career-high of 32 points. He also tied a Knicks franchise record — held by J.R. Smith — of 10 three-pointers. This also happened against the team he played for last season, continuing his dominance against his former team in the 2021-22 campaign.

This loss summarizes how things are going for the 18-21 Celtics this season, and the Knicks (19-20) are playing better basketball after a 12-16 start.

Here’s a look at how the NBA world has reacted to the Knicks’ comeback, the Celtics’ collapse, and Fournier’s career-best performance:

Entering the day, teams were 1-138 when facing a deficit of 25+ points this season (Knicks trailed by as many as 25 points tonight).

Only the Thunder have overcome a 25-point deficit this season (trailed by 26 and beat the Lakers on Oct. 27, 2021. pic.twitter.com/BoBV2JFjiC

The Celtics join the Pelicans as the only teams to lose 4 games in which they led by at least 15 Pts this season (Celtics led by as many as 25 on Thursday).

The Celtics has lost 6 of their last 7 games that went to clutch time (score within 5 points in last 5 minutes of game). pic.twitter.com/ZlfY3cNvSS

The Knicks overcame a 25-point deficit in the win against Boston. This is the franchise’s largest comeback victory since Mar. 14, 2004 at MIL (trailed by 26).

Fadeaway bank shot to win from a guy shooting 23% from the floor. Time to defund the Celtics

The Celtics have found so many different ways to puke all over themselves this season.

Evan Fournier has now scored 105 points against Boston alone in just three games.
He now has 514 total points scored this season.
That means 20.4% of Fournier’s entire 2021-2022 scoring has come in three games against the Celtics.