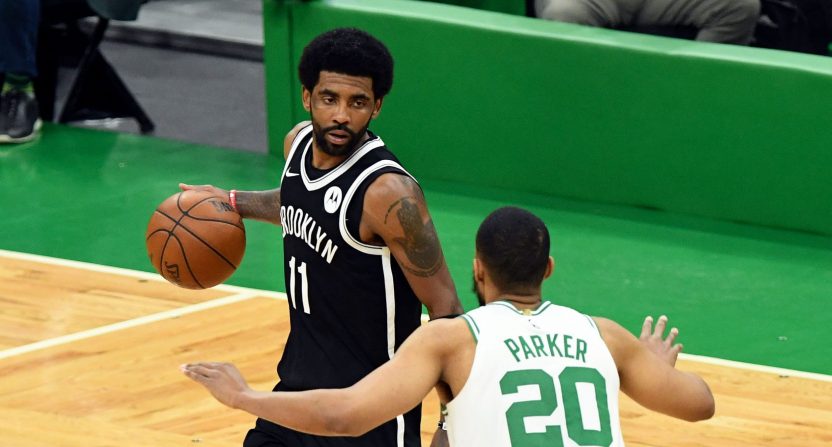 One of the biggest storylines heading into the 2021-2022 NBA season is whether or not Kyrie Irving will suit up for the Brooklyn Nets. At the moment it doesn’t look good considering the team has announced that Irving will not be allowed to participate as a part-time player.

Given the evolving nature of the situation and after thorough deliberation, we have decided Kyrie Irving will not play or practice with the team until he is eligible to be a full participant. Kyrie has made a personal choice, and we respect his individual right to choose. Currently, the choice restricts his ability to be a full-time member of the team, and we will not permit any member of our team to participate with part-time availability.

While teammates like James Harden have voiced support for Irving, it’s clear that he feels like something has to change before he can return, though the specifics around his needs remained hazy. Irving went on to Instagram Live on Wednesday night to discuss the situation and ended up confirming a lot.

One of the biggest things was that Irving confirmed for the first time that he is unvaccinated, though that was widely assumed. Irving also said that he will not be retiring because of this. Third, Irving claims he was promised an exemption from being required to get a COVID vaccine.

“It’s reality that, you know, in order to be in New York City, in order to be on a team, I have to be vaccinated,” Irving said. “I chose to be unvaccinated, and that was my choice. And I would ask y’all just to respect that choice, and I am gonna just continue to stay in shape, be ready to play, be ready to rock out with my teammates, and just be part of this whole thing.”

“What would you do if you felt uncomfortable going into the season when you were promised that you have exemptions or that you didn’t have to be forced to get the vaccine? This wasn’t an issue before the season started,” Irving said. “This wasn’t something that I foresaw coming where I prepared for it and had a chance to strategize on what was going to be best for me and my family.”

“And no I’m not retiring and no I’m not leaving this game like this,” Irving said. “There’s still so much more work to do and there’s still so many other youngins to inspire. Because I know they want to be better than me. And I can’t wait to play against all y’all on this stage.”

While Irving clarified a lot of things and made it clear where he stands, many people on social media continued to push back against his views and ideas about the vaccine, including Stephen A. Smith.

Kyrie Irving on Instagram live right now: “I am not going to be used as some tool to further this agenda…”

Listening to Kyrie Irving on IG Live right now I'm confronted with the fact that we've raised a generation of folks who think contrarianism equals intellectualism and we're too far deep for them to understand the difference.

The NBA season tips on October 19 so there isn’t that much time between then and now for things to change. We’ll see if the Nets budge on their vaccine requirements or if Irving decides it’s better to act collectively for the good of the whole.