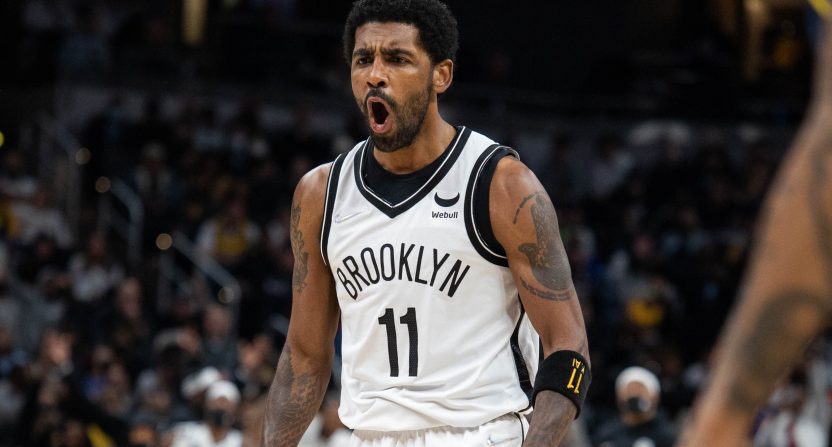 Kyrie Irving made his season debut for the Brooklyn Nets on Wednesday night after sitting out Brooklyn’s first 35 games of the 2021-22 NBA season due to being unvaccinated for COVID-19. Irving isn’t eligible to play home games for Brooklyn because of New York’s vaccination mandate, but head coach Steve Nash and the Nets are now — in a recent change of plans — allowing the point guard to participate as a part-time player.

While the Irving situation will continue to be a controversial story, there’s no doubting the seven-time All-Star’s basketball ability- and he didn’t take long to put the skills on display in his return to game action.

Irving scored 22 points (9-of-17 from the field, 4-of-4 at the charity stripe), dished out four assists, pulled down three rebounds, and swiped a game-high three steals in Brooklyn’s 129-121 comeback victory over the Indiana Pacers (stealing the spotlight from Lance Stephenson). He really turned it on late to help the comeback effort (Brooklyn trailed by as many as 19 points), scoring 10 points in the Nets’ dominant — 35-20 — fourth quarter. And he ended the third quarter in dramatic fashion with a buzzer-beating jumper to get Brooklyn within seven points.

So, that’s a pretty successful return that the Nets have to be very happy about- and the win snapped their three-game losing streak. Brooklyn has two home games up next (beginning with a showdown against the Milwaukee Bucks on Friday), so Irving won’t play again until next Monday on the road against the Portland Trail Blazers.

Here’s a sampling of how the hoops world reacted to Irving’s return:

"The game of basketball is happy to have him back" – Kevin Durant on Kyrie Irving's return tonight pic.twitter.com/EuOTqLHOLQ

Kyrie finally got it going vs the COVID-wracked Pacers and put on a Globetrotter exhibition of slick trick shots. No threes but 22 points as the Nets flexed and roared back to win by 12. Teammates appeared ecstatic to have their road warrior back. This is now the team to beat.

Kevin Durant on Kyrie: "That's how you play when you're elite at everything on the basketball court."

Kyrie Irving. What a showman.

Kyrie came back from binge watching HBO shows and took over the 4th quarter, league is in trouble.

Kyrie Irving reintroducing us to his bag… pic.twitter.com/XuCXvn0Alp