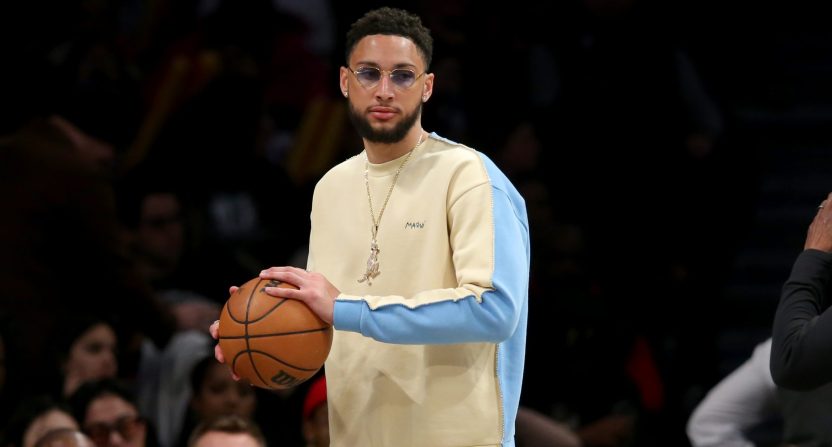 Despite having a back injury that has sidelined him the entire regular season, the Brooklyn Nets traded for Ben Simmons while James Harden went to the Philadelphia 76ers. Harden has been playing for the Sixers but Simmons has been on the Nets’ bench all this time.

That might change and according to The Athletic’s Shams Charania, there’s a chance Simmons could return in the first round of the NBA playoffs. That is, if the Nets qualify via the Play-In Tournament.

Simmons and the Nets have been managing his back issue and have been on same page, and should he continue clearing ramp-up hurdles, he will be able to return — yes, in the playoffs. https://t.co/sr7l5mEZ2h

While Shams’ report seems to keep things hopeful for Nets fans, head coach Steve Nash put cold water on the report when he revealed that, “There’s no timetable for [Simmons’] return right now.”

Steve Nash on Ben Simmons: “There’s no timetable for his return right now.”

Will Ben Simmons be healthy for the playoffs? That’s anybody’s guess. Even insiders like Shams probably aren’t 100% sure. It’s like a basketball version of Schrödinger’s Cat. Either way, it’s got many discussing the reacting to the report.

Ben coming back in the playoffs when the last we saw of him was his playoff blunder, is certainly something.

I hope for his sake he plays well because Twitter will have a damn field day https://t.co/QMfUEwW8sx

Ben Simmons first game back is in a playoff atmosphere https://t.co/EsILjIlZNM pic.twitter.com/VbOXREubAc

The first round of the NBA Playoffs start on April 16. That’s six days away. https://t.co/aR9YluxSMI