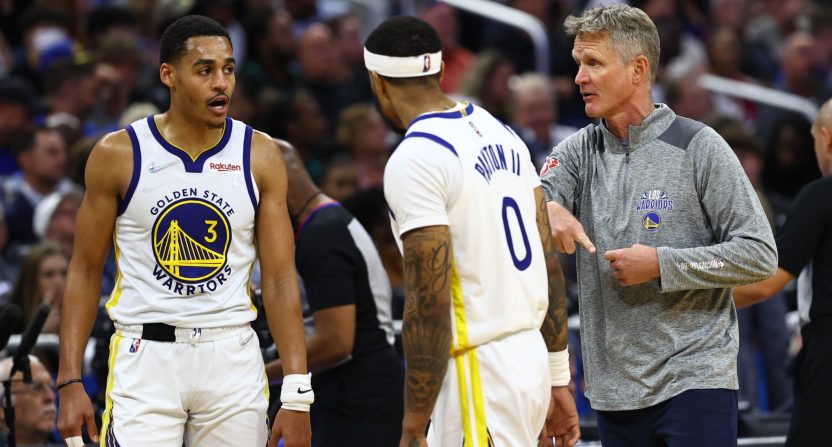 Tuesday night against the Orlando Magic seemed like a great opportunity for the Golden State Warriors to right the ship after losing two straight. It didn’t happen.

Orlando entered the game at 19-53, which was tied for the worst record in the Eastern Conference. Between that and the blown lead, the reaction of the NBA world was not kind to the Warriors.

Even Golden State’s own Twitter page did little to spin the loss.

The reaction elsewhere was much worse.

Unbelievably embarrassing loss for the Warriors. Pathetic performance against a team trying to tank. Wiggins is playing his worst basketball since the trade. It’s all bad right now.

This is just bad basketball by the Warriors

The #Warriors should be embarrassed by that effort. They’re a mess.

Warriors sink to new low: Score 90 points – 16 in the fourth quarter – against rebuilding Magic. Lose by four.
Fell behind early, played uphill, caught up, gave it back.

Honestly can’t remember the last time the Warriors successfully executed in the final minutes of a close game.

Of course, it can’t be ignored that the Warriors were without Steph Curry. While he’s expected to be back for the playoffs, the two-time league MVP will miss most (if not all) of the rest of the regular season. His immense value was a talking point following the loss in Orlando.

The Warriors offense is so cooked without Steph my god 💀

Keep cracking jokes about his gravity though.

Warriors are now 2-6 this season without Stephen Curry. They are 45-19 when he plays.

3 of the 6 losses came against non playoff/play-in teams.

So last season and this season to date, they are:

Of course, some of Golden State’s struggles pre-date Curry’s injury.

The Warriors are 6-12 in their last 18 games. Only 4 teams have more losses than them in that span. pic.twitter.com/qw3m4tfPOm

The #Warriors aren’t fully healthy, but their issues go beyond health issues. This team is loaded with talent and are having trouble separating from the Spurs and Magic? pic.twitter.com/Es8mperlpt

Even without Steph, Warriors had two of their most winnable games against the Spurs and Magic… and they lost them both.

More of a concern is how they lost them: poor execution and poor process. Just can’t be having those kinds of problems with the playoffs looming.

Even after Tuesday’s loss, the Warriors are 47-25 and sit as the No. 3 seed in the Western Conference. From that perspective, things are still OK. But they need to make up two games on the Memphis Grizzlies to get to the No. 2 seed and have home-court advantage in a potential second-round playoff series between the two. Furthermore, following the loss, Golden State is only two games ahead of the Utah Jazz and three ahead of the Dallas Mavericks.

The playoffs will undoubtedly include the Warriors. But for the sake of their seeding, things need to get better quickly.