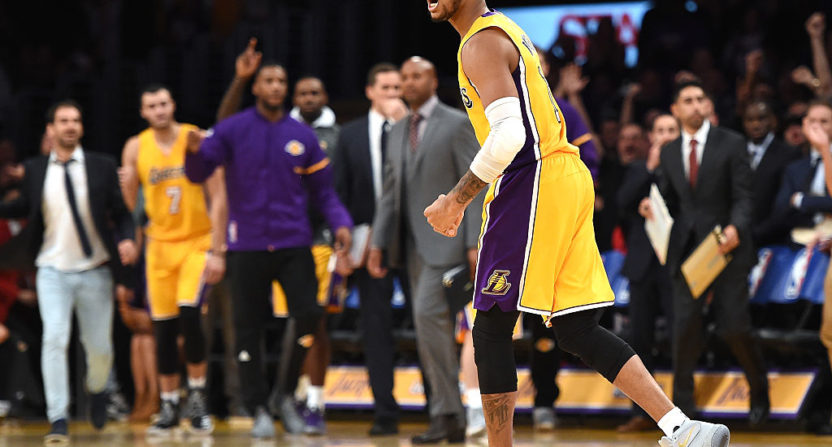 Adrian Wojnarowski of Yahoo’s The Vertical reported the Nets acquired D’Angelo Russell and the bloated contract of Timofey Mozgov in exchange for Brook Lopez and the 27th pick in Thursday’s NBA Draft.

To make a deal possible, Brooklyn had to take on all of the remaining $48 million owed to Mozgov, while dealing one of their two first-round picks in this week’s draft, plus their previous face of the franchise in Lopez. In dealing Lopez, the Nets essentially took on a salary dump to get Russell.

Russell is a 21-year-old combo guard, who averaged 15.6 points, 4.8 assists while shooting 35 percent from the three. Regardless of the Lakers awfulness, Russell’s scoring prowess at his age suggests unlocked potential. Now, how does someone that young and overlooked get dealt in a salary dump?

Well, Russell never recovered in L.A. after accidentally recording teammate Nick Young talking about cheating his then-fiancee. The incident overshadowed his on-court skills – which is just fine by the Nets who got him on the metaphorical cheap.

Brooklyn is flush with cash to spend, so taking on Mozgov’s deal isn’t a huge deal. Getting Russell is. At the one, the Nets weren’t ripe with depth. Free agent signee Jeremy Lin battled injuries, meaning second-rounder Isaiah Whitehead and D-League pickup Spencer Dinwiddie handled the bulk of the load. Adding Russell gives Brooklyn a backcourt piece that will stay in Brooklyn beyond the massive rebuild – that’s huge.

Further adding to Marks’ genius stroke is the fact he couldn’t even get a first-round pick for Lopez’s expiring contract (after this year) last season. Getting Russell? Damn.

Marks has worked hard to turn water into wine in Brooklyn. Last summer, he aggressively offer-sheeted restricted free agents in hopes of poaching young talent. It didn’t work out, but it’s a sound strategy to duplicate this offseason. Meanwhile, Marks dumpster dived to bring in some intriguing talent. His first signing as GM, Sean Kilpatrick, turned out to be a legit rotation shooting guard. Scrapheap pickups Joe Harris, Justin Hamilton, K.J. McDaniels and Archie Goodwin — at the very least — can play in the NBA. Throw in 2016 first-round pick Caris Levert, and the Nets, while still stinking, have something going.

Young reclamation projects with serious talent are a scarce commodity in the NBA. Grabbing Russell at 50 cents on the dollar is exactly the shrewd move Marks and the Nets need to make to regain relevance. Will he swing the balance for Brooklyn becoming a contender? Not right away. But it’s a move which should pay huge dividends going forward. How the Nets proceed this offseason will be fascinating.