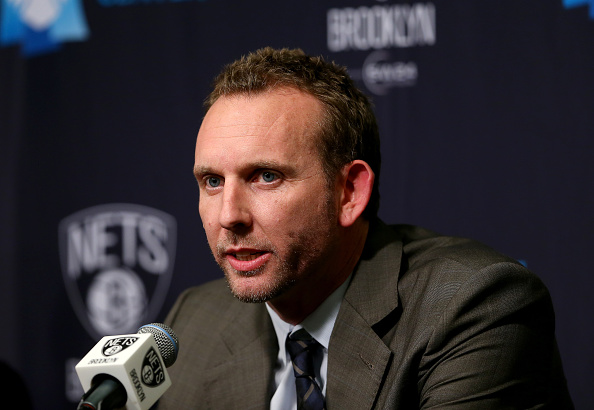 Sean Marks had one of the tallest tasks of the offseason, taking over as general manager of the Brooklyn Nets. The former Spurs assistant GM joined an entirely different situation.

The Nets didn’t have top draft picks (the previous regime mortgaged the future for short term gain) and outside of Brook Lopez, the returning roster didn’t offer much. The rookie GM had to be aggressive in the offseason to revitalize a quickly fading franchise.

Marks was active right away, trading Thaddeus Young to the Pacers for a first-round pick, later used to draft Michigan shooting guard Caris Levert. He then traded up in the second round to grab Seton Hall combo guard Isaiah Whitehead.

Approaching free agency, Marks was uber-aggressive in his efforts to bring young talent to Brooklyn. He was quick to throw a four-year, $75 million offer at restricted free agent Allen Crabbe and another four-year, $50 million contract at combo guard Tyler Johnson. The Nets were armed with an abundance of cap space, and if Marks didn’t have the assets to bring in potential young impact players, gambling with offer sheets was a smart alternative.

Crabbe, 24, was fantastic in a bench role for the Blazers as an athletic wing, who can defend and spread the floor. Johnson, 24,  has dealt with injuries since joining the Heat, but the combo guard possesses great athleticism and can shoot the ball. Both players are young with intriguing potential. The offer sheets were large, but for the Nets, it was the reasonable price to pay to acquire talent without surrendering assets.

Marks’ plan was smart. Unfortunately, as is the risk with offer sheets, both were matched.

Adrian Wojnarowski reported the Heat matched Johnson’s contract on Sunday. Before Dwyane Wade left Miami for Chicago, it seemed unlikely the Heat would match Johnson’s offer sheet. But once Wade left, there was suddenly both roster and cap space for Johnson, and the Heat decided to retain him. Portland matching Crabbe is fairly surprising. The Trail Blazers have already given a $70 million contract to wing Evan Turner, signed Festus Ezeli and re-signed Meyers Leonard to a $40 million contract. Crabbe was an important depth player, but at that price, it seemed Portland was priced out. Apparently not.

With no Johnson or Crabbe, the Nets roster is still a work in progress. Adding LeVert and Whitehead injects some much-needed homegrown youth. Signing Jeremy Lin and, to a lesser extent, Trevor Booker, will bring two vets who can consistently contribute. Lopez, when healthy, is an elite center offensively. There are also tangible pieces on the roster such as Rondae Hollis-Jefferson, Bojan Bogdanovic, and Sean Kilpatrick. The club inked formerly productive point guard Greivis Vasquez to a one-year deal on Sunday as well. Marks is also looking at Anthony Bennett, who is still young enough at 23 to turn his career around. Still, that’s not a highly competitive group.

Marks still has plenty of work to do. But he’s got $36 million in cap room, and can continue to be aggressive. Dion Waiters, Donatas Motiejunas, Tyler Zeller, Moe Harkless and Miles Plumlee are available on the restricted market, and with teams filling up their cap space, Marks should continue to be vigilant and creative in his willingness to exploit the market.

The Nets aren’t going to turn around their fate anytime soon. The old management team gutted the roster in a misguided effort to win instantly, an effort that never had a prayer of succeeding. But with Marks in charge, Brooklyn appears to be on the right track, making aggressive moves like the offer sheets to Crabbe and Johnson. Those are the exact moves the Nets should be making given their situation, and it must be comforting for fans to have faith that their team will actually make those moves. With a competent GM now in charge of the roster, there’s light at the end of the tunnel.