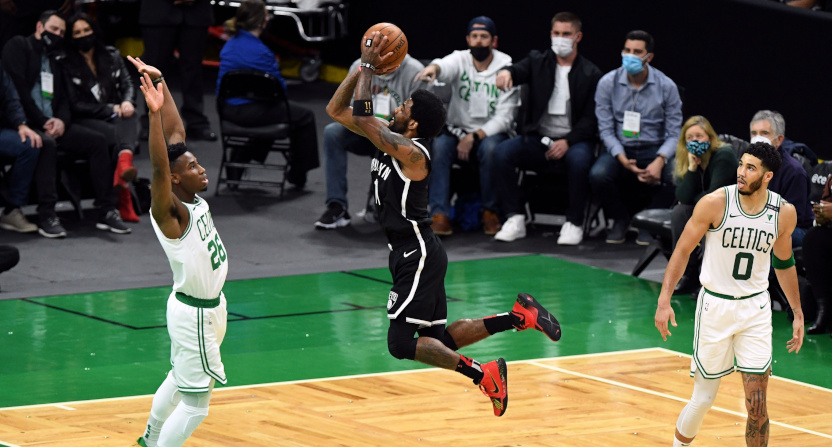 The Brooklyn Nets are now within one game of advancing to the second round of the NBA playoffs. The second-seeded Nets won games one and two against the seventh-seeded Boston Celtics at home, but fell 125-119 on the road Friday. On Sunday, though, they picked up a big 141-126 road win to go up 3-1 in the series, setting a team playoff record for points scored along the way. And huge performances from their top trio of Kevin Durant, Kyrie Irving, and James Harden were key to that victory.

Durant put up 42 points and made 14 of 20 (70 percent) of his shots from the field Sunday, including connecting on all three of his three-point attempts. He also added five assists and four rebounds, and notched his second straight game with more than 30 points (he had 39 on Friday). Irving (seen above going for a shot against Aaron Nesmith) recorded 39 points and 11 rebounds, knocking down 11 of 24 (45.8 percent) shots from the field and six of 12 (50 percent) from deep. Meanwhile, James Harden racked up 23 points, 18 rebounds and five assists. That trio is key to the Nets’ hopes this postseason, and they certainly were impressive Sunday. Here are some of those highlights:

The Nets only led 34-33 after the first quarter, but expanded that lead to 73-60 by the half. They never looked back from there, leading 112-91 at the end of the third quarter. 59 of Brooklyn’s 73 first-half points (80.8 percent) came from that trio of Durant, Irving and Harden, as did 45 of their 68 second-half points (66.8 per cent). So they did a whole lot of the scoring here, and showed off just how dominant they can be as a group. We’ll see if that continues in Game 5 in Brooklyn Tuesday.