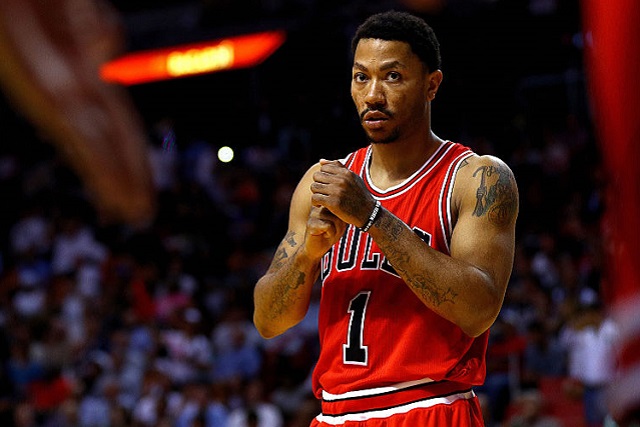 The New York Knicks and Chicago Bulls shook the NBA world Wednesday when it was announced by The Vertical’s Adrian Wojnarowski that Derrick Rose had been traded in a five-player deal.

The deal in its totality sent Derrick Rose, Justin Holiday, and a 2017 second-round pick to New York for Robin Lopez, Jose Calderon, and Jerian Grant. It’s not surprising that the Knicks went out and acquired a point guard, something that they haven’t really had for quite some time. But there wasn’t much of a market for Derrick Rose, and it seems they gave up a lot when his contract was set to expire next season.

Robin Lopez was the team’s marquee signing in free agency last season, and Jerian Grant was their top draft pick from last season, something that they don’t have for yet another year. Giving up both of those for a battered version of the once otherworldly Derrick Rose — who will certainly be looking for a nice contract when he becomes a free agent in 2017 — seems a tad steep, but time will tell.

Rose’s injuries over the course of his career are well-documented, and his fit is an interesting one in New York, to say the least. He’s not the same player he once was, but still put up 16.4 points, 4.7 assists, and 3.4 rebounds in 66 games for the Bulls last season. Rose is likely better than any point guard the Knicks would have gotten in free agency, and they will now have free reign to go after more prominent shooting guards and centers. Their odds of landing better players at those positions in free agency is much higher, which might explain why the team was willing to give up what they did.

Something that might be a slight concern in the whole ordeal, is the development of Kristaps Porzingis.

Porzingis appears to be the future of the Knicks franchise, after an exciting rookie season. Right now, with an aging Carmelo Anthony, and now Derrick Rose on the roster, that likely leaves Porzingis as the third option, assuming Rose will still get his shots. One might imagine that the Knicks would want to do what they could to ensure that everything was being done to help Porzingis develop. That’s not to say the Knicks won’t be able to operate with a trio of Anthony-Porzingis-Rose. But at first glance, it doesn’t seem ideal for that scenario, but rather a win-now mentality.

The Knicks will now have to look to replace Robin Lopez, which as I mentioned before, is fine. The first name that comes to mind for me is Pau Gasol. He’s obviously got a relationship with Phil Jackson going back to their days with the Los Angeles Lakers, and he’s familiar with Derrick Rose, having been his teammate the past two seasons.

Joakim Noah will be another name thrown around as a possible piece at center. Noah is a guy who isn’t going to need the ball on offense. He will play great defense, and will get you rebounds. With the Knicks roster as it’s currently constructed right now, that doesn’t sound like a terrible idea. Noah has always brought tons on energy to the floor, and the Knicks don’t really have a guy like that. So why not Noah?

I would be crazy not to mention Dwight Howard here as well. He’s going to be one of the most talked about pieces at center in free agency this offseason, and the Knicks have a decent amount of cap room despite taking on Rose’s contract. With Arron Afflalo and Derrick Williams declining player options, the team could have $30 million or more in cap space. Like Rose, Howard could probably use a change of scenery, but New York — as we all know — is a different beast. Los Angeles didn’t quite work out for Howard, but you also have to acknowledge that was a much different situation.

Overall, the Knicks got better at the point guard position, and will have their opportunities to improve in free agency where they need to. They might not contend at the top of the Eastern Conference, but at the very least, they’ll certainly be fun to watch.