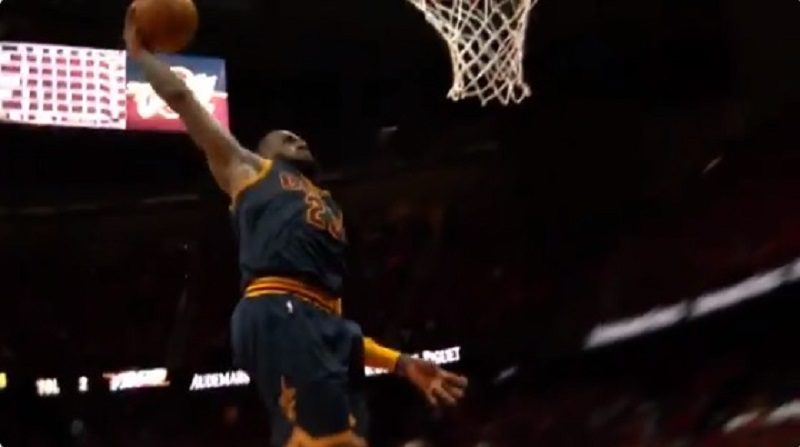 Nike is one of the biggest sporting goods company in the world. Part of the reason why is it’s lengthy list of terrific athletes sporting the swoosh: LeBron James, Rory McIlroy, Cristiano Ronaldo, Wayne Rooney, the University of Oregon, Neymar, Kobe Bryant, Kevin Durant, Mike Trout, and Michael Jordan, among many others.

With their wealth of talent on the field, Nike is able to make terrific advertisements for their players. Here’s two classic ads for Rory McIlroy featuring another client in Tiger Woods.

From golf to basketball, Nike loves to spotlight athletes in the best way possible.

And don’t forget about their brilliant Derek Jeter ad.

Whenever Nike releases an ad, it typically receives heaps of praise for its boldness and creativity. No matter who Nike focuses on, it always seems to create the perfect commercial. The same can be said today as Nike just released another ad for LeBron James, this time marking his 15th professional season.

The concept is so simple: LeBron James is a fantastic basketball player (maybe the best ever), but people love to criticize him. With great narration by Idris Elba, Nike tells this story within the context of the last couple seasons – and in just 58 seconds.

Moreover, what this ad does is proves once again that Nike can’t be beat when it comes to player-centric ads.

Adidas, Under Armour, and others have tried, but none come close to Nike. Just look specifically at the Jeter ad posted above. Nike was able to bring Jay-Z, Billy Crystal, and Spike Lee into the fold for their ad, in addition to Phil Jackson, Jeanie Buss, Tiger Woods, Jon Lester, and Jeter himself from the sports world. There are few words in the ad at all, but when it was released, people talked about it for days because of how it told the story of Jeter’s career. The shortstop is respected far and wide for his contributions to the game.

Nike was able to use this non verbal storytelling in the Rory McIlroy ad as well. While there were more words in that advertisement for Rory, the words themselves weren’t needed to tell the story of how this young boy from the United Kingdom grew up watching Tiger Woods only to be better than golf at him.

Now we arrive at the most recent Season 15 LeBron commercial.

Instead of going the non verbal route like it did with Jeter and McIlroy, Nike uses Idris Elba to tell the story of everything the greatest player in the NBA went through the last few years.

“Oh no. No… no… why do they go and poke the bear? Why do they try to set fire on fire? Do they know what happens now? Do they even think about that? No, to smart for that. To smart for that. Now they are living on borrowed time. Now is the season of their discontent. Wait, what is that sound? The tiny tiny sound. Oh I know what it is it’s the sucking sound of all hopes and dreams exiting the stadium and then BOOM… BOOM! BOOM! It don’t stop! Boom… boom… relentless, overwhelming, unforgiving, oh come on that is sick. That’s their future now and I’d feel sorry for them if it wasn’t going to be so much damn fun to watch.”

Another thing that stands out about Nike’s ads, as evidenced by this LeBron one, is that when they do use actors like Elba or the players themselves to talk in the ads, they aren’t referencing stats to tell the story most of the time. Elba doesn’t mention LeBron’s MVPs or points per game numbers. Instead, he tells the story of someone who is doubted and then, at the maximum level of doubt, explodes and ruins his opponent.

In a way, if you replace the word stadium with forest or desert, this ad could instead be about an animal or a soldier. But it’s not, it’s about LeBron.

Nike did the same thing nearly a year ago on October 25th, when they released another ad for LeBron telling the story of how he went from Akron to the NBA.

Out of context, one could probably assume that ad was about basketball as it referenced the game a little more than this year’s commercial, but at the same time it can be applied to real life non basketball scenarios as well.

To put it in simple words, Nike takes a small idea and expands it in a way that no other sports company has been able to do as well. Gatorade has gotten close, and Adidas and Under Armour have tried, but Nike stands alone.