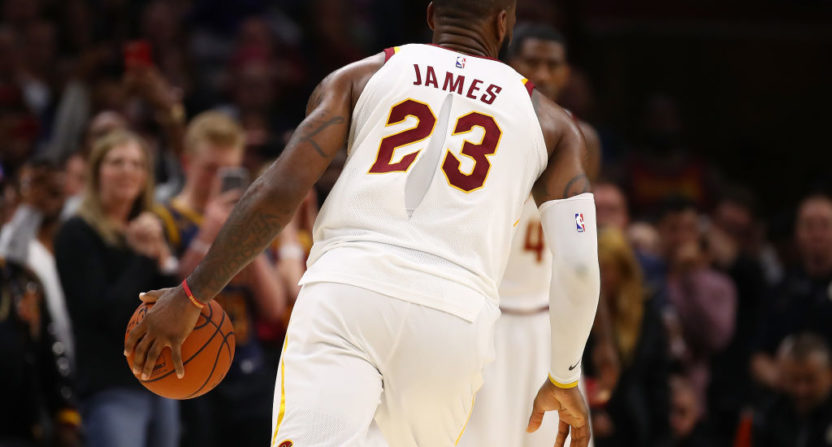 Nike took over the NBA’s jerseys and on-court apparel this year, and the early reviews were positive. The warmups look great, and some of the uniform tweaks from the Swoosh have been straight fire. (The Pacers look is so sweet.)

Early returns, though, have been hampered by the uniform’s tendency to, well, disintegrate:

LeBron’s tore on opening night, and there have been a few other incidents as well.

According to Darren Rovell, Nike is looking into the problem:

The company, which signed an eight-year, $1 billion deal with the NBA that began this year, said in a statement provided to ESPN on Monday night that the initial product presented to teams needs more reinforcement.

“Nike has always put the athlete at the center of everything we do and we have worked hard to create the most advanced uniforms in the history of the NBA,” the company said in the statement. “They are lighter and deliver great mobility and sweat wicking characteristics, and the feedback from players has been overwhelmingly positive. However, during game play we have seen a small number of athletes experience significant jersey tears.

“We are very concerned to see any game day tear and are working to implement a solution that involves standardizing the embellishment process and enhancing the seam strength of game day jerseys. The quality and performance of our products are of utmost importance and we are working with the NBA and teams to avoid this happening in the future.”

Rovell notes that no consumers have complained about jerseys purchased for themselves, which makes sense, at this point. Fans likely aren’t wearing them to play pickup ball (though if someone does wear a replica jersey to play a pickup game, they are 100% coming out gunning), and the types of stresses and tears that have taken apart the jerseys on the court aren’t likely to be as commonplace. (Fans likely aren’t filling out the jerseys quite like LeBron, either.)

However, it’s tough to look at them disintegrating on the court and not think there could be a long-term durability issue, after multiple wash cycles or snags on various sharp edges around your house. And fans haven’t had time to really do any kind of lengthy testing. However, Nike wants to protect their sales heading into the holiday, so expect a few more stories like this if things continue to rend in this direction.