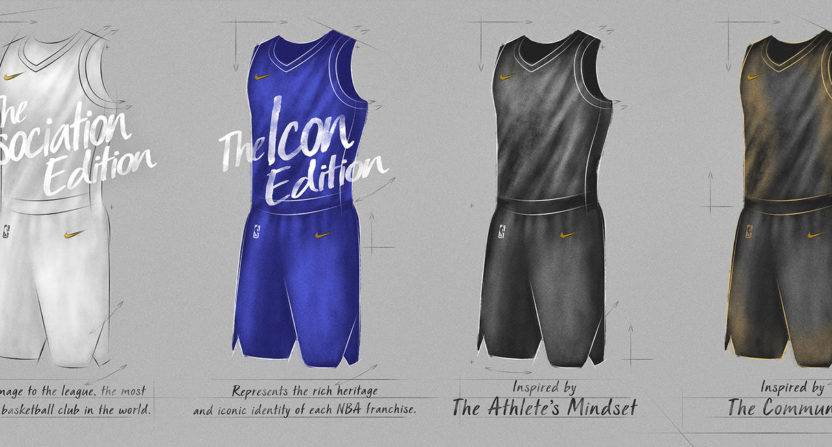 Always with an eye towards the future, the NBA and Nike has decided the days of the traditional home uniform and the away uniform are over.  The sportswear company recently took over as the official uniform-makers for the basketball league and they’re introducing themselves in a big way.

Coinciding with the introduction of the new uniforms, the NBA is eliminating its “Home” and “Road” uniform designations. Beginning with the 2017-18 season, home teams will pick which of their uniforms will be worn at all home games and visiting teams will choose a contrasting uniform within their own assortment.

Because of this change, Nike and the NBA worked together to create four core uniforms for each team, classified as “editions,” which draw from the rich heritage of the NBA and its respective franchises.

Because they’re Nike and they can’t let a simple idea remain simple, they’ve replaced what’s commonly known as the home and away uniforms with the “Association Edition” and the “Icon Edition.” The former will be the traditional home white uniform while the latter will focus on each team’s primary color.

Along with those traditional get-ups, Nike will also create what they call a Classic Edition uniform for eight teams in the 2017-2018 season. Nike says this uniform set “celebrates some of the most iconic uniforms in league history,” which just sounds like jargon-speak for “throwbacks.”

Nike was tight-lipped on what the fourth uniform will consist of, other than to say it will be “inspired by the mindset of the NBA athlete and the communities that support their teams through thick and thin.” Take that however you like.

As they’ve done for college uniforms, Nike will also unveil a collection of tights and socks that players will be able to wear in tandem with the uniforms.

Nike has already unveiled the Association and Icon sets for the Golden State Warriors and Sacramento Kings. While both uniforms are slight tweaks on the look, the bigger changes come in how the clothes are constructed. 3D-body maps of players were used to help designers improve the weight, fit, and construction of uniforms. The collars and back shoulders of the jerseys have also been updated for improved fit and agility. The hemlines at the bottom of the jerseys and shorts also allow for more range of motion than the predecessor. Alpha Yarns and recycled polyester were used to create the uniforms, which help to remove moisture quickly while promoting sustainability.

It all sounds like an interesting step forward in the world of sports uniforms, but, place your bets now for when the first instance of “we forgot to bring our Icon Edition jerseys with us” happens.